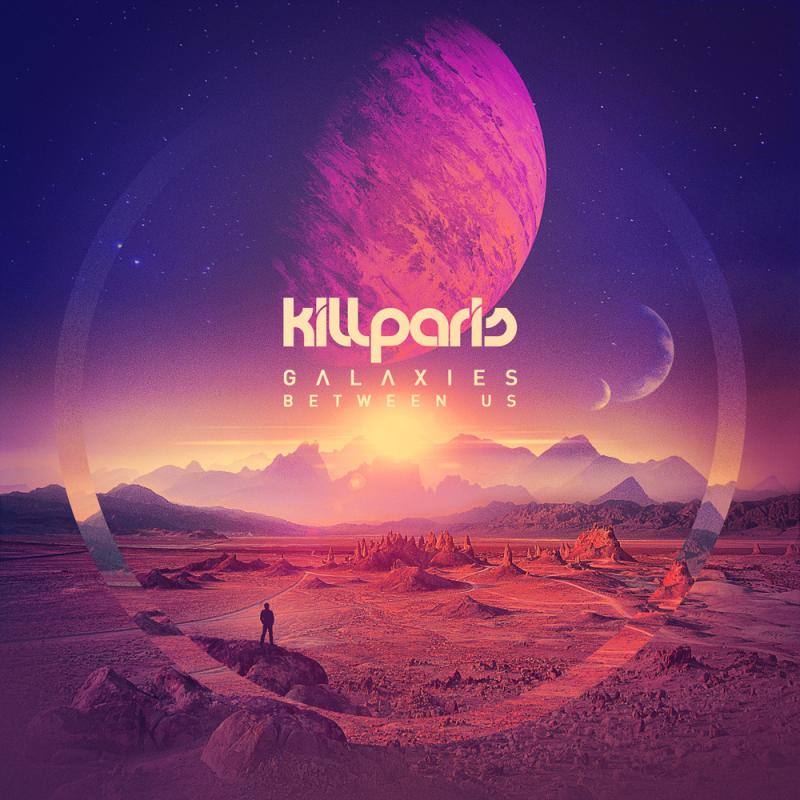 This year holds a stunning number of albums both out now and coming soon to the world of electronic dance music. Jumping into the fray with an album of his own is a producer known for his baby-making tunes and live keytar performances. Known to the world as Kill Paris, Corey Baker has just released his latest project Galaxies Between Us and it is worth a listen.

The first time I heard Kill Paris’ musical endeavors was through a tune that was (and still is) absolutely captivating called “The Love We Shared” (which was his version to the progressive house anthem “In My Mind”). Ever since, I have kept him on my radar. Seeing his music evolve from his debut EP To A New Earth to his revamps of classic tunes such as “Ring My Bell”, “Play That Funky Music”, and “The Ghostbusters Theme Song”, Kill Paris has taken the next logical step of his music career with Galaxies Between Us.

The album is a ten track LP that explores the most recent ventures into his signature electro-funk style with groovy basslines and moody synths. As the title suggests, the album teases ears with a sense of combining the soundscape of outer space with the emotional nature of having/losing love. Galaxies Between Us also serves as the first release off of Kill Paris’ label Sexy Electric and is available as a free download.

We are introduced to the stars with the first track called “Arrival” as it pumps powerful synths and bustling drums into the first minutes of the LP. With plenty of instrumental tracks in this album, Kill Paris makes it clear that he wants to demonstrate what he can do of his own accord with minimal assistance. The mood slows down with follow-up tracks “Gonna Get High” and “Summer Daze” that carry his crusade of funk and hi-hats across the stellar ambiance he’s crafted. From here, Kill Paris leads listening ears into one of my favorite songs of the album.

The first vocal track proves the pure talent Kill Paris has when working with incredible vocalists. Called “Operate”, singer/songwriter Royal and his vocal-prowess raise this tune to greater heights than the original could have ever done alone. The bass growls in contrast to Royal’s romantic tone only for the song to end in an abrupt manner. To pick us back up is the first single released before the album known as “Space Forest”. With this we see Kill Paris’ production at its absolute best and the result is a funk-trap hybrid that leaves my ears content.

Halfway through the album and we get to one of the more atmospheric tracks of the album. With “What I’m Feelin'”, listeners are left gliding through a travesty of melody and mystery in one of the most relaxing tunes in the entire album. It jumps back into the hard-hitting suave with “Blame It All On Your Ways” which features singer Marty Rod. Reviving his unique vocal talent that he had on the Kill Paris single “Falling In Love Again”, Marty’s voice is joined with some vocoder magic and bass guitar slaps making another passionate tune.

As we move towards the end of the album, Galaxies Between Us shifts gears to more four-to-the floor material and begins to stray away from what the first half of the LP sounded like at all. Kill Paris places an interlude (appropriately titled “Interlude”) with another wavy track that trades hard bass for tranquil tone. The chill wave continues with the second single of the album called “You Don’t Love Me No More”. The melodic edge and the robot voice combine with the grungier bass creating a strong lead into the album’s final song. In “Tropical Dinosaur”, we are treated to the only house-ish song in the album. Similar to what you might hear from guys like Kygo and Thomas Jack, “Tropical Dinosaur” on a faster, yet calm note ending our trip through the universe.

After listening to this album several times, I was surprised to find myself more calm than anything else after hearing it. Rather than go for an album full of “bangers”, Kill Paris goes for an ambient and personal feel with first album ever. However, taking this approach does not make every song as immediately re-listenable as I was hoping they would  be. This does not mean the songs are bad, but it does mean that they are meant to be a played and heard in the right setting. This is what makes Galaxies Between Us a special album in many ways (that and the fact that it’s free to download).