#FreeToMove Is Doing Something About Sexual Violence

The climate of sexual abuse and objectification in the electronic scene is finally getting some much deserved attention, but all the talk has been accompanied by a lack of action. Isabelle Comber has decided to do something about it.

She’s started a campaign with Stoney Roads called Free To Move, successfully rallying a collection of industry influencers to step up and do something about the rampant sexual abuse in the nightlife scene.

In 2014, a study by Drinkaware found that out of 1,198 women surveyed between the ages of 18-24, nearly one-third were groped or received unwanted physical advances during a night out. Only 19% of these women were at all surprised by what had happened, affirming Isabelle Comber’s statement, “the violence isn’t just common, it’s an accepted part of the culture.” It’s a sad day when someone feels comfortable wearing a shirt that says “Eat, Sleep, Rape, Repeat.”

This guy wins the award for worst fashion/lifestyle choices at @coachella. I’m not easy to offend, but this is shitty pic.twitter.com/fyjod24nAx

After one particularly horrific experience, Isabelle Comber wrote an opinion piece about harassment which quickly went viral. Shortly after, she began receiving recounts of sexual violence from women all over Australia, “Some guy rubbed his cock on me at a festival,” “Guys will press their whole body weight on me in the club,” “I no longer go out, it’s not worth it,” “I tense up any time I have to walk across a club.” The prevalence of such despicable behavior, especially in a community that touts itself as being based on unity and respect, is absolutely unacceptable.

“Sexual harassment is a major problem that was laughed off for so long and hopefully now people will realise that it is a real issue with real victims,” says Adam Campbell of The Cliff Dive. It’s all too common to hear horrific stories of sexual abuse, and the answer to eliminating this behavior is promoting discussion and awareness. It needs to be talked about. We all know about the drug related deaths at Electric Zoo 2013, but you may not have heard about the 16-year-old girl who woke up outside the venue, underneath a van with her pants down and legs bruised. She was taken to the hospital and doctors confirmed she was sexually assaulted. Instances like this are utterly revolting, and make me feel ashamed to even be part of the male population.

We’ve clearly failed at creating an environment where everyone is welcome and safe. “Large crowds combined with drinking and drugs make nightlife areas an easier environment for harassment to take place, and the scum of society take advantage of that,” says Pierce Ericson of Metric Events. Prevention is the best cure, which is exactly what Free To Move is advocating.

In their first installment, the interviewees agreed that a safe environment starts with the culture and attitude created by an events’ promoters.

“You have control when it comes to creating a culture around your events before they even happen, be it via social media or club night photography, so it’s important to harness those powers for the betterment of your patrons. Putting forward a message that doesn’t belittle or degrade either sex is essential before your night even starts.” -Pierce Ericson, Metric Events

Of course, event photographers have a secret. In the words of my friend and photographer Gilly, “Photographers string together all the best candid pictures to make the party seem like it was more exciting than it actually was. If they shoot portraits, they only show you the pretty people and the freaks. Their job is to give you that fear of missing out.” Often times these photos include ladies flashing the camera, guys flaunting abs, group make-outs, and more. The purpose of promotional media is to influence the audience’s perception of what happens at a particular party. It’s all part of brand management. Promoters and venues always want their party to be the wildest, most exhilarating experience.

Clubs are essentially an adult playground where people can decompress and enjoy themselves at the end of the work week. Kiran De Silva of Sydney’s Meanwhile comments that “Whilst nightlife may often present opportunities for the opposite sexes to attract, it in no way should ever constitute the crossing of sexual harassment line.” While G-rated advertising is not to be expected, promoters and management should be aware of the secondary implications of their branding.

What measures does your venue have in place to protect anyone who might be vulnerable to sexual harassment?

“Myself and the club have a zero bullshit tolerance factor. Essentially a one strike rule. If people mess up, and we catch them in the process (no matter the situation) then they usually receive a ban from the venue for a few months, and in extreme cases lifetime bans. This can encompass anything from harassment right through to people vandalising the property. The bartenders are great too and really have formed a strong bond with the promoter and extended family for the club, so everyone looks out for everyone. If anyone spots any strife it’s quickly reported and dealt with. Whether that’s harassment, violence, or plain idiotic behaviour that could harm others, I genuinely believe it needs to be dealt with swiftly, firmly and often culprits need to be made an example of.” -Daniel Petchy, Can’t Say

As a male commenting on the sexual abuse, it absolutely sickens me to see my female friends disrespected, but the harassment certainly goes both ways. Girls have called me a faggot for not wanting to dance, slapped me for declining a hook-up, and I’ve been wrongfully ejected from a show because a woman told security “I grabbed her tit” (It was a Techn9ne concert and she was furious that I bumped into her on accident while dancing). Harassment is never a joke, and abusing a venue’s one-strike policy makes a mockery of a serious issue. Of course I was a bit pissed off at the time, getting put into a headlock and thrown out for something I didn’t do, but I’ll gladly sacrifice such a mishap if it means a safer environment for everyone.

Pierce Ericson commented on Metric Events’ harassment prevention despite security limitations, “we also encourage our own staff (promoters, photographers, DJs etc) to keep an eye on things and to bring up possible issues with security, and also to take care of anyone who is looking a little worse for wear.” Looking out for patrons who may be in a susceptible position becomes even more necessary in an expansive festival setting where security is vastly outnumbered. “Our ethos revolves a lot around ‘party unto others as you would have party unto you’,” says Clint O’Hanlon of The World Bar. It’s up to us to watch out for one another. It’s really not that hard to be a decent human. In fact, it takes far more work to be an asshole. 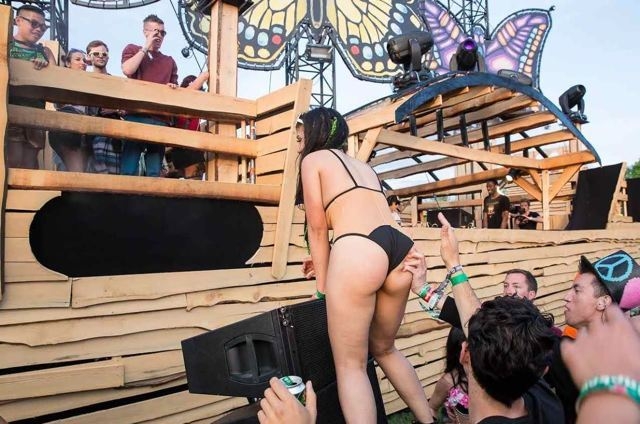 When asked about the importance of creating a safe party space, the response was unanimous:

“It is the number one priority.  You can’t party if you aren’t comfortable in your surroundings, knowing that you will be safe.  I want to have a venue where guests can come in by themselves for a drink and not be worried about being harassed by every second Johnny that stands near them. Guests should feel that they could communicate any problem to any member of staff and see a positive outcome.” – Adam Campbell, The Cliff Dive

“It’s essentially the most important part of our business. If people don’t feel safe, people won’t have fun. If people aren’t having fun no one will come! You need to look after the people who want to hang out at your events, and of course it’s just being decent human beings!” -Pierce Ericson, Metric Events

In the end, the interviewees all agreed it’s 100% up to the patrons as to where they take their business. If good times aren’t being had at club X, you’re always free to leave.

“There should be no price to pay for enjoying a good fucking party jam; it’s about time we were all free to move.” -Isabelle Comber

If you represent a venue or events company and would like to give statements for the next installment of #FREETOMOVE Handbook, contact [email protected].

I’d like to extend a massive thank you to Isabelle Comber and all the companies involved in the campaign for taking a stand: Can’t Say, Meanwhile, Metric Events, The Cliff Dive, and The World Bar.

To learn more, check out the Free To Move Facebook page, and join the discussion with #FREETOMOVE. You can read the interviews of the first handbook installment here.

Ted-Ed: The Science Behind Songs Stuck In Your Head

Ted-Ed: The Science Behind Songs Stuck In Your Head