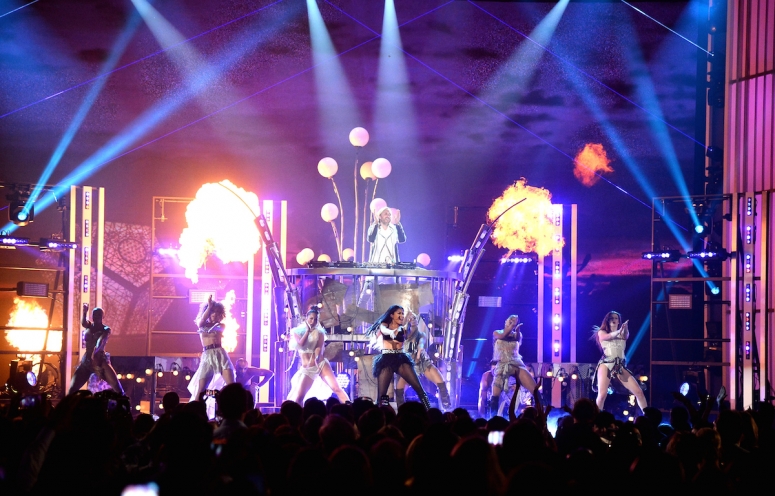 However, even for a lay man, it’s quite easy to recognize when something stolen is identical to the original. That’s the case we have on our hands now with the stage design from David Guetta and Nicki Minaj’s performance at the Billboard Music Awards.

It turns out that the stage installation at the BBMAs, a shape called a dodecahedron, is a near-exact match to an art installation at Burning Man by the group HYBYCOZO. Take a look below at a side-by-side comparison of the HYBYCOZO dodecahedron (L) and Guetta/Minaj’s stage sculpture (R).

“The size looks similar at six feet tall,” says designer Yelena Filipchuck. “The pattern attempts to be a copy, we zoomed in and the composition of the pattern matched exactly [a circle in a pentagon] on a grid of lines coming out of the corners. The shape itself even had the same thicker darker edges, glowing from the inside and matched the distinctive laser-cut repeating patterns that we are known for.”

Any person with eyes (or even a blind person who had the opportunity to touch both objects) could see that it’s a 1:1 match, even with corresponding geometric patterns in the interior.

“It was so egregious that people who weren’t even that familiar with the project sent us messages asking us if we did the stage design!”

It’s clear that Guetta at least appreciates the aesthetic of the desert festival. Guetta has not yet responded to THUMP’s request for comment.