If you’re not excessively tech savvy, it would be okay to forgive you for not knowing about WWDC, Apple’s Worldwide Developer Conference, going on this week. Apple is currently/just gave their Keynote speech, and in addition to news about the new iOS, they revealed a whole host of new information about how they’re looking to place a large foothold in the music world, including streaming, social media, and more on a single app – Apple Music.

Containing three key components, Apple Music will allow users to stream content, access a 24/7 radio station, and connect with artists via a dedicated social media platform. And that’s really only the bullet points. This is an all-encompassing platform that looks to push out multiple major competitors all at once.

First off, the main component of Apple Music – its streaming platform. Taking music from the entire Apple Music catalogue (over 30 million songs), you can playback content from nearly any device. This is nothing new. However, Apple desires to blend components of multiple different streaming platforms including Spotify, Pandora and Soundcloud into one app. Curation will be a large part of the app, which could be the reason they struck deals with Drake, David Guetta and Pharrell earlier this month. (More on Drake later.)

In addition to human curation, Siri® is also dedicated to helping you enjoy great music and have fun with Apple Music. Ask Siri to, “Play me the best songs from 1994,” “Play the best FKA twigs song,” or “What was the number one song in February 2011?”

Next up is the radio. Surviving the remnants of the flopped iTunes Radio & acquired Beats Music, the newly created Beats 1℠ (that “sm” is a service mark, for those wondering) serves as a 24/7 radio station with streaming content heard around the world simultaneously. It will be led by DJs Zane Lowe in Los Angeles, Ebro Darden in New York and Julie Adenuga in London, and will feature “exclusive interviews, guest hosts and the best of what’s going on in the world of music.” 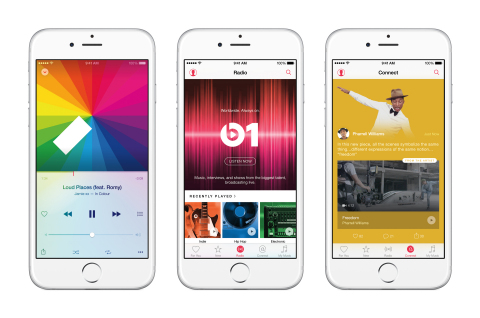 Finally, Connect. It’s a simple social media platform that seems to be a revival of iTunes’ failed platform Ping. This time around, it’s integrated into the app, which should improve its ease-of-use and all-around functionality. However, it will largely hinge on how it is used by the artists that we care about the most.

Through Connect, artists (signed and unsigned, which is huge for Apple) can share lyrics, backstage photos, videos or even release their latest song directly to fans directly from their iPhone. Fans can comment on or like anything an artist has posted, and share it via Messages, Facebook, Twitter and email. And when you comment, the artist can respond directly to you.

It also seems that Connect will be integrating functions paralleling that of Tidal, with artists releasing their content exclusively through the platform – for instance Drake, who will be releasing his next album through Connect. (Told you we’d get back to Drake.)

Apple Music will launch on (nearly) all Apple devices on June 30th. Users will be invited to an initial free 3-month membership, after which a $9.99/month subscription fee will apply. There will also be a “family plan providing service for up to six family members available for just $14.99/month.”

Apple Music will be coming to Apple TV and Android phones this fall.

And in case you were wondering, Spotify CEO and founder Daniel Ek already responded to the news.