With Tomorrowland‘s recent expansion to Brazil, and spawning of United States-based little brother, TomorrowWorld, the next frontier was clearly towards the East. With the recent enormity of success behind EDM tours in the country of India, it didn’t take long for the behemoth entity behind it all, ID&T, to capitalize on the opportunity.

In fact, they just (seemingly) accidentally uploaded a ten second video to the Tomorrowland Faceboook page, which was then quickly removed. The video didn’t tell us much, but the description unveiled quite a bit… Check it all out below. 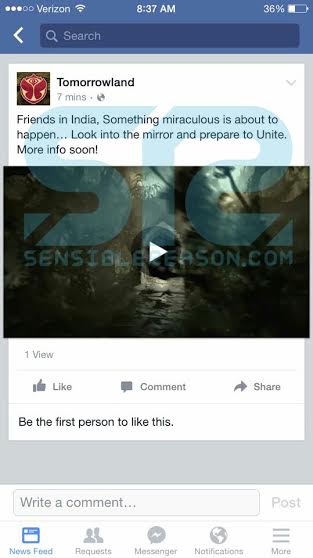 Although this is in no way confirmation of Tomorrowland India, it’s a pretty hefty hint – to say the least. Teasings of a Tomorrowland Goa were spun last year, but were quickly quashed, “Like I’ve mentioned, that is not true,” says Tomorrowland’s spokesperson and press coordinator Debby Wilmsen. “We organise TomorrowWorld US together with SFX, maybe SFX has plans to do an event, but Tomorrowland is NOT coming to India.” However, that was this year. Next year is a different beast entirely.

Meanwhile, Tomorrowland in Belgium just announced their headlining sets for the main stage. Check out the lineup here.

Tomorrowland Brazil’s after movie was also just released today, and epic doesn’t even begin to describe the visual ensemble at hand.