Daft Punk Before the Helmets

To create and execute an effective stage performance of any kind, several factors must always be in place. First, of course, is the actual content of the show. The music, musical, play, dance, etc. must be captivating enough to hold the interest of the audience for its duration. If the experience of watching the event turns into an uncomfortable study of the performers’ attempts to battle stage fright or their own equipment, the entire production fails in its efforts to seamlessly transport the viewer to another world. The need for rehearsal, knowledge of on-stage tools, and ability to improvise under pressure become essential components in the mission of maintaining the stability of the fourth wall. When this meticulous, behind-the-scenes work operates in tandem with the viewers’ personal reception and expectations (or lack thereof), the true magic and wonder of the stage is revealed.

It is partly through this attention to detail and portrayed image that the robotic duo Daft Punk is able to hold their sparkling reputation. With shows that are planned down to the second, famous disguises that bring with them an ongoing sense of intrigue and mystery, and extremely strict, thought-out schedules for the release of music and new information, it’s no surprise that Thomas Bangalter and Guy-Manuel de Homem-Christo have continued to excite and inspire a harshly dedicated global fan base for so many years. From their humble beginnings, the two have made their interactions with the outside world of paramount importance within their overall careers.

We’re not performers, we’re not models – it would not be enjoyable for humanity to see our features. But the robots are exciting to people. . . When you know how a magic trick is done, it’s so depressing. We focus on the illusion because giving away how it’s done instantly shuts down the sense of excitement and innocence.

The duo embodied these ideas long before they were Daft Punk, however. Following the break-up of their first band Darlin’ with guitarist Laurent Brancowitz (the eventual founder of indie band Phoenix), Thomas and Guy-Manuel began creating electronically produced albums in Bangalter’s bedroom. After passing a demo of “New Wave,” their would-be first single as Daft Punk, to the heads of a techno label at a rave in EuroDisney, the boys began performing shows wearing disguises. From simple black bags over their heads to clown masks to Beavis and Butthead, they knew from the beginning that dance music was something to be enjoyed rather than dispassionately examined.

Sometimes I think dance music is too cold, y’know? We don’t really take it very seriously. 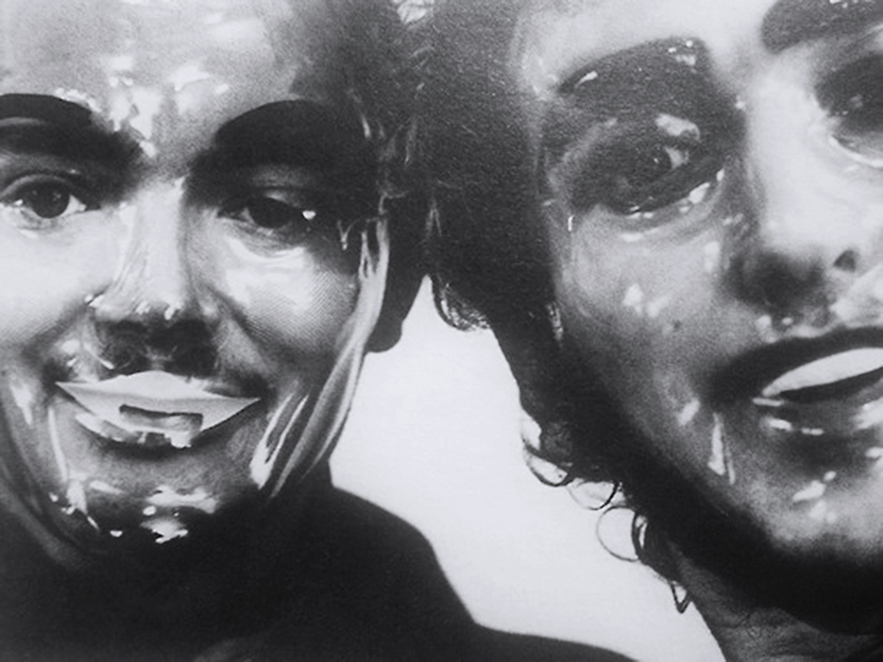 It was through these cryptic artistic identities that the image and soul behind their music was born. By creating an entire production for their performances, Daft Punk was able to introduce humanity and real artistry to the electronic music scene, separating themselves from the intensity of the other creators at the time.

This was more energetic; people were smiling. . . A lot of electronic music is very cold. Rock has a certain warmth — that is a good thing about it, and soul and funk and disco too. We were not interested in doing really dark music. Our music is not stupid happy house, but it makes people happy.

The addition of the iconic robot heads didn’t come until an accident occurred in their studio in 1999.

We were doing a track and our sampler crashed and exploded and there were sparks. We were hurt a little bit so we had to make a little surgery and then we became robots. Everything was erased, we had to start all over again. . .

It was then that the two dedicated themselves to the robot personas for good. With the destruction of their equipment and music, they realized that it was indeed time to begin a new direction in their music careers. Since then, the masks have remained on and the legacy of Daft Punk has only continued to strengthen.

By completely separating their robotic personas from their personal lives, Thomas and Guy-Manuel seem to be living in the best of both worlds. As Mic.com says, “They create universally respected records. . . get multimillion-dollar recording budgets and maintain a ravenous fan base. But they can still walk down the streets of any major city and go almost completely unnoticed.” This separation allows the duo to create a full-fledged, untainted, immersive performance spectacle without comprising their own identities in the process. Unlike nearly every current electronic artist, the experience of seeing Daft Punk is as much a stage play as it is a concert. By embodying unique characters and crafting a fictional universe around them, Daft Punk fosters a genuine sense of fascination, awe, and magic in their viewers, greatly outweighing the general “hype” of their presence that most artists choose to emit.