Though I’ve never been to Burning Man, I know of its impact and vibe. That right there is sort of the problem, or at least the beginning of it.

What started out as an underground escape for those feeling like they don’t necessarily mesh with traditional society has become a getaway for large Fortune 500 companies including Facebook, Google, Twitter, and Uber. While the majority population at Black Rock City remains people who want to expand their mind, more and more people who only want to expand their wallets are encroaching.

Magnetic Magazine found out about a travel agency called “Burning Air” that is profiting on the remote location of Burning Man, and giving CEOs and 1%’ers the ability to arrive in style, class, and comfort – something that is utterly opposite the core values of the Burn.

Avoid the traffic and travel in style with Burner Air flights to Burning Man from Los Angeles, San Francisco and Reno.
All Burner Air flights land on the playa at Black Rock City Airport so you can be at your camp within minutes of landing.

A large part of the experience of Burning Man is the journey getting there. A friend of mine went last year and was stuck in the downpour on the first couple days on the road to Black Rock City. I was regaled with tales of burners getting out of their cars, setting up grills and shops and trading goods and and items to help others stay warm and dry. I even heard about a tattoo artist who began giving free tattoos to others stuck in line, just small little pieces, but a community building effort nonetheless.

Those flying in via plane in the comfort of their Cessna will never experience that joy. 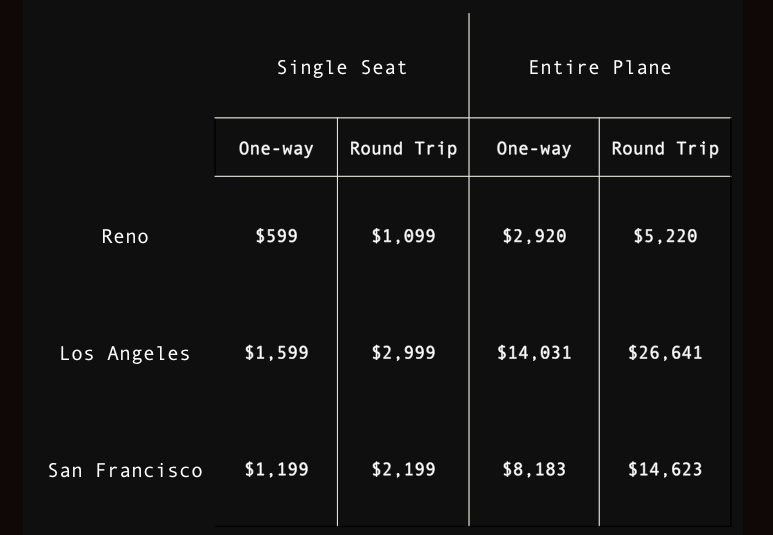 Prices range from $600 to $27,000 depending on your direction/origin of travel and desired level of comfort. And with scalped Burning Man prices soaring higher each year, we fear that what originally made Burning Man so great is being slowly eroded away, like the desert that it’s in.

Deadmau5 Gives One Of His Most Diverse Performances At Bonnaroo [Video]