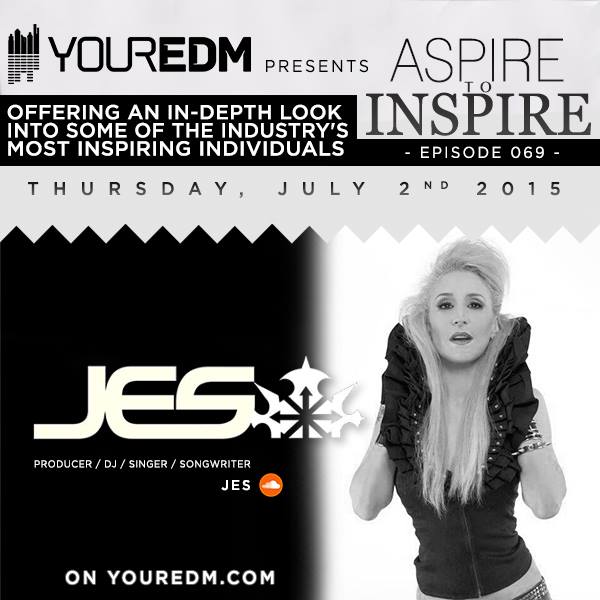 Musical inspiration comes from every type of atypical (and not so atypical) emotions that have spawned from interesting life events. Everyone experiences life a little bit differently and can impact a certain person in a unique way. Whether you are a listener or a musician, music is powerful and it inspires people on a daily basis.

JES, aka Jes Breiden, grew up in a musically inclined home in New York City. Her mother was a theater and commercial actor, which ignited an interest for music in JES at a very young age. JES knew, at the mere age of 5, what she was born to do.  She wrote her first song by the age of five.  Since then, JES has become a singer, songwriter, composer, producer, and DJ.  Let’s just say…she is a jack-of-all-trades.

With great success, comes a story of turmoil and hardships in JES’ case. Being a teenager in NYC is already difficult enough. On top of being constantly stimulated by dense city culture, life at home wasn’t always harmonious. Her deeply artistic family was very passionate, which often led to differences of opinion. JES’ close relationship with her younger sister meant that she sometimes felt responsible for the family’s moments of instability. Realizing that creating some space might actually bring them closer together, JES moved out of her parents’ home at the age of 16.

JES describes her teenage self as a “wild kid.” She had already recorded her first professional session at 14 and secured her first production deal at just 16. She was always looking for the next band to be a part of and was a member of several Pop and R&B groups in NYC during that time. In addition, she looked for the coolest parties to attend so she could network within the entertainment business. After a series of many unfulfilled deals and many ups and downs, she decided to move to California. While working in a recording studio in Hollywood she met Mike Olson. Olson was very well versed in Trance, and they formed a duo called Guardians of the Earth. From there, JES’ career in electronic music exploded.

In 2003, JES formed a group with Josh Gabriel and Dave Dresden (aka Gabriel & Dresden), known as Motorcycle. Together, this trifecta created one of the largest hits in EDM and pop music of all time.  The song, “As the Rush Comes”, conquered #1 Hot Dance Airplay Billboard Hits and  #1 Year End Billboard Hot Dance Airplay in 2004, as well as received the Billboard Top 10 Songs of the Decade for Hot Dance Airplay.

By 2006, JES continued to pursue her music dream as a solo artist and was signed to Tiesto’s label, Black Hole Recordings.  She has been a part of two Grammy nominated albums, BT’s “These Hopeful Machines” and Tiesto’s “Elements of Life”, and has gained a plethora of IDMA awards, international songwriter awards, satellite radio play, and the list continues to grow to this day.

It takes a special kind of person to make it as far as JES has in the entertainment industry.  It is a war zone out there and tough skin is a necessity.  Considering males are the dominant gender in the industry, it makes JES’ story even more admirable. She has had to endure many resilient phases being an artist. JES reminisces on how easy it was to lose herself and forget who she truly was from time to time.

Striving to be an artist at a young age has both positive and negative aspects.  One thing is for certain; the life lessons of a passionate artist create really beautiful music that has a lot of soul and meaning behind it.  JES’ music is all about hope, dreams, and continuing to create.  Her life experiences have made her very in tune with her body on a mental, emotional, and spiritual level and she hopes that her fans can take something away from that.

Today, JES continues to create music, tours around the globe, meditates, and lives a healthy vegetarian lifestyle. She may have had a harder than average life but she wouldn’t change it for anything. She states, “It’s really hard to be positive all the time but it really is a choice.” Every day JES is working on being the change she wishes to see in the world.