As the years pass, Los Angeles’s HARD Summer Music Festival continues to see steady and exponential growth in nearly all aspects. From the number of ticket sales to the amount of police on patrol, the event doesn’t appear to be slowing down any time soon. Following last weekend’s installment at Pomona’s Fairplex, and its two tragic fatalities, the San Gabriel Valley Tribune spoke to several of the festival’s most involved facilitators about the logistics surrounding this year’s event and the changes that they feel need to be made in the future.

There is no way you’re ever going to stop that with that particular genre of music and concert. It’s tremendously difficult to address, because you have to understand the culture, and why people do these things. These aren’t gangsters, or even druggies that are going to these things, they’re just people wanting to have a good time. It’s unfortunate that ecstasy got introduced into (the scene), and kind of made its home in it.

L.A. County Sheriff Dan Whitten organized the police presence at HARD, reaching nearly 400 officers on the grounds in 2014. Even though the local police force has been able to deploy as much manpower as they can spare to help keep the festival goers safe with the cooperation of Live Nation, Whitten understands that confiscating all drugs and keeping an eye on every attendee is an “impossible” task.

You just do all you can and try to keep people safe. My experience with Live Nation — they were very responsible. It cost them an arm and a leg, but they did everything we suggested that they do when it comes to safety. They had more medical staff than I’ve ever seen, every cop I wanted to put out there, they said ‘OK.’

The patrons, like every year, must pass through several reams of security before entering the grounds. They are patted down, given amnesty boxes to empty their illicit substances at the gate, and can even be exposed to drug dogs. Live Nation supplied two medical tents, three emergency room doctors, 13 registered nurses, and 63 medical technicians. Despite these measures helping to prevent possible health and safety hazards within the festival however, HARD has not gone without casualty in the past two years.

In 2014, a 19 year old girl died from a supposed ecstasy overdose. This year, we saw two more fatalities along with 49 patrons who were sent to the hospital in an emergency state. Live Nation stated that they were only aware of 37. These numbers take a toll on the local community as well, as they clog medical workers’ availability to others in need around the city. Los Angeles County Supervisor Hilda Solis continues:

When there are large increases in emergency room utilization, paramedic responses and trauma center needs as was seen at the Fairplex last weekend, the health and safety of our whole community are impacted. 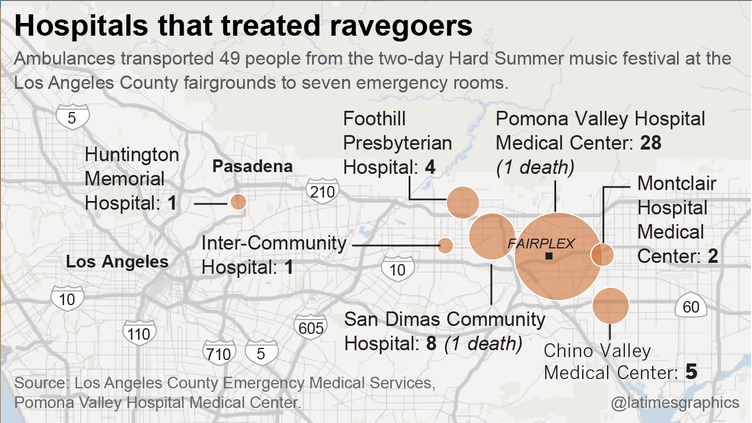 This Tuesday, the Los Angeles County Board Of Supervisors decided to take a vote on the banning of future electronic music festivals in the area. Live Nation, while being cooperative with the investigation and vote, has stated that HARD had been cleared with all relevant government agencies and the Fairplex’s own management. Local doctors have spoken out in support of the ban however, claiming that one of the only ways to prevent future fatalities is the end to large-scale events like these.

Some believe that the solution to the problem is a reduced number of ticket sales. By scaling down the size of such large events, the ratio of attendees to available security forces will be more manageable. This poses a problem to the community however, as festivals such as HARD bring in millions of dollars to the local economy. Without this help, the county will surely feel an impact. Deputy Whitten doesn’t believe preventing people from attending festivals will work in the long run, and thinks that they are ultimately safer at organized events than they would be at underground raves.

If you don’t allow them, in my opinion, they’re just going to go back underground and (people are) going to die anyway. Something as structured as HARD Summer, they’re going to do everything they can.

At the end of it all, it seems that increased education and awareness is one of the only harmless methods of quelling some of the danger and misinformed behavior surrounding the drug culture within our scene. By understanding the risks associated with consuming drugs, and knowing exactly what to do in an emergency situation, attendees will be able to act in a more responsible and safe manner within the grounds.

While many claim electronic music events to be the most dangerous and drug-fueled, it’s difficult to entirely believe after looking at instances like Keith Urban‘s “Raise ‘Em Up” tour stop in Mansfield, Massachusetts last year. With 22 hospitalizations and 55 arrests, the local Fire Department was forced to declare the show a ‘Mass Casualty’ event. This concert held only 18,000 patrons, compared to HARD Summer’s 63,000 on the first night. While it by no means justifies the safety hazards at the latter event, looking at this comparison helps to equate the electronic music scene alongside others like country and rock.

It seems that Los Angeles Mayor Eric Garcetti agrees, following a recent statement made about the continuation of electronic music events in the future. He believes that the two deaths were not caused by the sort of music being played, but because of poor management on the festival’s part.

I think it’s bad management. I think people need to manage concerts well. So I’m very sympathetic to [Los Angeles County] supervisors who are making sure they get to the bottom of what happened in this tragedy.

As HARD’s Day Of the Dead festival approaches, we hope Live Nation and Los Angeles’s police and medical personnel can cooperate on a structure that ensures an end to the fatalities that have become all too commonplace at such events.