Dannic’s Rise To Stardom And The Future Of His Music

After his 2009 immersion into the EDM scene, Dannic has quickly become an international sensation amongst music lovers. To everyone’s delight the Dutch artist continually travels the world to spread his beats to the masses.

During his most recent North America Tour, Dannic played a beach club set in Las Vegas before stopping in Seattle. Headlining at Seattle’s own Foundation Nightclub, Your EDM got a chance to sit down with the renowned artist to talk about what it’s like to be one of the world’s favorite DJ’s:

YE: So this is about to be the second show of your “mini-tour,”  how are you feeling going into it?

D: A little jet-lagged but that’s usual. I just finished my summer tour in Europe, which was crazy, uh but great, so ya I can’t complain and I’m always thrilled to be back in the U.S.

YE: How do you keep that momentum going? You must get exhausted.

D: Ya, but it’s exhausting and it’s energizing at the same time because if you have good shows it’s like the crowd just instantly ahh refreshes or gives you more energy.

YE: Do you get that so much so in North America that you just have to keep coming back?

D: Ya and I think I am in the states about every month because of my residency in Vegas at Drai’s. I just played the beach-club today.

YE:  Day shows, night shows, do you have a preference?

D: Um, ya night shows for sure.

YE: Because of better energy?

D: Ya, I love to read reviews at night, I’m more awake at night…I don’t know what it is but you know, I was born that way. 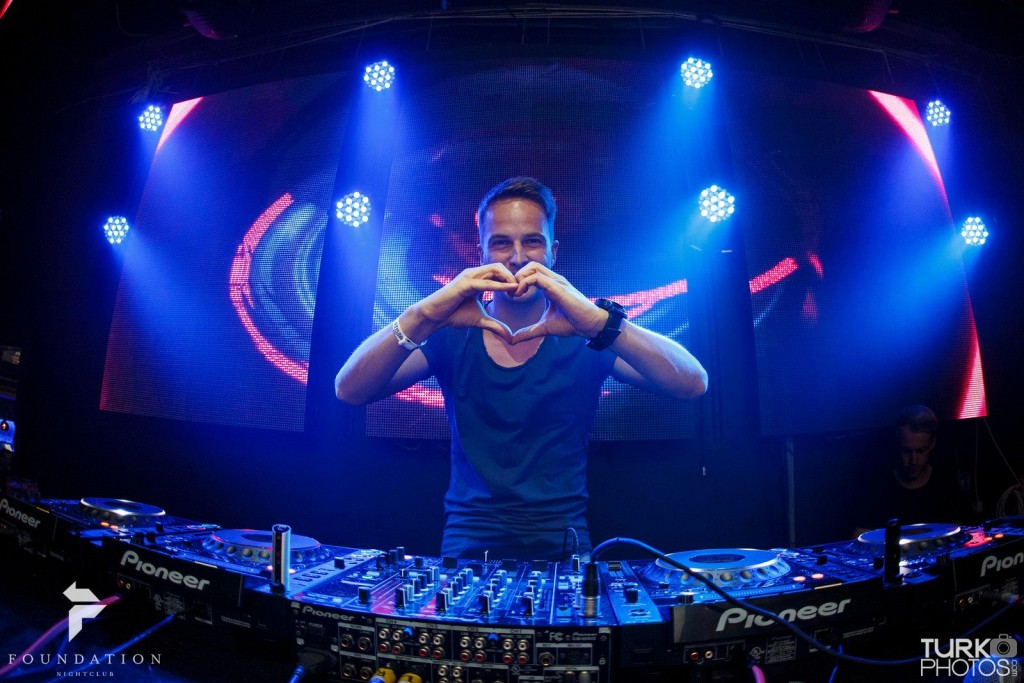 D: That definitely changed my life because I was djing on the side as well as a day job as a marketing manager. So ya it really changed my mind in the fact that you know I never wanted to be like an international DJ. But then that changed it because I had the chance to play for 20,000 people in my hometown. And then I was like holy shit this is addicting!

D: Ya Breda, Netherlands. So it was super addictive and I was like wow maybe this could work, ya know?

YE: So that was your first glimmer of hope?

D: Ya! That was my first glimpse of what it could be. Because I was djing in bars and I was playing all kinds of music, with open format. I was playing in a club as well and I was like trying to make my own music.

YE: Oh so you were kind of starting to produce around that time?

D: I was really starting to. At that time I had like one or two bootlegs I made and I was really feeling it after that contest.

YE: I can imagine after getting all of that recognition.

D: Ya, I was like I can do this! But then again I was still working on my day job and that struggle was real. I was really working at day and then at night I was producing and just trying to make it work.

YE: Well obviously it has paid off in the last couple of years for you!

D: Ya, definitely! When I quit my job, with the help of my parents because they were really supportive, that’s when it really took off.

YE: That’s wonderful they were supportive of you all throughout those 10 years of djing in bars and clubs.

D: Ya, it really is. And I am still so so thankful for that. 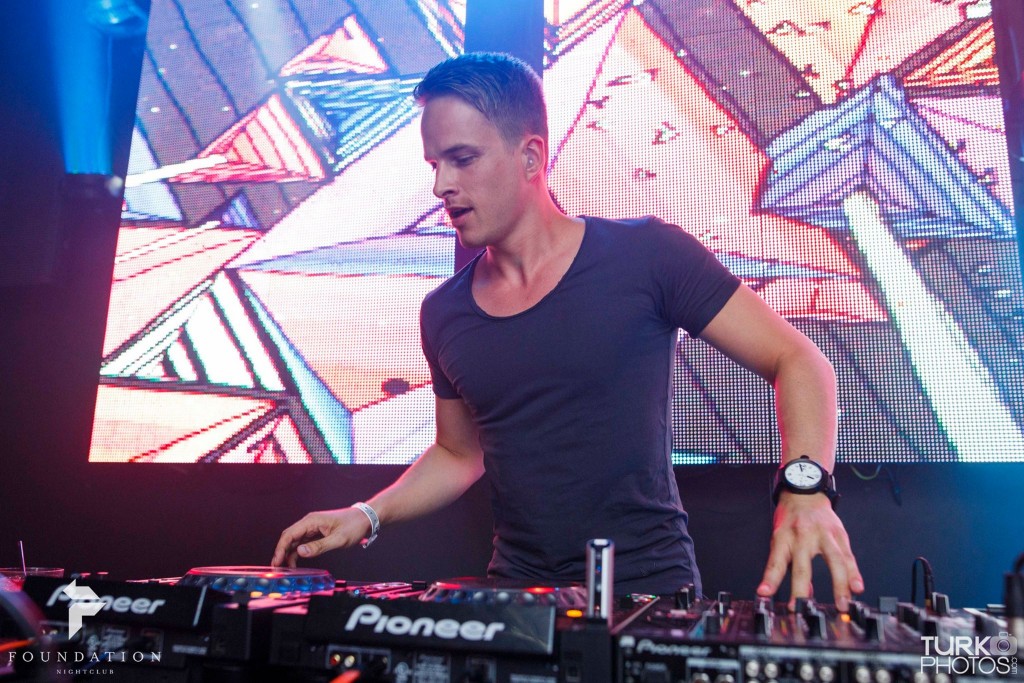 YE: So you said a few years back that you see yourself as more of a DJ who then started producing. Do you still view yourself that way even after your immense success as a producer?

D: Ya ya ya, and I love to produce, but there is nothing better than playing it out loud and seeing the crowd’s reactions to something you’ve made on your own.

YE: So you thrive off of that interaction with the crowd?

D: Ya, I don’t know what it is but that’s my thing. I play with the crowd. Like even today at the beach club, at Drai’s, I was playing an open format set just because I was feeling the vibe, energy, or whatever you like to call it. And I think that’s what DJing is all about. It’s just playing music at the right time and the right moment based off that interaction with the crowd.

YE: Is it safe to say then, that you enjoy DJing more than just being home on your computer making music?

D: Ya, definitely! I mean I am still growing every day and I still have a lot of goals and a lot of dreams. I am actually starting my own label, which was one of my goals! I am launching that in October during the Amsterdam Event. Can’t tell you the name yet but I just needed that platform for all the guys I’m supporting in the background right now. One of those guys is Tony James and I just released a new track with him. I had the Dannic selection feel but that was like once every few months so I just needed that platform for something of my own. It has been a roller coaster the past few years!

YE: Are a lot of those DJs, that will be on your label, more local artists from your hometown or from all over?

D: No, no it doesn’t matter! They are from all over the place. People that I have maybe even inspired! I see a lot of guys that are not copying but are trying to make that Dannic sound and I think that’s something I want to enforce on my label.

YE: Now this “Dannic sound” you speak of, I have to ask you to elaborate on that!

D: Ya, ya of course! For my label I’m actually going to release a review that reveals about all of the “Big room,” all of the more progressive house maybe. My label is going to be all about groovy big room. I released Clobber and Ignite on tour, and that’s the kind of sound I’m searching for, like really energetic. Like back in the day I got support from Swedish House Mafia and all those kind of guys and I still love that sound. Like, the track Funk I just did could have easily been released on my label.

YE: Ok, now that you mentioned Swedish House Mafia: I know a lot of fans are eager for maybe a trio of you, Dyro, and Hardwell to create like a Dutch House Mafia. How do you feel about that?

YE: Is that ever a struggle to coordinate?

D: Ya a little! I mean Dyro is going his own way, I have my own thing, and then Hardwell is as well. So it’s really hard to combine all of those individual styles. But we collaborate very well together while still maintaining our individual unique sounds. It’s going to be awesome.

YE: How do you feel about you, Hardwell, and Dyro kind of being dubbed the trio that defined the genre known as big-room house? Does that add any pressure on you at all?

D: No, I don’t care really care about terms of like big room or genres. I think we show the world or the people and fans that we can make different music individually. And I hate to be thinking inside of a box. I like to try to think outside of the box. Music wise, I think I will surprise some people in the near future, and the same goes for Dyro and Hardwell.

YE: So do you have any other current collaborations in the mix besides the one’s you were just talking about?

D: Oh ya! I am really happy with the collaboration with Sick Individuals when we did Blueprint back in 2012 and we just had to do another one because our sounds blend so well together. We actually sat down in the studio I think about a half a year ago and made something that we weren’t quite sure what to do with. And actually, that whole idea went into the trash and we started a new project in my studio. And it was there within like twenty-four hours. I played it at Tomorrowland and I am super happy with the results.

YE: Any ideal artists you would like to work with in the future, EDM related or not?

D: Adele. For sure. Ya I want her vocals, I love her voice. Whenever she starts singing I get goosebumps right away. So I think that we would combine perfectly.

YE: Are there any other artists that gets this reaction out of you?

D: Well actually I just did a collaboration with a new singer from Breda. It is called Light the Sky and that’s kind of my first like crossover-ish track.