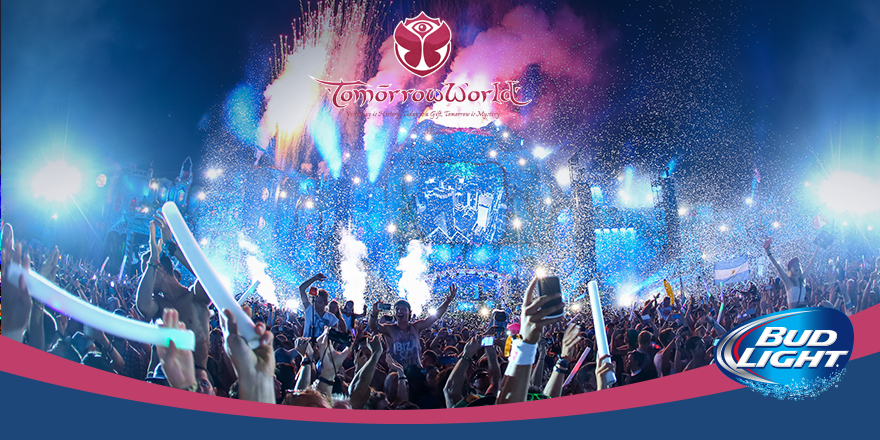 Bud Light Teams Up with TomorrowWorld For Limited Time Offer

In a move that may prompt many to ask if there’s anywhere that Anheuser-Busch won’t promote its brands, Bud Light has just announced that it will be teaming up with the highly anticipated festival TomorrowWorld. The festival, happening in Cattahoochee Hills, GA, is set to kick off this weekend.

Earlier this summer, Bud Light spearheaded a massive participant-heavy marketing campaign to create buzz for its own relatively new summer festival: Whatever USA. From New York to California, brand reps descended into demographic-specific bars, bearing touch screens and inviting drinkers to create reaction videos for a free beer and a chance to win tickets to the Whatever USA 2015 festival. But this time around, Bud Light has drawn on the more traditional power of association to get its product out there.

This year’s contribution from Bud Light starts with its release of TomorrowWorld themed cans in six different colors. According to adweek.com, only 85,000 of them were created for both the festival grounds and in the Atlanta metro area, obviously making these novel cans a limited time offer. In addition, Bud Light will have its own specialty viewing area for the main stage and even its own ‘Whatever’ themed camp section of Dreamville, TomorrowWorld’s dedicated campground.

Although TomorrowWorld will end up being wildly different from Whatever USA, this isn’t the first time that Anheuser-Busch has embraced the EDM fan. In one instance that goes back as far as fall 2012, Budweiser’s Made in America event division threw a massive free party in the historic Roseland Ballroom in NYC that hosted Big Gigantic and offered fans free food from carts seemingly wheeled in off of the street, and as much free beer as they could drink.