Think back to a time where you felt like an underdog. Maybe you were playing a sport and you faced a team much better than yours or maybe you were the first person in your family to go to college. Now…think about your resilience during this time. Did you give up or did you overcome the odds? I think it’s safe to say that a majority of us have felt like an underdog at some point in our lives. If this is you, then I urge you to read the following story of Utah’s biggest EDM event promoter, V2 Presents.

The story of V2 began in 2003 when two promoters, Brandon Fullmer and Jeremy Moreland, came together to throw raves in Utah. The two had been into electronic music for years and had attended underground events in their hometowns – Jeremy in Atlanta, Georgia and Brandon in Salt Lake City. In 2005, they threw their biggest event at the time: Versus 2. Versus 2 was set to happen outdoors in the very religious county of Spanish Fork, Utah (about an hour south of SLC). Even though they received a permit for the event, the city still hated it. This didn’t stop them. Everything ran smoothly during the day until something unexpected happened at about 9:45pm – a swarm of police and men in military suits stormed the scene and shut the event down. The police ripped up the Versus 2 permit, and confiscated drugs that were previously taken away by legal security for the event. Then soon after a helicopter came barreling over the mountains and the crowd was terrorized. There was tear gas, individuals were tazed and forced to the ground, 60-70 people arrested…horrifying, right? It’s a similar scene to the police brutality we see in the news today. If you don’t believe me, just watch this video…

The aftermath of Versus 2 quickly gained international attention thanks to articles from various news sources and a blogpost from Nick of Evol Intent (aka Bro Safari). Since the police went against their rights, Brandon and Jeremy approached a civil rights attorney to sue the sheriff’s department. Unfortunately, they didn’t have the man power or community support backing them to have a shot at winning the case. They lost the lawsuit and the sheriff’s department was dismissed with prejudice.

Community support was hard to come by because people were just outright terrified. At a time when literally all of the odds were against them, Brandon and Jeremy mustered up the courage and didn’t back down. With the support of their family, friends, and The Great Saltair (a historical amusement park turned concert venue), the two were able to get back on their feet and produce shows that were more accepted by this religious-based community. They now branded themselves as V2 Presents and continued throwing shows in Salt Lake City at the aforementioned Great Saltair.

This new V2 venture proved to be a very successful move. Hosting electronic music events in Salt Lake City is still not exactly easy due to its heavy religious roots and the negative perception from the raid back in ‘05, but this doesn’t stop the Utah ravers from attending V2 shows. These attendees have shown an unconditional amount of support and a lot of them have even become a part of the V2 street team or volunteer for the festivals like Get Freaky, Get Lucky, and Das Energi. In addition to this dedicated promotions team, V2 has its own team of dancers that perform onstage for every show. Lastly, for each show they hire a stage manager named Kevin, and a full-fledged production team as well. The support is undeniable.

But wait…there is yet another side to V2. On top of hosting weekly shows in Salt Lake City and about one festival per season, they also run a full-scale management venture. You might have even heard of some of their clients. The very first artist they signed was the ever so popular, Kill Paris. Their relationship began when V2 found him on Soundcloud and booked him to open for Benny Benassi in 2010, and then eventually Corey (Kill Paris) asked Jeremy if he could step in and help. Jeremy became his full-time manager and is still with Kill Paris to this day. They even help him run his Sexy Electric label, which releases free music. Their more recent signees include Patrick Reza, Alma, Virtu, and SLC natives, Push Play. Jeremy mostly handles management with the help of their executive assistant, Mitch Henderson. Mitch has been with V2 for three years and is an essential piece to their event production and management dynamic.

Considering Brandon and Jeremy also have families (kids and girlfriends), one might wonder how the hell they find a balance for everything. While it’s not an easy task, it is manageable. They have an office downtown SLC and usually work pretty typical business hours so that they can go home and spend time with family at night. Their families are both very involved with their music endeavors – Brandon’s girlfriend is a dancer for and runs the V2 performance team, and Jeremy’s son often comes backstage for V2 events. They both believe it is important to educate their kids on what the scene is about at an early age so that they can experience the beauty of it.

Brandon and Jeremy wish to remain in the electronic music scene and to promote this loving culture that is so unique for as long as they live. While there is definitely a niche music and art scene in SLC, they also welcome people from out of state and plan to work with promoters from nearby states to expand their brand. For example, they have worked closely with Global Dance in Colorado by booking each other’s artists and now this winter they’ll be hosting a Salt Lake City installment of Global’s prestigious NYE festival, Decadence.

V2 is actually the company that really introduced me to electronic music 5-6 years ago because my friends in SLC attended their events and would always tell me about them. About a month ago I was given the opportunity to attend and cover their premiere summer festival, Das Energi. I was outright amazed. The scene in SLC is so unique…it’s a pretty equal mix of old school ravers with younger and more mainstream attendees. Even though there was clearly a range of age groups among the crowd, I only witnessed compassion and open-mindedness between individuals. The setup was also incredibly unique. There were two outdoor stages and one indoors. Indoors was the “Bass Chamber”, where obviously a plethora of bass music was held. The mainstage was outside in the grass and then if you took a little stroll to the salt flats maybe 100 yards away…there was an area called “The Basshive Stage” that greatly resembled Burning Man. The DJs didn’t perform on a stage, there were art installations everywhere (from graffiti walls to a wooden dinosaur burner structure), a mini-stage featuring a straight play, tents where people could sit or lie down, a tree in the middle surrounded by pillows, a big sign that lit up and said “DAS ENERGI”, and a remarkable view of the Rocky Mountains and the Great Salt Lake. You may never find a festival or even a scene quite like this one so I urge you to come out and partake in the V2 experience yourself. 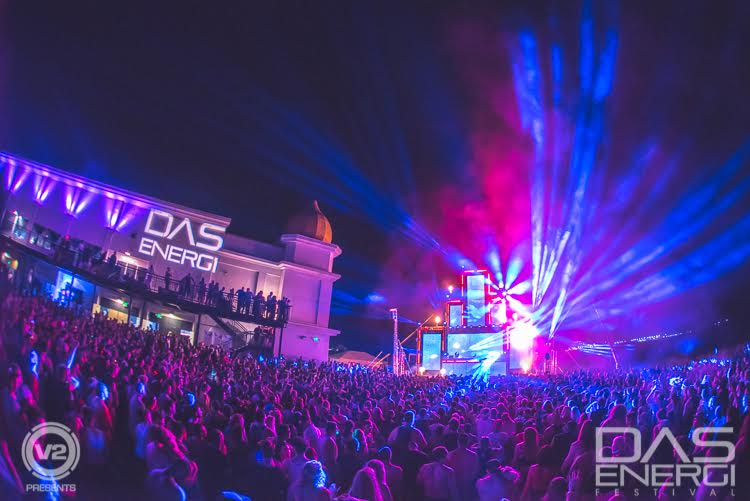 Brandon and Jeremy are constantly reminded of the impact they have made on Salt Lake City’s music scene when they mingle with the crowd at events. Music fans often share their stories about how a V2 show changed or affected their lives in some way. Jeremy said, “I am addicted to the smiles on people’s faces at our events.” This community of believers is what gets them through each day and according to Jeremy, “Music healed me and helped me to connect to my inner-self. I turn to music, family, and friends to get through the dark times.” Despite all of the challenges and heartbreak they have gone through as business owners and in their personal lives, Brandon and Jeremy and the V2 brand are still standing to this day. It’s miraculous, really. But when life gets tough, music and community are what helps them overcome the odds. V2 is a true underdog story. V2 is a beacon of hope for all of those who wish to never back down.