Mad Decent‘s renowned Block Party tour has seen an influx of loyal crowds and performers that has continued to grow in scale ever since the series’ inception in 2008. With stops in many of the country’s major cities and unique, personalized line ups for each, MDBP’s record is almost completely spotless (barring an early cancellation of the Chicago stop in 2012 due to overcapacity).

This year, however, the tour’s final stop in the same city was met with complications. On Saturday morning, I made my first mistake by assuming that the Chicago block party would be taking place somewhere in the actual city. After looking up the location, the Hawthorne Race Course, I realized that the event was being held several miles away from the city proper, in Cicero. I scrambled onto the train for 35 minutes to get downtown, then caught an Uber to take me the additional 25 minutes of the way.

When I arrived, albeit a few sets late, I was met with an overflowing series of lines stemming from the front entrance. While I stood waiting, I could see the large set up at the end of the road. The entire layout of the party was one straight stretch of pavement, starting with the bathrooms, then the food and drink stands, then finally the stage. Leashed drug dogs pulled their owners in and out of the thickly packed lines, often wrapping up the unsuspecting ankles of couples that were standing especially close to one another.

I finally got to the front, and the flustered and bitter security guard patted me down heavily and rifled through my backpack, confiscating my lighter and making me throw out my sealed protein bar that I’d bought to keep me alive during the day. I quickly negotiated with him in order to keep my ballpoint pens. I need those for class, dick. 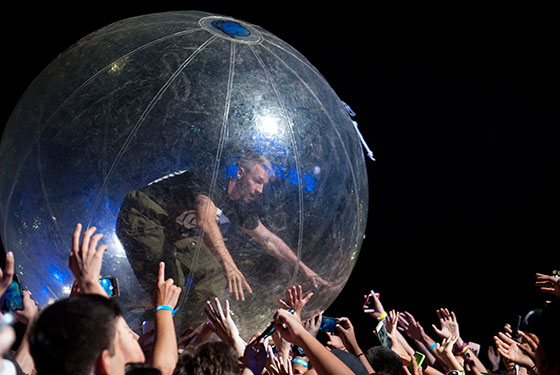 Inside the fences, many attendees congregated around those that had been successful in sneaking in lighters, asking to light their cigarettes while blatantly bothering the owners trying to enjoy the music. Although more distracted, the crowd enjoyed the shows being put on by Party Favor, UZ and Grandtheft with the help of the event’s personalized tall cans of Bud Light. Despite the extreme security measures, we began to loosen up and throw down. Klingande and Martin Solveig performed before Major Lazer closed the night out, the screens and light effects growing more and more powerful as the sun set.

In this writer’s humble opinion, however, the line up for MDBP’s final 2015 stop was severely underwhelming. Even though the artists that did play were extremely well-liked and talented, it seemed like very slim pickings from a gigantic and far more noteworthy list of possible acts (see below). None of the major league Mad Decent all-stars were in attendance, other than Major Lazer, and even the acts native to Chicago like Flosstradamus and Vic Mensa weren’t booked. The combination of the faraway venue, overly strict security, and relatively weak line up in comparison to the rest of the tour made the entire experience feel like something had gone wrong in its planning.

As of yesterday, Diplo took to Twitter to confirm this. After one fan asked him why the Chicago stop was the worst on the tour, he responded as such: 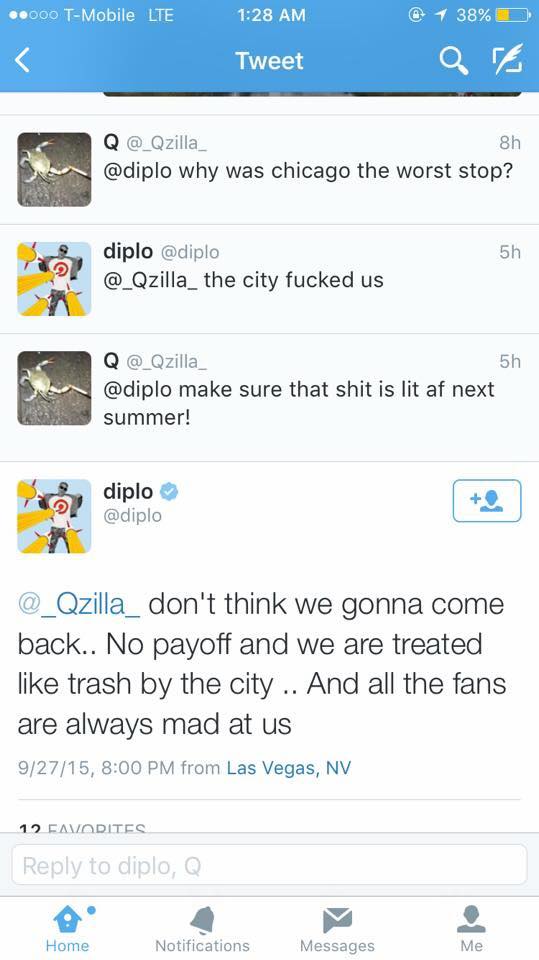 @diplo Does the City of Chicago really not want you to play here or are you not trying hard enough. Cmon, man.

After EDM Chicago posted this tweet, a slew of back and forth arguments with “mad” fans spurred more responses from Diplo. He described the politics of the city, and warned us about the future of events held here. 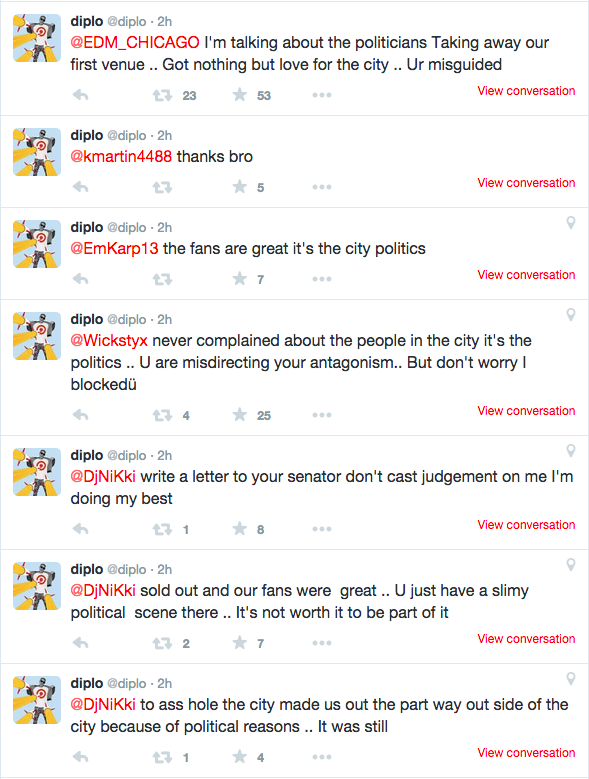 Although the details remain vague, Diplo asserts that it was the city, not Mad Decent, that forced the location of the block party to be held 25 minutes to the southwest.

While we wait for more information to surface, we’re left only with this attendee’s impression of the event. The crowds were energetic and supportive and the music was decent, but it all could have been a lot better. Diplo knows it, the fans know it, and at this point it seems as though the city of Chicago is to blame.