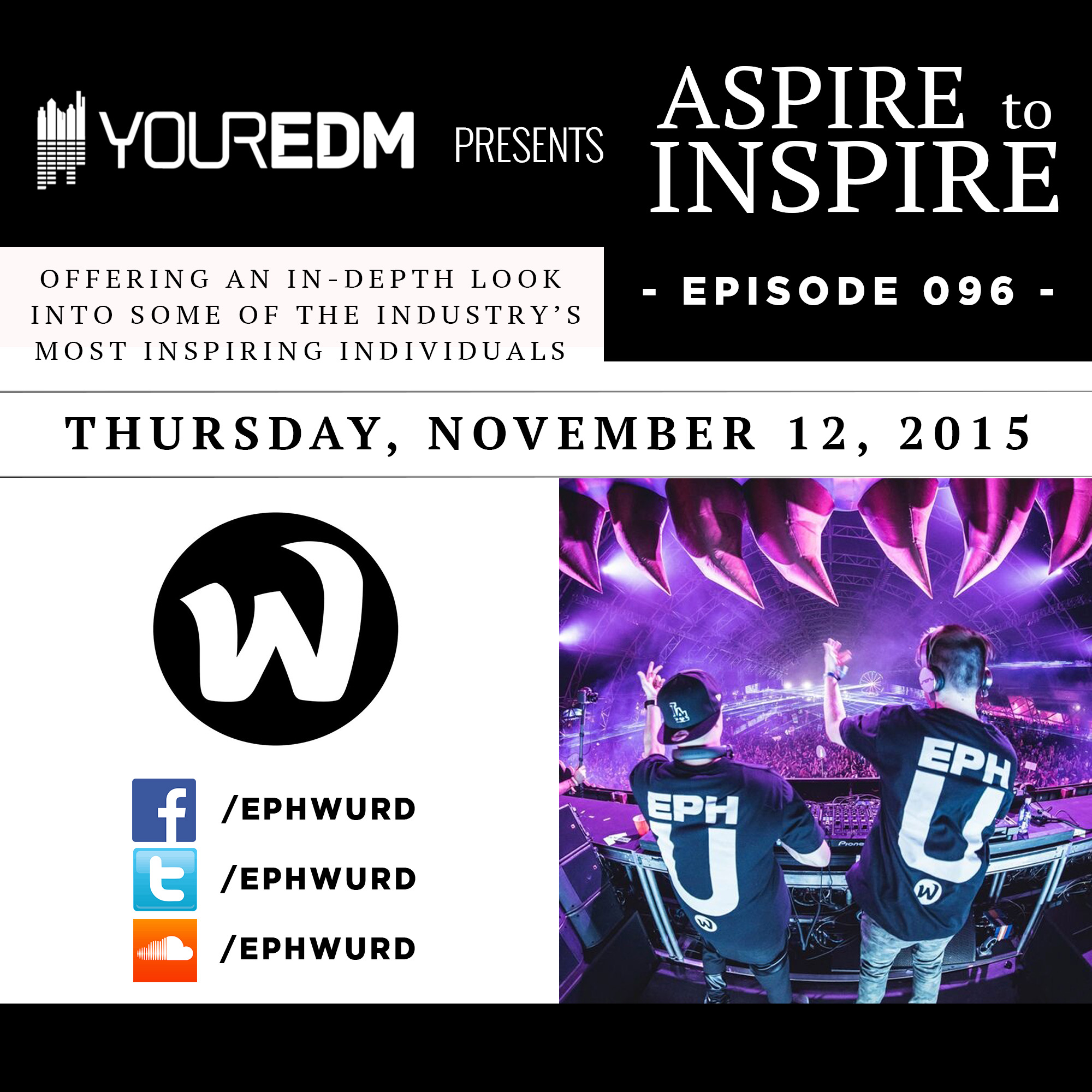 Jordan & Pippen, Shaq & Kobe, Wayne & Garth, Skrillex & Diplo, the list goes on of amazing duos who have changed the game of their respective industries.  We might have to add another dynamic duo to the list before long…that duo is Ephwurd.  Ephwurd is a collaboration between bass music powerhouse Datsik (Troy Beetles) and his good friend and tour manager Basie Hauser (aka Bais Haus).  You might be familiar with their first track – the smash hit collaboration with Jauz, “Rock the Party.”

They have a long-standing partnership and spend long hours together on the road so working on music together seemed like a natural step to take.

Troy: “My childhood dream was to be a pro snowboarder.  I was in competitions when I was young.  Then as it got to be later in high school, I severely injured my knee.  So, they put me in a wheelchair. I’d been making tracks for a long time, but as soon as I injured myself I really started getting inspired by bass music and hip-hop, and that’s kind of what led me to this point now.

Basie: “For me, when I was kid, I didn’t even know what I wanted to do. My dad was a jazz musician in this four-part harmony group called Manhattan Transfer. I always thought it was cool and I loved being immersed in that environment.  Growing up he got me into music theory, but it wasn’t until I got into like Aphex Twin and Square Pusher that I really started liking electronic music.  And then from there, like right out of high school, I started working for Dim Mak…for Steve Aoki. Eventually I tour managed for Steve and met Troy. Troy and I became homies and then he kind of showed me the way.”

Troy came up with the original idea for Ephwurd. The two had already worked together on a few tracks on Datsik’s Let it Burn EP, and he suggested that they dive full on into a collaborative project. With all the time they spend together on the road, they were able to be quite productive.

Troy: “We originally had started it just to write random tunes, and experiment with mostly house music, and kind of just play around with different sounds, and do experiments.  Because we travel together so much it kind of gave us time to really collab a lot and work on a lot of tunes together, and I guess we thought, ‘this is pretty cool, maybe we should actually do something with it.’  And that’s kind of how Ephwurd was born.”

While both Troy and Basie have well-established solo careers they each took different paths to get there.  Everyone dreams of living in the City of Angels, but as Troy, a native of Canada, puts it…all that sunshine can cramp your producing style.  I guess it’s like Vince Vaughn said in Swingers, “puppy dogs and ice cream don’t get the job done.”  Sometimes you need some darkness and gloom to produce…L.A. rarely provides that.

Troy: “Weather here is so constant, you kind of have to force yourself to get in a certain type of mood to write tracks.  Having a dungeon for a studio at my house helps, but in Canada I would wait until it was a really rainy day and put those feelings on paper.  It’s been kind of different in LA trying to write moodier stuff while looking outside and it’s sunny.  That’s been a challenge but I’d say it’s a good challenge… first world problems.”

Although the two have only officially been a duo for a short time, Troy and Basie do have a smash hit single under their collective belts as a duo.  Ephwurd made their debut performance at Escape: Psycho Circus in Southern California on Halloween after this interview took place, however, they were able to reflect on the success of “Rock the Party” and the amazing response they got from fans.

Basie: “I think maybe when “Rock the Party” started blowing up, we never expected that to happen.  We were originally like okay cool, let’s go on and continue doing more stuff.  I wonder how long it was after we wrote it that we started seeing a turnaround?  So we saw a video of Skrillex playing it and it was going off in front of 30,000 kids and we were like, oh shit!  And then it was Tiesto playing it, and Axwell /\ Ingrosso, and then we started looking at that website 1001tracklists and within two weeks it just blew the fuck up.  And then all of a sudden all of these kids are hitting us up…like oh Rock the Party, aaaahhhhhh!!!!”

Despite the success, both Troy and Basie have real lives with real issues that they deal with on a day-to-day basis. Again, it’s not all puppy dogs and ice cream.  For Basie, he’s dealt with family issues while riding the high of the success of Ephwurd (and putting in the hard work).  For Troy, he’s dealt with pressures that so many successful and up-and-coming artists have had to endure.

Basie: “In the past year my dad passed away, and this is right when all this stuff was taking off.  So I was dealing with grieving and writing music and the pressure of making this thing take off.  I think this year’s probably been the hardest of my whole life, considering I lost one of the most important figures for me.  But you survive, and you thrive and move on.

“One thing I’ve kind of noticed, once you’re immersed in this industry, there’s a lot of partying that comes with, and I think it’s knowing your limit and playing within it to a degree.  I always try to have a good time, but I can see how it could be very easy for people to go overboard.  About a month ago a homie of mine passed away, and it’s related to what I’m talking about right now. It’s kind of sad and puts perspective on things and makes you realize that we’re very lucky to be doing what we’re doing right now, and I wouldn’t trade it for the world.”

As Datsik, Troy is one of the most accomplished names in the scene, however, as an artist he admits to encountering struggles along the way.  Sometimes for him taking a break and working on other hobbies gets him in his “chill zone” that he needs to generate fresh ideas.

“I mean the music struggle is real all the time.  It’s something that just doesn’t go away.  Like today, I’ve been in the studio all day and I’ve actually been making a lot of progress, but most of the time I find that if you’re not feeling inspired, it’s not smart to force it because you won’t end up coming up with anything that special.  Inspiration comes in waves so I think by putting time in between projects you allow yourself time to chill and not be stressed out which makes coping with writers block a lot easier. I think as soon as you’re in a chill zone and you get bored of whatever you’re doing as an extracurricular activity, say for example video games, then that’s when you’re like, yo I want to get back in the studio. I have an idea now.  That’s kind of how it works for me anyways.”

Ephwurd as a duo has only been around for a short time, however, the act is guided by two strong-minded individuals who have such a positive outlook on life.  Troy reflected on the joy that the ever-growing EDM scene has brought to so many young people around the globe.

“Music is a good example of bringing people together.  For example, it’s crazy because 10 years ago this whole rave/PLUR scene did not really exist.  So I think these big festivals, kids getting together and connecting in a way where they might have never met before on that level, I think is kind of special. 10-15 years ago there were really only rock concerts, metal concerts and hip-hop and stuff in the mainstream music scene, and those are all completely different worlds from EDM.  I think EDM brings a level of love I guess to all the raver kids.  They like connecting with other people, and I think that in itself is definitely a shot in the right direction.  So, more festivals, that’s what we need!”

Basie even chimed in with his thoughts on the upcoming U.S. presidential election and why he felt Bernie Sanders is the candidate most representative of the EDM scene.

“Finally, on the political subject, I want Bernie Sanders to win for president.  If I have any two cents, no matter how many readers see this, I suggest they go vote for him, because he’s fucking real.  And from what I’ve seen he’s always had the same agenda, which is helping people, bringing the power back to the people, and that’s fucking tight.  It’s kind of what the whole scene we’re in is about anyways.  You have people making music on laptops and starting record labels, so I’m all about building communities that are started by normal fucking people.”

There you have it, the basis for what should be a lasting and impactful musical partnership. Although Ephwurd has no more confirmed appearances for 2015, look for them to make some more noise on the tour circuit in 2016.  Datsik will have several more appearances this year including EDC Brazil and Lights All Night on New Year’s Eve in Dallas.  Basie might make a guest appearance here or there, you never know.  After “Rock the Party” there is no turning back for Ephwurd.

Check out this clip of Ephwurd’s debut performance this past Halloween at Escape: Psycho Circus in San Bernardino, California and throw your W’s up!