The year 2015 was the rebirth of the live dance act. From Porter Robinson’s Worlds Tour to both Disclosure and Gorgon City’s North American tours, and lots lots more, dance music fans have proven that it takes more than just 2 CDJs and a mixer to keep their attention nowadays. While there are acts that stick strictly to a live set, and rarely (if ever) play DJs sets, there are artists who can tow the line perfectly.

There are different types of DJs. Some have a big show but don’t actually do much onstage. I respect the people that actually perform. And that’s why I wanted to do the live show. – Kygo

One of the most noteworthy live acts of the past year was Kygo. In addition to performances at Ultra, Coachella, and Lollapalooza, the Norwegian musician recently sold out the iconic Greek Theatre in Los Angeles, where he brought out John Legend for a cover of his remix of Marvin Gaye’s “Sexual Healing.” While he enjoys DJing, playing the piano has been a life-long passion. It’s evident in the multiple live TV performances for his first original tune – “Firestone” ft. Conrad Sewell.

I’ve been playing piano my whole life; I’ve only been DJing for 2-3 years. When I DJ I do ‘basic’ stuff, but when I perform with a keyboard, I can showcase what I’m really good at. When I’m onstage, I want to give people what they pay for. I want to be a performer and be the best I can be while I’m up there.

Many team members help Kygo achieve those goals. He meets regularly with his visual director who takes his ideas and brings them to life. A separate team builds his stage. Singers from around the world like Conrad and Parson James bring his lyrics to life, and at the center of it all, his manager Myles works round-the-clock to make sure all the pieces fit together.

So excited to announce my debut NYC live show. Been working on this new show for quite some time and can’t wait to show everyone what me and my team have been working on. This is a really exciting time in my career and can’t thank everyone enough for all support they have given me.

When I joined Kygo on a 2-city, 3-show mini tour within a tour this past summer, I witnessed first hand just how much time and effort goes into making every performance (including DJ sets) perfect. Even when switching from Electric Adventure’s all-dance music audience, to the mixed crowd at Lollapalooza, both crowds reacted with the same enthusiasm for his sets.

It’s not frustrating that I can’t bring my live show with me, because I do enjoy DJing. It gives me a chance to play music that’s not mine. The live show is 100% my music. I could play covers, but it’s just not what I want to do.

At his core, Kygo is a musician, regardless of the labels that he’s been given. Even though he made a name for himself in the tropical house world as Thomas Jack’s protégé (but now having taken the throne), the main goal of his upcoming debut album is to break those labels and be seen as so much more than a DJ.

I want to show people that I’m not just a tropical house producer; I’m not just an EDM producer. I’m just a guy who wants to make music. I don’t mind being that guy, but I want fans to listen to the other tracks I make as well and be open minded. If I produce a track that’s not in that genre, I don’t want people to automatically hate it. I’m trying out new stuff.

With a teased collaboration with John Legend and other DJs and producers vying for the chance to work with him, next year’s live shows could put Kygo at the forefront of live musicians continuing to the change the face of dance music world.

This movement will begin with Kygo’s greatest show yet; on January 21, 2016, the Norweigan will play the Barclays Arena in Brooklyn, New York. The first dance music act to play there was Swedish House Mafia, who sold out their “One Last Tour” for three consecutive nights in 2013. Joining him is vocalist Conrad as well as singer Mø, the voice behind Major Lazer’s smash hit “Lean On.” If Kygo’s DJ sets are any indication of what to expect for his live show, then this an event you don’t want to miss.

Tickets go on sale today at 10am, pick yours up here! 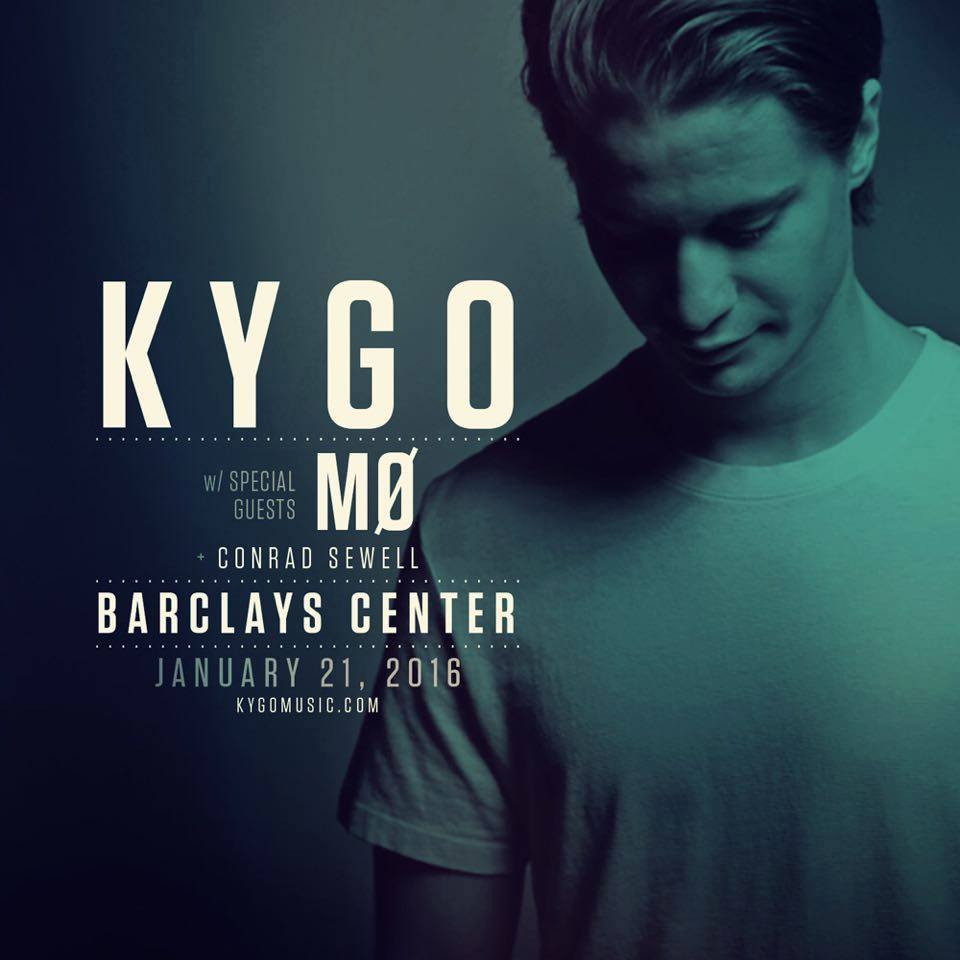