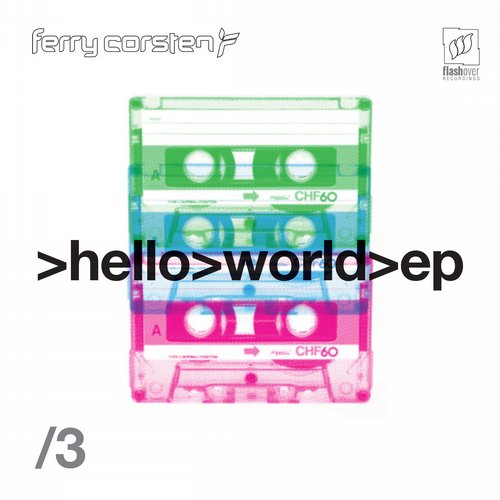 When I interviewed Ferry Corsten back in January, he vowed to make three Hello World EPs before the end of 2015.

I could have released another 15-20 track album, but three EPs keeps the music new and exciting. When you release an album, you get a few months out of it, and then most of it disappears. Plus, I don’t have to sit on tracks that are finished while I work on the rest of the album.

It’s impressive knowing that the same artist who relaunched his euphoric alias Gouryella just a few months ago also created a track like “Hearts Beating Faster,” as the two couldn’t be further away from each other. Regardless of how you feel about Ferry Corsten’s musical journey, there’s no denying that the man knows how to make quality music for everyone to enjoy. Every track on Hello World 03 brings something different to the table. If you’re longing for those trance vibes, don’t worry – the ephemeral “Follow You” or the slightly darker “Voema” reminds us all that Ferry Corsten has not abandoned the genre just because he enjoys creating something different from time to time. There are even chill out and album versions of Hello World 03’s “Not Alone,” for any fans of traditional trance driven by female vocals like Temper Heart’s.

If there’s one thing to take away from this experiment, it’s that Ferry Corsten is a master of all sounds. This year proved to be a renaissance for the Dutch legend, who not only hit a goal he set for himself, but rediscovered a flare for the music that has defined his career for the past two decades. Hello World 03 – the final EP in Ferry’s trilogy – is available now for streaming and download.