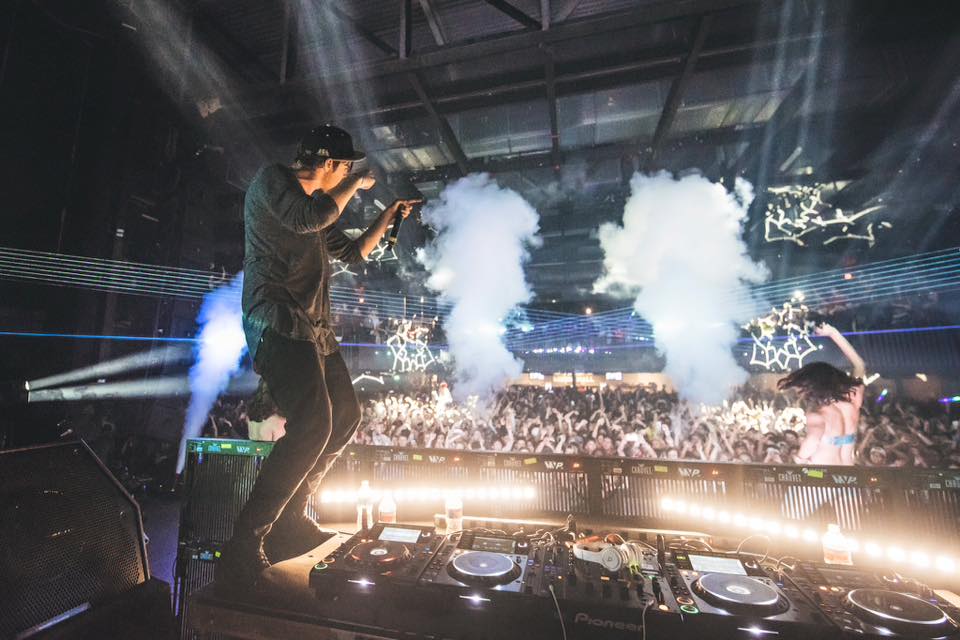 Hard to believe it’s been less than a year since the release of NGHTMRE’s “Street.” Known as Tyler Marenyi when he’s not on stage blasting minds, this LA producer has absolutely destroyed 2015. Now, after “Street” has graced main stages all summer long to the elation of twerklets everywhere, we couldn’t be more hyped for the highly anticipated VIP mix.

Twisting the original into more of the aggressive, metallic clamor that clenched our hearts the first time around, the “Street” VIP mix is tough. The basslines are primed to swindle your soul, and the vigorous successions of cuts on the second breakdown might just stain your pants. Just in time for Christmas, he’s made this track is available as a free download, so stir up some eggnog and get to slumpin’.

We also chance to catch up with the dream fiend at PSG’s Haunted Fest Columbus to hear his thoughts on the past year, how he envisions NGHTMRE’s future, and who he hopes to collab with. Have a listen to the “Street” VIP mix below, and read on for the scoop.

Who, or what, is NGHTMRE?

I want NGHTMRE to be a few things. First off, its music that I love. I try to just focus on making music that I really feel passionate about. I think when you do that, you will see a much more genuine appreciation and reaction from fans.
I also want NGHTMRE to be a brand that represents something more. I want to be an inspiration for people who want to follow their dreams but are scared to take their first steps out into the unknown. That’s why I’ve developed the crystal ball as my logo. When people think of a crystal ball they think of ‘seeing the future’. I want people to realize that every single person in the world has the ability to create their future and create their own happiness. I want NGHTMRE encourage people who might be in a job or part of their life where they are unhappy to take steps towards fulfilling their dreams.

Your Diplo & Friends Guest Mix is filthy, and a great example of a NGHTMRE DJ set. A Diplo & Friends Mix basically gives you a golden ticket; a known gold standard that produces future success. Have any amazing doors been opened since the release of that mix?

Well everything has been moving really quickly since the release of “Street”. Being able to finally go on my own headlining tour has been absolutely amazing and I’m so excited for the future. As for the mix, I’m not sure if it specifically has opened any doors but the feedback from everyone has been incredible! I’ve also got some HUGE collaborations coming up because of it that I can’t mention yet that may have been a result of the mix.

What’s your favorite track to play at the moment?

One of my favorites is “The Hills” (RL Grime Remix). When I first heard the song I really liked it, but when I heard it played out live I knew it was a smash! Whenever I play it in my set it gets such a good reaction and brings such positive energy to the crowd, he really killed it on that one.

What was the last concert you attended for pleasure?

I went to see Porter Robinson live after my set at Moonrise Festival this year. It was absolutely incredible and inspiring. I’ve always looked up to him and seeing that live performance really encouraged me to keep pushing the boundaries for dance music.

Earlier this year, Skrillex dropped “Street,” unreleased at the time, during his Ultra set and you seemed geeked about it. What are some other moments that have stood out for you in your career?

This was definitely one of the best moments of my year. Another one was my set at Lollapalooza. It was my 5th show in 4 days so I was extremely tired, the set got moved back due to weather, and we had no idea how many people would actually show up for my set. Then when the time came, my crowd grew from 500 to 8000 in a matter of minutes. The energy was incredible and it’s a moment I will never forget.

You’ve got an intense tour schedule until the end of the year, have you been writing anything while on the road? What’s your plan once you get a break?

Yeah I’ve actually gotten pretty good at writing music with nothing but my laptop. I didn’t think it would happen but I’ve kind of gotten used to writing music on airplanes, in airports, in my hotel, and wherever I can find a minute to write down my ideas! Whenever I am at home I always schedule studio time too. Working in a nice space like that is always better for creativity than in a busy airport.

If you could make a song with any artist, dead or alive, who would it be?

I think it would be the Red Hot Chili Peppers. Anthony Kiedis, Flea, John Frusciante and Chad Smith. They had such an influence on me and the music I listened to growing up. To work with them would be unreal.