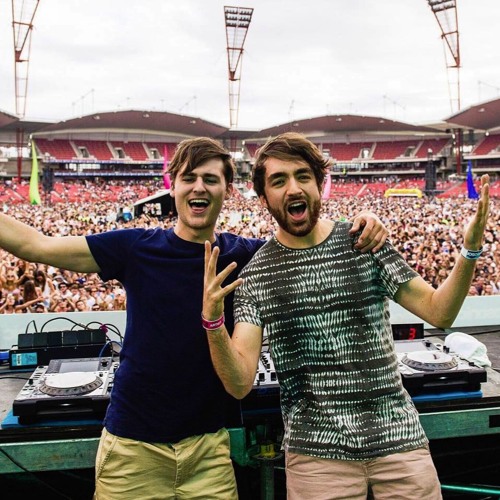 While electronic dance music’s rich heritage calls upon fans of all ages, at its core, the genre celebrates a youthful energy. In addition to the growing accessibility of production programs and sharing platforms, younger generations are now able to dive into our culture like never before, equipping them with tools to create its future.

At only 19-years-old, Robbie Bergin, better known as Throttle, is one such producer bursting into the upper echelons of dance music. Purveyor of all things dirty and disco, Robbie has managed to chase his musical aspirations even while trekking through school; faking an over-active bladder to go check on his viral videos, and taking study breaks from final exams to work on an Earth Wind & Fire remix.

Now, Throttle is about to release “Waiting,” the product of mutual admiration and a longstanding friendship with Oliver Heldens. Incorporating both Heldens’ adored future house and Throttle’s filthy breed of disco, “Waiting” has already been picked up for the theme of a major motion picture, and is paving the sound of house for summer 2016. But this current wave of success hasn’t always been the case for Throttle.

Stumbling into the scene at 12 years old, Robbie began his foray into dance music with a steady diet of harder acts like Basshunter, but it wasn’t long before Australia’s famed OneLove compilations and Ministry of Sound’s renown mixes swooned him with four-on-the-floor.

“Yeah I would sit in my room for hours listening to all these dance music compilations, plus a Nickleback CD here and there. But apparently I’m not allowed to like them anymore…. In this world, there are Nickleback fans, and there are liars!”

Aside from questionable rock decisions, Yung Throttle was left in wonderment regarding how these compilations were put together, and satiated his curiosity by delving into the world of mixing. Soon he was playing house parties and putting together his own mashups, which segued naturally into music production. At the age of only 14, a friend had already started producing, giving Robbie inspiration to go for it, get Ableton, and begin playing around with his own ideas. But experimenting with music quickly progressed into something more. After witnessing the meteoric rise of Madeon, both Robbie and teenage producers around the world found hope in making music work at such a young age. Collaborating with Insan3Lik3, Throttle’s track “Better Than Expected” got signed with the Monstercat stamp of approval, and left him wanting more.

“I remember talking to a guy called Going Quantum, who I didn’t realize was I think actually the head of A&R at Monstercat. I thought he was doing his own thing separately and I was having a bitch to him about how I’d sent this other single to Monstercat and the fucking A&R there wouldn’t get back to me! [laughs] Turns out I was actually talking to the head A&R, and a couple of weeks later they’d signed my first single and things went up very quickly from there.”

A lifetime of experience has been packed into a slim four years since that first Monstercat single. You may have seen Throttle’s Launchpad videos on YouTube, an indispensable effort in ascending to the spotlight. It’s these uploads that got his music into the hands of Avicii, leading to the remix of “You Make Me,” a friendship with Oliver Heldens, landing Future Music Festival Australia, and earned Throttle an in amongst dance music’s elite. Since the release of “Gecko” over 2 years ago, Robbie and Heldens have been friends and fans of each other’s work.

“Oliver and I have been in touch for a couple years now. I can’t remember who hit up who, but “Gecko” was released at the same time as my remix of Avicii’s “You Make Me,” and we both supported Avicii around that time, so we had tons in common!”

We can only imagine long, intimate discussions about VST preferences and what they had for dinner, but it took a minute for the two to collaborate on a track. Contrary to certain producers who bang out another big room shanty in a few hours, Throttle had been working on the “Waiting” concept for about six months. He realized that something was missing, that it needed a certain dose of grittiness to it, and that’s when the concept just felt like the right one for a Heldens collab.

“Earlier this year Oli posted something on Facebook about finally having some free studio time so I was like ‘fuck it, this is happening.’ I sent him the idea that I had – he loved it – and in 24 hours we had a really strong version to work with. We worked back and forward on it for a few months, then finished it in October this year when we were both in LA doing studio time.”

But it wasn’t as easy as collaborating over Splice; Robbie works in Ableton, while Heldens is partial to Fruity Loops. “Sending the stems back and forth was a fucking nightmare,” says Robbie. “I came up with the piano hook over a year ago, and built a really groovy idea around it.” When Oliver began working on “Waiting,” Heldens began adding his signature bass to the drop, and subbed out Throttle’s shakers for more traditional house sounds. Building melodies on keyboard and guitar, the two gradually constructed the arrangement by drawing in notes and embellishments. After nailing the vibe of the drop sections, they each chipped away at different sections, which Robbie describes as quite refreshing. “In some sections I was like, ‘what would I do here if I was Heldens?'” Beyond just splitting the workload just 50/50, having the final product sound like a bona fide collaboration took precedence. When two names are slapped on a track, one style often ends up dwarfing the other, but not with this one. “We’re stoked on the final product, my dirty disco and Oli’s future house really gelled.”

However, the story behind “Waiting’s” final incarnation is juicier than just maniacal file transfers and nailing the house groove. Getting close to the final version, Oliver was making some edits to the track, but was off the grid for a few days for a show at Electric Zoo, and of course, Robbie was teething to hear the latest version. Lo and behold, about five hours after his performance, the internet was buzzing about Oliver Heldens dropping an unreleased ID at EZoo…

“Yep, I heard the latest version from videos people took on their iPhones. [laughs] It’s crazy how it works though. One day you’re making a tune in your bedroom, the next it’s being played at one of the biggest festivals in the U.S. Crazy.”

“I’m focusing on music 100% right now. There’s so much exciting stuff in the works; I’m just enjoying the ride!”

It’s crazy – My manager and I actually sat down a few months ago and put down a set of goals for the next 2-3 years and we’ve already ticked off a few of those: an official Earth Wind & Fire remix and a Beatport number one. Coachella is definitely a massive goal for me, and when the time’s right I’d love to put out a record. But the world isn’t ready for a Throttle album just yet…”