Groove Cruise Miami… the ocean, 2500 friends, and a lot of fake tits.

If there’s any succinct way to describe the four day experience atop the Norwegian Pearl, it’s probably with the three descriptors above. But as you might imagine, that leaves a lot left to the imagination. So what else was Groove Cruise about?

First off, and I’ll admit to hating the word, but there was more PLUR aboard this shit than you could shake a stick at. The cruisers were some of the kindest, least rude, most caring, and out there people that I’ve met in my tenure going to music festivals. Everyone, and I mean everyone, got together to celebrate themed days and nights – it was our own little way of showing solidarity across the ship. No matter where you were from, you knew how to get down.

Second, Groove Cruise was able to make its way down to Jamaica, of all places, this year. In sunny Ocho Rios, cruisers were treated to sets from Le Youth and Bingo Players, as well as complimentary food and drinks of the region: guava rum punch, Jamaican jerk chicken, and more basically rained down in an endless supply. 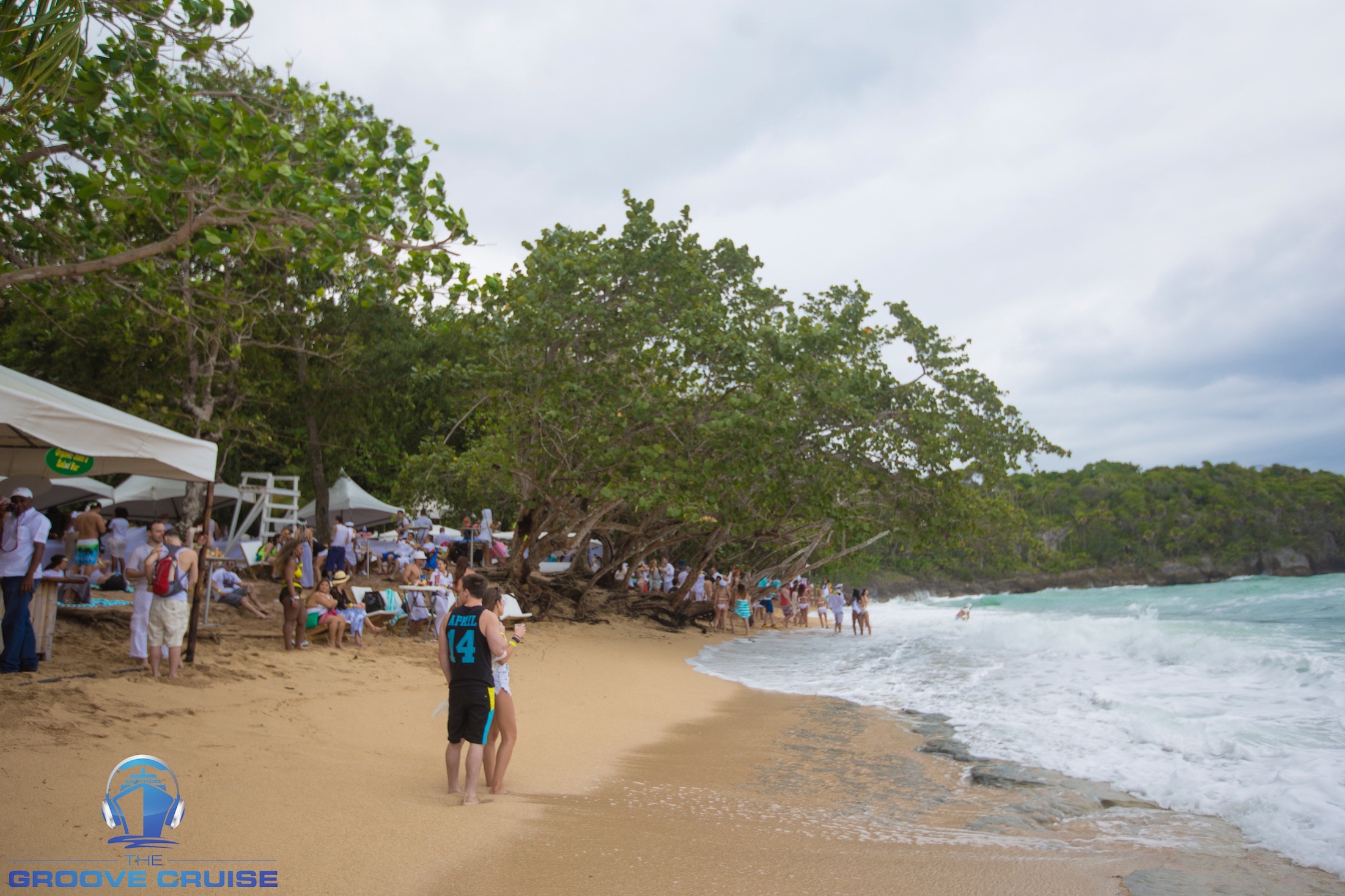 Though this was my first time in Miami for a festival of any kind, this was not my first Groove Cruise. I attended the Los Angeles sailing in October 2015 on the Carnival Inspiration, and the difference between that sailing and Miami this year was like night and day. Between the buffet, the lineup, the production, everything was bigger and better. Better yet, this year featured one of the biggest headliners to date for the Groove Cruise: Dada Life. More on that later… 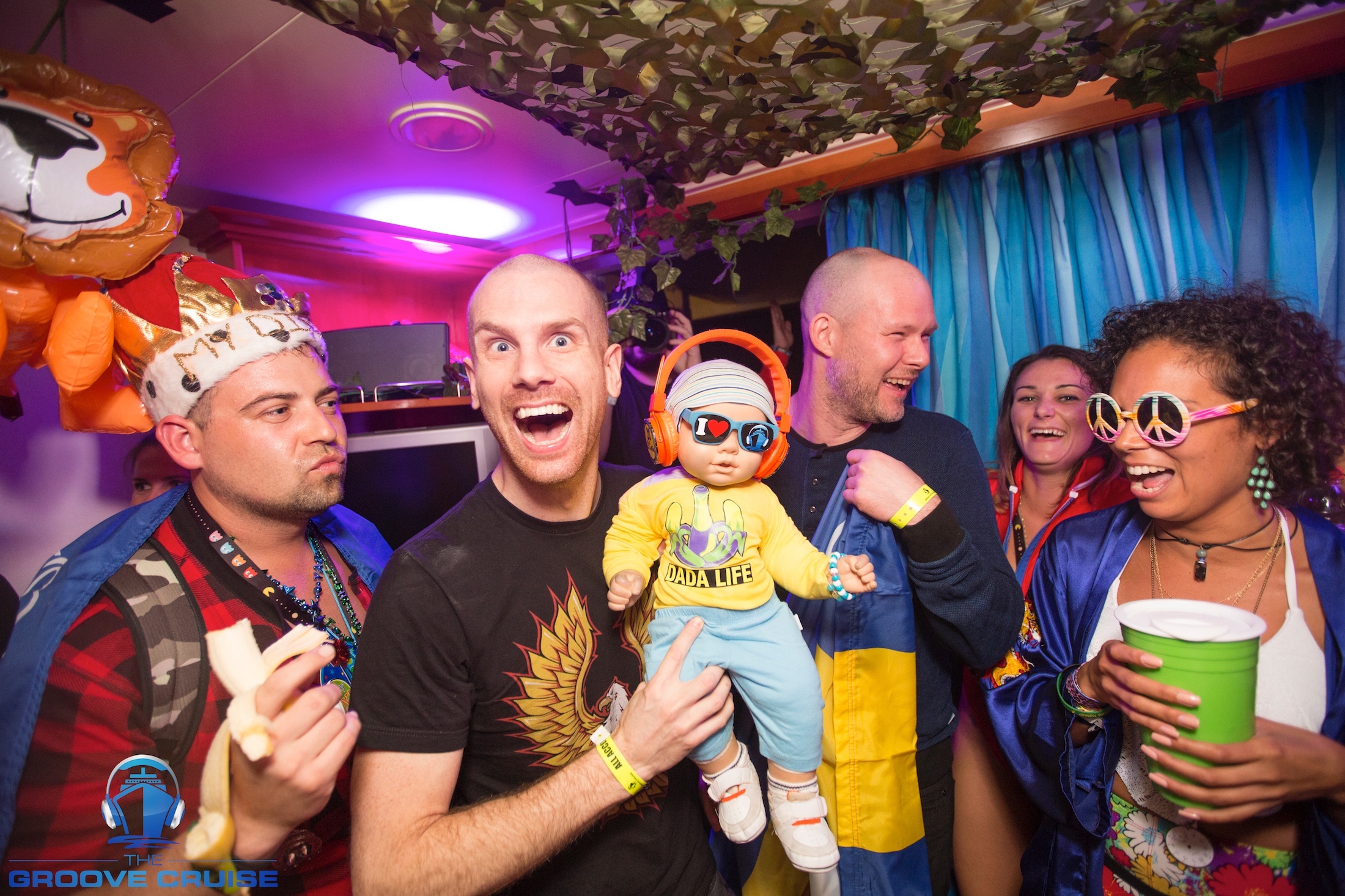 Groove Cruise was cursed by bad weather from the get go this year, delaying embarkation times in Miami, and shutting down the stage on the pool deck multiple times throughout the course of the sailing. The team at Whet Travel was prepared, however, and quickly and efficiently moved sets and times around to accommodate one less stage. The first night saw sets from Dzeko & Torres, New World Sound, Autograf, and a special open to close set from Markus Schulz in the main theater. Many more artists performed the first night, such as Dudenguy, Speaker Of The House, and DSK CHK, but we couldn’t see everyone. 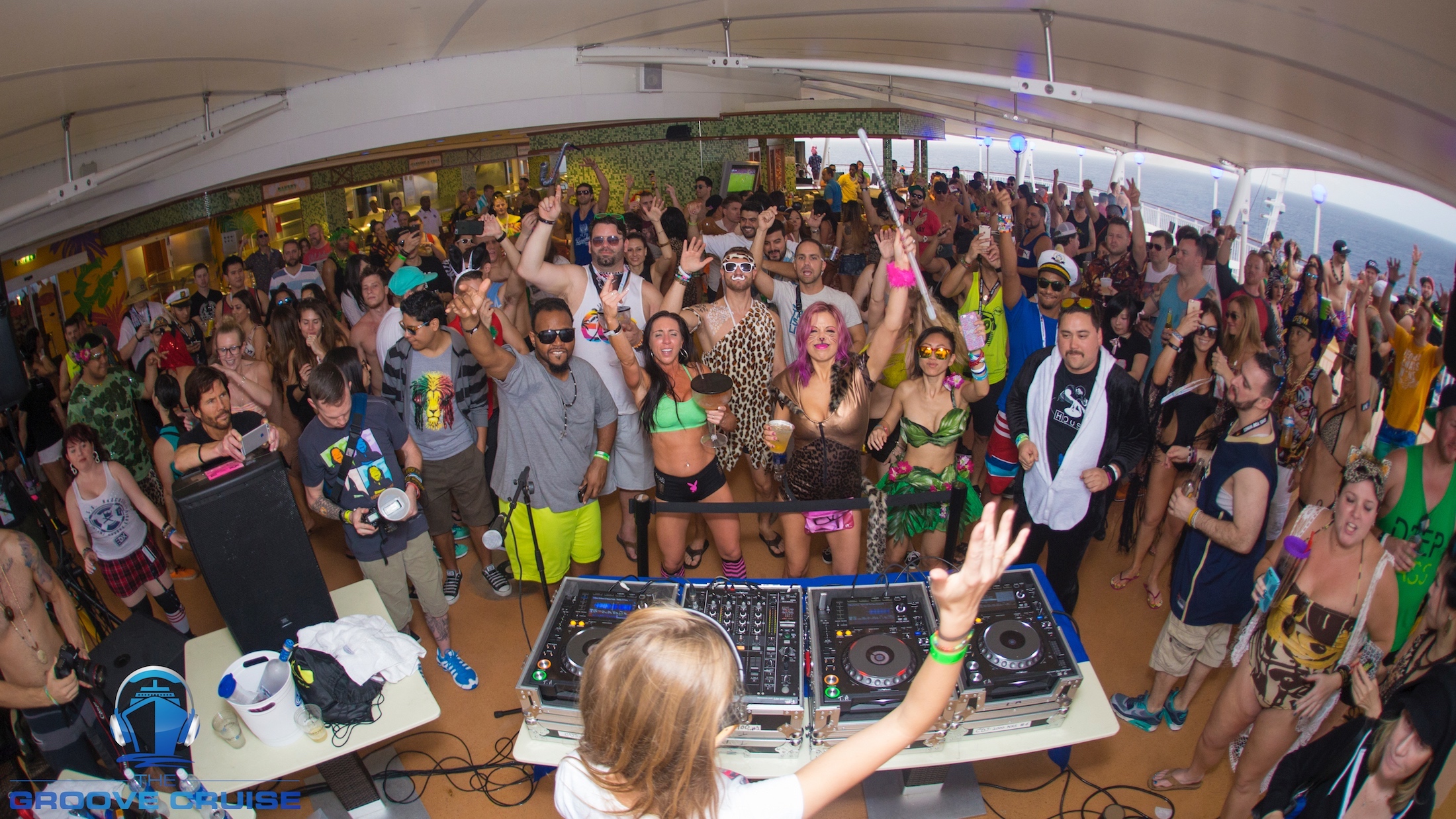 The second day started out warmer and significantly less wet, but again, it began to rain on the high seas later on in the night. A snow storm in the northeast made it impossible for Pierce Fulton to perform on the cruise, unfortunately, but his sets were graciously replaced by Autograf. Sets from Nora En Pure, EDX and Croatia Squad kept things poppin in the Great Outdoors, and New World Sound were the first to deviate from the house mentality on the boat by laying down trap in the Atrium for a good half hour. The second night ended with epic sets from Darude and Dash Berlin. And let me tell you… Darude is actually a phenomenal show live. There’s really nothing like hearing “Sandstorm” dropped unironically.

Yes, that is Darude dropping Sandstorm, and no, I’ve never been more hyped.

The third day had us up bright and early for our trek to Jamaica! While excursion trips were available to those who were daring, my companion and I decided to stick it out with the beach party, featuring Le Youth and Bingo Players.

Le Youth was no stranger to the beach party, as he DJ’d for us in Ensenada on Groove Cruise LA last October. It was nice to see him again in full form and ready to party, though it was a shame that so many people stayed up late the night prior; his crowd was woefully thin. Things started to pick up toward the end of his set though, and everyone was at least a few guava rum punches deep, except for one man who must have had a stack of about a dozen.

Moving back to the ship after Jamaica, we were running between the main pool deck and the Great Outdoors to catch a surprise second set from Markus Schulz, another set from Darude, another set from Chocolate Puma, and a fresh set from Solidisco. However, the night was only just getting started as Dzeko & Torres, DSK CHK, and Dada Life were getting ready to demolish the main theater.

While we were off the boat at the beach, the team at Whet Travel and Dada Life were busy taking over the boat, and converting it to Dada Land. For the ten hours between getting back on the ship and Dada Life’s performance, all TV channels were streaming Dada Land. Posters were everywhere, and you could feel the crackle of energy in the air as everyone waited. To say that Dada Life was the event’s most anticipated headliner would be an understatement.

When time finally came to move to the Theater, there was hardly any room to navigate between the throngs of bananas in the crowd… and the one T-Rex. Dada Life brought out all the stops, including inflatable letters spelling out their name on stage, the classic Champagne showers with all the bananas in the crowd, a gigantic 30 ft inflatable banana, and a pillow fight that covered the front of the room knee-deep in foam. Aside from all of the music going down during their set, seeing Dada Life is truly a unique experience. 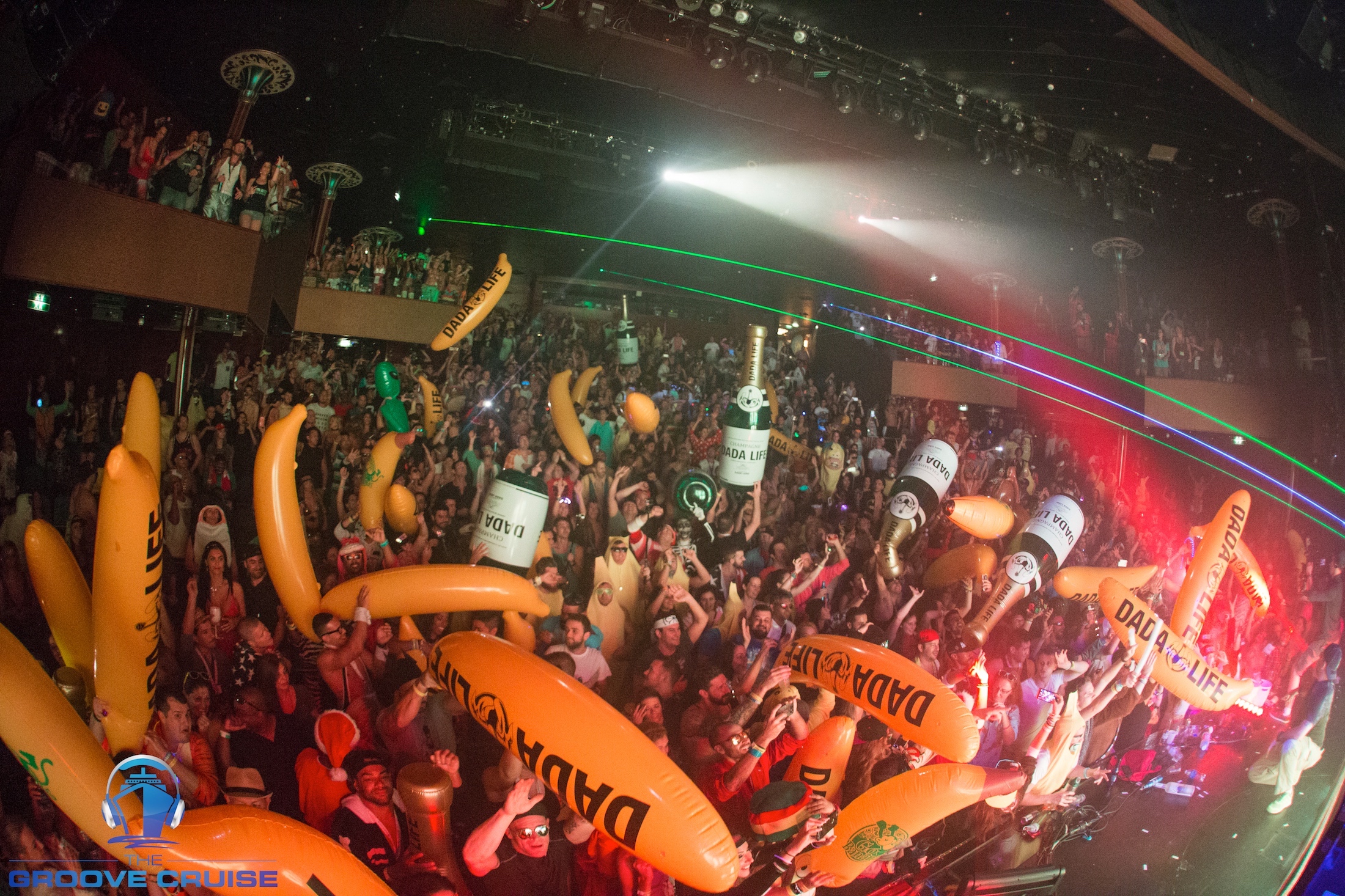 The last day was noticeably more mellow than the previous night. Many people had chosen Sunday night as the night they would stay up through sunrise (as I did), so the music areas were sparse until much later in the night. The day started off in a spectacular fashion with a Team Dada Life vs Team Dash Berlin soccer match at the basketball courts. Darude, EDX and Croatia Squad could be spotted among the teams; although, the true winner of the match was the referee – an attendee who was dressed up as a T-Rex for the majority of the cruise, a costume which ended up affording him nearly unfettered access to the whole ship.

After the match ended (in a tie), we rushed down seven flights to the Markus Schulz album listening party. Markus looked a bit awkward up at the front of the room, watching fans listen to his music with his hands at his sides. I’m sure he’s much more used to having his hands on CDJs and controlling the music himself. We left after not too long to catch Lost Kings tearing up the main pool. High energy music and movements kept what crowd was there moving to the music. 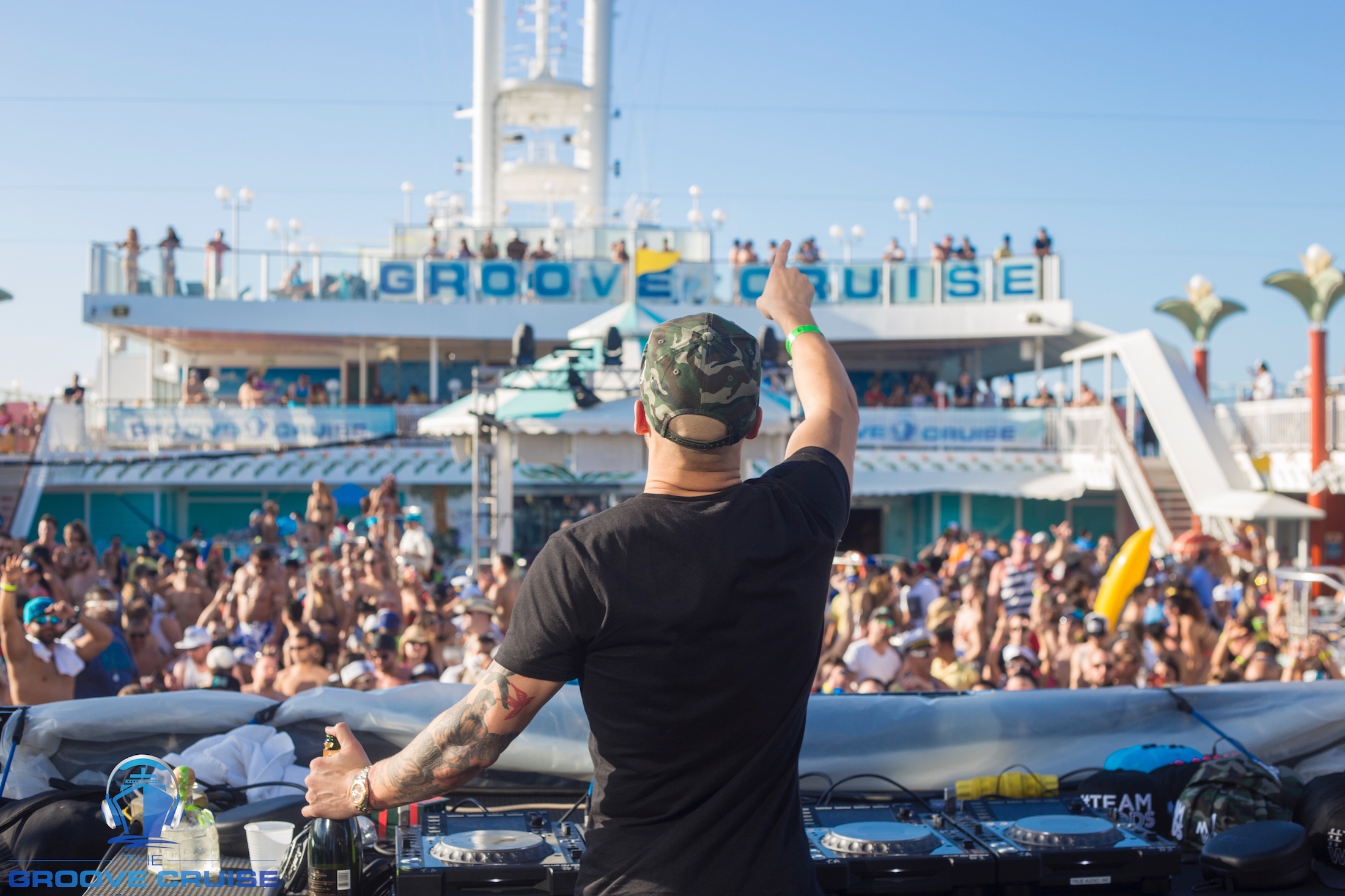 Next up, my personal favorite set of the whole event, Prince Fox. I’m a basshead at heart, and while I enjoy the process of new experiences, I was going a little stir crazy with all of the house music. Prince Fox let me go wild for an hour and a half, dropping Flux Pavilion, O.T. Genasis, RL Grime and plenty of his own originals. If you had seen me at the Great Outdoors for those 90 minutes, you might have sworn that I was drunk. The fact that I was bone sober should serve as a testament to Prince Fox’s ability to appeal to the one basshead needing a release on the boat.

The rest of the night, for me, was rather uneventful. I had finally peaked at 5:30pm on the final day. I felt that was enough. The rest of the night was EDX, Project 46, and a classic hip hop set in the Atrium. I was in my room for that last one, actually, and a friend came running to my room and knocked on the door. As I opened it, she yelled, “Matt! They’re running the trap!” After I was able to stand up again after keeling over from laughing, I walked the two floors up to the Atrium where I saw what must have been a good portion of the boat bouncing to classic hip hop; alas, no trap.

I stayed for as long as I could before my exhaustion got the better of me, and went back to my room and slept it off. 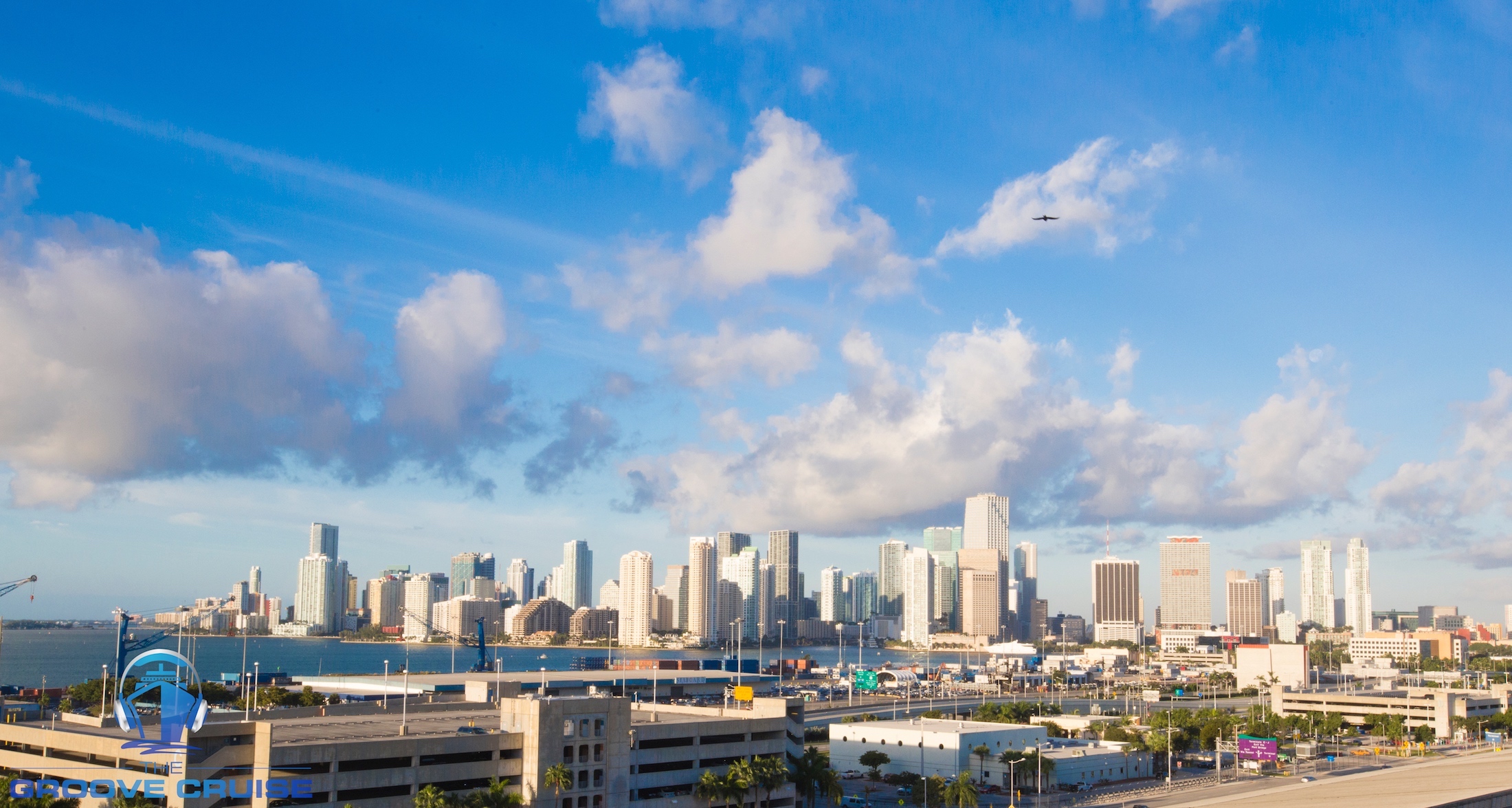 Groove Cruise Miami was, to say the least, a life changing experience. It’s not that my life will forever change in one way or another in any noticeable or significant way; rather, Groove Cruise has shown mean that real communities still exist in electronic music. All you have to do is put them in the middle of an ocean with liquor and trap them there for four days. Not that hard, right?

See you again in Los Angeles for Groove Cruise. Thank you Whet Travel and Norwegian Cruise Lines, and thank you to Rafi, Max, and Jason.

All photos courtesy of @veranmiky

Electric Forest Is Letting Its Attendees Reveal The Lineup

Facebook Wants To Make Carpooling To Concerts Much Easier

Facebook Wants To Make Carpooling To Concerts Much Easier