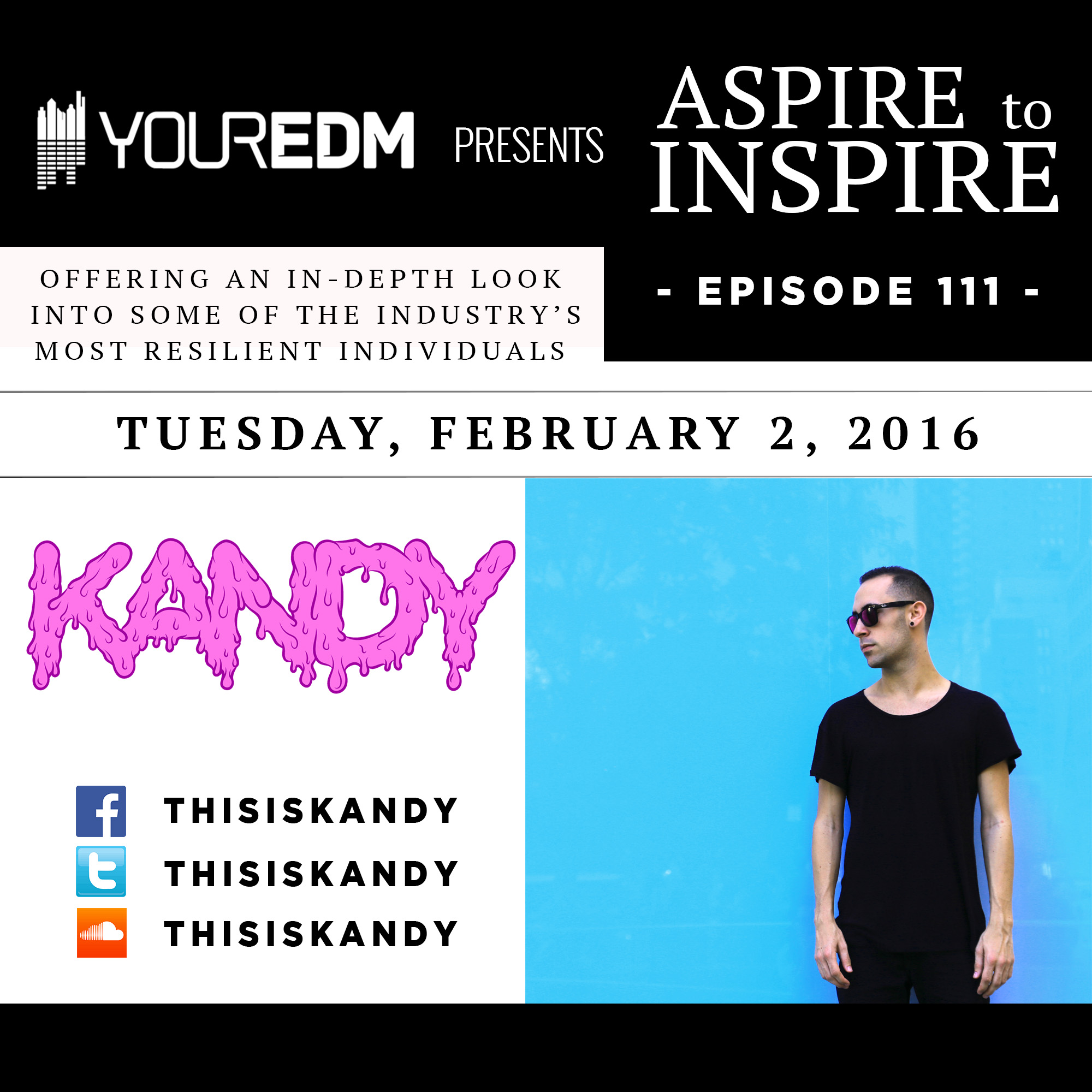 When a person discovers that a career can be built out of something they love, it’s hard to imagine doing anything else. The same can be said for Kevin Schuppel, otherwise known as KANDY, as he began to turn his love of raving into a profession in the dance music industry.

Growing up, Kevin never planned on making music. As many others in the industry, there were other creative interests that grabbed his attention first. Whether it was acting auditions, drawing, or instruments in his middle school days, Kevin was constantly trying to find something that took hold of him. Nothing truly stuck with his interests until he started to work with computers. Referring to himself as a “computer nerd” Kevin shares that after years of trial and error he had finally found something that he truly enjoyed working with.

Kevin was also a raver for years before he decided to start making his own music. He would attend events adorned with kandi bracelets up to his shoulders, which is also how he decided on the artist name KANDY.

As he started to get more serious about making music, the question of whether or not he believed it could become a career weighed on his mind. As much as he loved making music, there was a significant amount of opposition that surrounded him with school, family, and work.

“I never really thought it could be a career. I was always thinking in the back of my head what am I going to do besides this? I really love doing this and I don’t really want to do anything else. At the time I was working at Safety Swim teaching kids how to swim. I was going to school on the side too, but it was never really something that I was interested in. I was always getting kicked out of classes for not showing up because I was always making music. Then I had my family behind me asking what I was going to do, saying it wouldn’t be a career and there wouldn’t be people to support me. They didn’t see it as something that would turn into a career since they didn’t know much about it. I was just so set on it and spending eight hours a day in the studio every day. I lost some friends, some of my closest friends actually because they didn’t really understand what I was doing. I guess it was around two years ago that I started getting a crazy amount of support from the guys that I looked up to. It’s funny because I was always trying to get backstage and take pictures with these guys; the pictures I have from years ago are a lot of the same guys that I have collaborations with now and they really support me. They know my name and it’s crazy to think about sometimes.”

On top of that, Kevin struggled to find places to make music, let alone the time. His family struggled financially for a period of time, which forced him to move around from house to house. Whether he was making music in his Aunt’s basement or an apartment with tenants who may not have necessarily appreciated his craft, Kevin managed to find a way to make it work. It was his first priority.

“If you have the passion and the drive, if you’re in the studio for eight hours a day, if you wake up and can’t think of anything else, you need to go ahead and follow your dream because you’ll be upset if you don’t. For like five or six years now there hasn’t been a day that goes by that I haven’t woken up and thought about making music. It’s always the first thing on my mind in the morning.”

As for Kevin’s inspiration to keep pushing, he often turned to Laidback Luke, who taught him a lot of the music industry morals that he wishes to carry on throughout his own career. One day Kevin tweeted “who wants an EP from me?” and Luke responded saying “me!”, which is how his upcoming EP (coming out February 15th) got signed to Luke’s Ones To Watch Records via Mixmash making everything come full circle.

“In the music industry, Laidback Luke has always been an inspiration for me since the first time I saw him back in 2010. I really liked the way he was interacting with his fans and giving everyone else a chance. He saw that people were in the same shoes that he was in. He was constantly replying to people and constantly giving feedback to up-and-coming producers and no one really does that these days. A lot of them don’t even check their promo emails. That’s definitely something that I want to carry on with me. I’m always trying to check my promo emails and support younger talent because I was once in their shoes too. I was always such a big fan and now I have an official remix for Laidback Luke and GTA‘s song, ‘The Chase’. It’s crazy how things come full circle. I was always tweeting at him and he knew me as this crazy fan on Twitter.”

Although Kevin has his goals set and the path is starting to reveal itself as he receives more support, there are still the small moments that make him take a step back and realize what keeps him going.

“I see the same names come up on social media from six years ago when I first started making music when I had like garbage tracks that I thought were good at the time. People still bring those tracks up to this day and I’m like how the hell do you even remember that? Haha. Like I don’t even remember those tracks, but they do, and it’s really inspiring that some of those people are still with me to this day and still love what I do. It just keeps me going.”

One thing that Kevin would love to see is that same love expanded to the rest of the electronic dance music community.

“Everything has so much hate these days and constant judgment. I’ve seen a little bit of change with it but it’s just constant hate, you know what I mean? I don’t really think about anything other than music and it’s really my substitute for all of that. I’ve seen it go from the whole love and PLUR thing straight to wearing all black, ‘here’s what I listen to and your music sucks’ mentality. A lot of people are into that but I’m really not. I just want to see more love.”

As Kevin continues to make music and tries to bring the love back to the dance music scene, he also tries to keep his sound as diverse as he can. From jungle terror, to bass house, to dubstep, KANDY is blurring the lines from genre to genre a little peace, love, unity, and respect at a time.