by Matthew Meadow
in Featured, For the lulz, Worth Sharing

After hopping off the decks at the Sirius XM party, deadmau5 made his way over to Spotify’s party and experienced some technical difficulties as he got up on stage. Apparently, according to Joel himself on Twitter, Spotify didn’t supply him with an actual mixer when he got up to play.

UPDATE: To clarify, the screenshots in question below are from one Duncan Abdelnour who doesn’t actually work for Spotify. He works for the hotel hosting the party and is a staff member for local promoter Icon Hospitality, which leads us to believe that this wasn’t Spotify’s fault at all, but instead the fault of the venue and those they hired to put on the show.

Also, it turns out that the mau5 might not have had his drivers updated when it comes down to it, and that could have been a contributing factor to not being able to work with the available mixer.

Don Diablo was quick to hop back on stage in deadmau5’s absence to keep the good times rolling, and even trolled him a bit, leading off with a remix of one of deadmau5’s biggest hits while using the same mixer in question.

Hey! Come play our party! Sure guys! Oh you don't bring your own mixer? Gee that's too bad. Thanks @Spotify for following basic instruction.

@Zedd it was pretty bad. Literally showed up and they had nothing wired. Zero. Sorta comedic 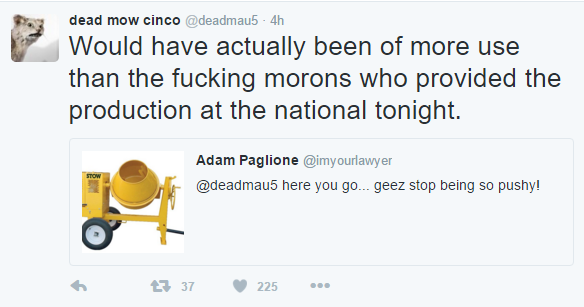 From @DuncanAbdelnour the fucking pro. To my TM… Can't read minds? Try reading your texts. pic.twitter.com/05pj81hTVH

@PierceFulton yeah… But I'm in a hotel room now where I can fuckin actually download the driver for it.