by Jeffrey Yau
in EDM News, Events, Featured, Worth Sharing

Yes, you read that correctly. It looks like California will soon be ‘feelin’ the Bern’ with a free Berniechella party set to be thrown for the common people, while all the A-listers will be busy rubbing shoulders with each other at Coachella.

Though Senator Bernie Sanders may not be the one organizing it, festival organizers have most definitely tried to extrapolate his economic policy and apply it to the two-day festival which will feature live music, beer gardens, food trucks, and exhibitions at no entry cost whatsoever.

The party is set to take place during the second week of Coachella on Thursday, April 21st, and Friday the 22nd at Old Town Coachella and will feature artists such as Alex Ebert, frontman of Edward Sharpe and the Magnetic Zeros, Shepard Fairey, and Zoe Kravitz with an ultimately indie rock/folk-centric lineup.

Best of all, for Bernie Sanders fans at least, the event will also double as a political rally meaning you can both party and show your support for Senator Bernie Sanders at the same time. Per event organizer Tizoc DeAztlan, “It’s a party of people who are in support of a particular candidate.”

Expected turnout is anywhere between 1,500 to 3,000 right now, and while Bernie Sanders has not officially confirmed, or ruled out, an appearance at this point in time, the popular senator may hopefully wind up gracing festival-goers with his presence. 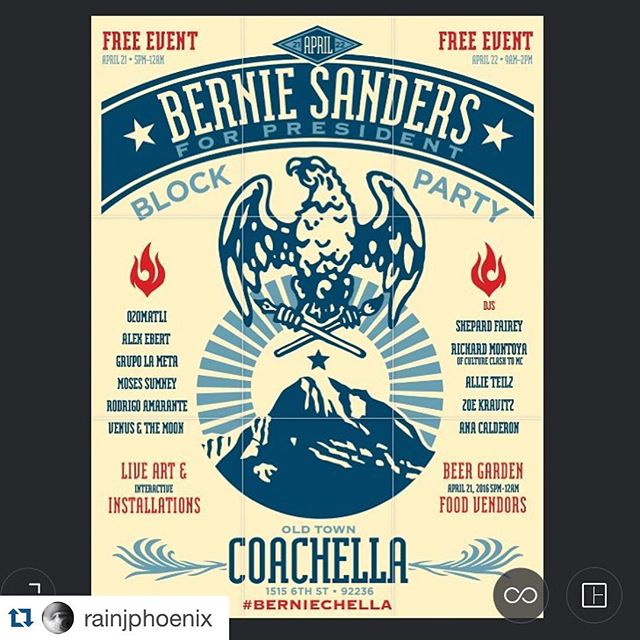 Sasha Has Cancelled His Performance Weekend 1 Of Coachella

Sasha Has Cancelled His Performance Weekend 1 Of Coachella