Late last month, Steve Aoki and Felix Jaehn teamed up with vocalist Adam Lambert to release the official music video for their highly popular, tropical house track, “Can’t Go Home.” The video stars a trained chimpanzee who, along with the lead actress, travels from location to location performing a host of sweet and intimate scenes as part of the song’s overall narrative.

What the producers of the video didn’t anticipate, however, was the ensuing backlash from the North American Primate Sanctuary Alliance. On May 4, NAPSA took to their Facebook page to post a letter written to the three artists regarding the mistreatment of trained chimpanzees.

In the letter, Erika Fleury, NAPSA Program Manager, describes the conditions in which trained chimps are prepared for life in the entertainment industry. After being stripped away from their mothers at far too early of an age, she said, they are trained in behaviors that inhibit their natural way of being. When their time in the business in finished, they are often sold into dangerous and harmful situations where they stay for the remaining 50 years of their life, she continued. The letter was meant primarily to educate those involved about the proper treatment of such animals and why using them in entertainment should be strictly avoided, she said.

So far, none of the three artists or their teams have responded to NAPSA’s letter.

Read the full text below, and scroll further down to see the music video itself. 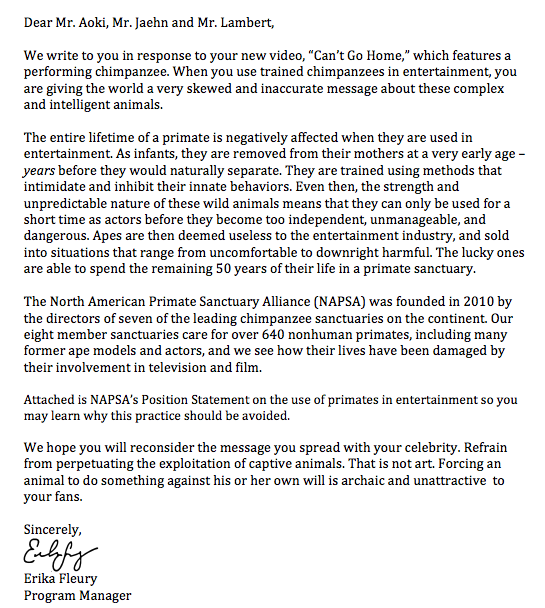