by Matthew Meadow
in EDM News, House, Worth Sharing

Last Friday, Axwell Λ Ingrosso released their long anticipated track “Thinking About You.” While the track was met with a majority of positive impressions, long-time fans know the track better as “Think About It,” a one-time demo from Axwell played once at Monster Massive in 2010.

According to an anonymous user on Facebook, Axwell privately messaged a single fan on Twitter with a link to the original, unfinished and unmastered version of the track. You can listen to that via the link here. 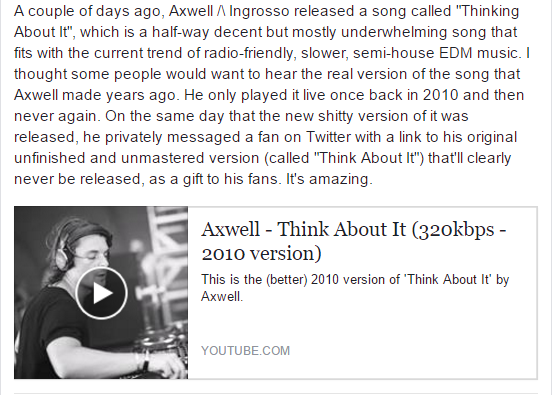 The main difference between the two is the pretty obvious use of Jack Ü-esque vocal rises in the newer version, a clear consequence of moving along with the times. The earlier version just sounds more genuine, as subjective an opinion as that is…

Either way you slice it, Axwell is a brilliant producer, and he’s all the better with Ingrosso by his side. You can listen to the current version below.

Your EDM Mix with Lash – Volume 48

Your EDM Mix with Lash - Volume 48