The elusive B2B between Eric Prydz and deadmau5 is a thing of beauty. What started in 2014 at HARD Day Of The Dead has gone on to be one of dance music’s most anticipated shows, even if it wasn’t the spectacle that the artists originally intended.

Now, in 2016, the two have revived their collaborative efforts, playing a B2B during Miami Music Week and playing consecutive sets at Ultra’s ASOT stage, with the promise of another B2B at Tomorrowland. However, some details regarding their Tomorrowland performance have lead us to believe the B2B might not come to fruition.

Deadmau5 and Eric Prydz are nowhere to be found on the festival’s main stage lineup, and though their own mau5trap Vs Pryda stage has both artists on the billing, they’re not listed as a B2B. 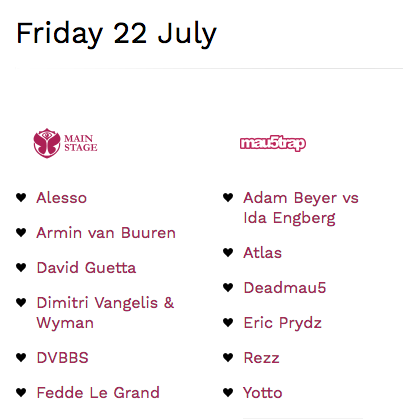 It would make sense to list Eric Prydz B2B deadmau5 as a B2B, seeing as Adam Beyer and Ida Engberg are shown as such, but maybe there’s a larger theme to the stage that they’re not divulging. After all, it is mau5trap Vs Pryda …

We’ve reached out for comment and have not received a response at time of publishing.