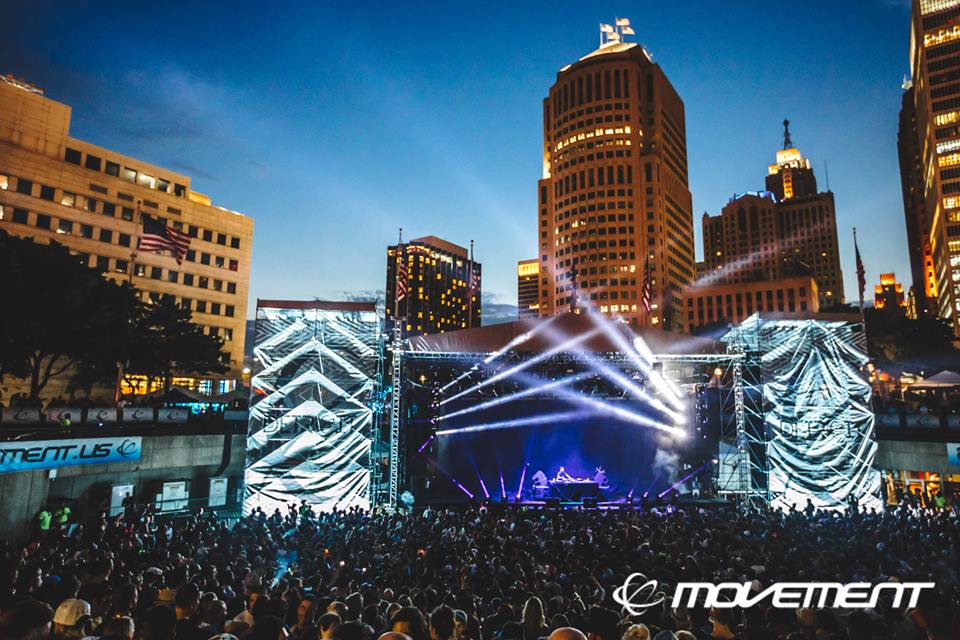 Over the course of its decade-long run, the Detroit-based Movement Electronic Music Festival has gone by a few different names. First, it was simply known as the Detroit Electronic Music Festival, then Movement, then Fuse-In, and now its current name. Despite its revolving door of titles, the festival continually succeeds in bringing the best of electronic music to the city that birthed its motherly subgenre: techno.

This year marked the 10-year celebration of Movement, and promoter Paxahau went all out to curate a stacked lineup, deliver enhanced production, and assemble an assortment of after parties and related events. While the techno offerings were a bit lighter than in previous years, Movement made up for it in big bookings. Among them were the legendary Kraftwerk, the electronic band hailed for popularizing electronic music as a whole. Their set drew the biggest crowd of the weekend to the Movement Main Stage, with hardcore fans and curious attendees alike crowding around the stage’s stands to catch a glimpse of their 3-D production.

Artists as universally loved as Maceo Plex to rising stars like The Black Madonna delivered exceptional sets, often blurring the lines between techno, house, disco, ambient, you name it. No matter who was performing, the chance of catching a disappointing set was pretty low with the talent involved. Curated stages like the Acid Stage honed in on specific sounds unfamiliar to many festival-goers, and Detroit hometown heroes like Stacey Pullen, Carl Craig, and Kevin Saunderson came equipped with proverbial “big guns” for their sets.

Production, while not as elaborate here as at festivals like EDC Vegas and Ultra, still brought some well-designed lighting and sound. It’s rare to catch a large-scale festival hosting almost purely underground sounds in the States, and for Movement to go to the lengths it did to encapsulate quality production is really commendable. Stages like the Red Bull Music Academy and Beatport showcased memorable visual design, and every stage emitted bass, hi-hats, and vocal samples immaculately. Some sound bleed affected quieter moments during some sets (noticeably during the Juan Atkins and Moritz von Oswald collaborative performance Borderland), but not enough to sully the overall experience.

However, the Underground Stage continues to plague the festival as its distinct sore thumb. The idea is great in concept – a literal underground stage that emulates the look and feel of a club. But, the stage’s limited parameters make the music sound muted, and the overbearing heat creates a very dangerous environment. Sets from Nina Kraviz, Boys Noize, and the various artists during the OWSLA takeover couldn’t be enjoyed to their fullest due to the stage’s wonky and borderline threatening layout. Unfortunately, these problems seem to be the nature of the beast, but we hope Paxahau addresses these concerns for future festivals.

This year, Movement really came into its own as a tightly and smoothly run machine. Last year, a flurry of complaints stemmed from long wait times for entry and will call. Unlike many festivals that let its problems seep into its reputation before addressing them, Movement took the bull by the horns. This year there were virtually no wait times (even during peak hours), and a wristband system prevented backed-up will call lines. So many festivals fail to improve their faults year after year, but we applaud Movement for making the effort to assuage many fans’ complaints from 2015’s event.

Beyond the festival itself, pre-parties, after parties, and even concurrent parties flooded Detroit with label showcases, sunset and sunrise sets, and marathon festivities. On the Friday before the festival kicked off, Matthew Dear returned to his hometown to perform a staggering open-to-close set at Leland City Club, full of unreleased material from his more techno Audion alias.

Saturday’s events drew plenty of Movement attendees looking to party after the festival. At Populux, Maceo Plex hosted a party dedicated to his Ellum record label, even going b2b with a label rising star by the name of Maars of the group Odd Parents. Over at Leland City Club, the touring Flying Circus party hosted by Paradigm Presents brought a rare U.S. club appearance from Berghain resident Len Faki among other great sets and psychedelic production. Late into the morning, Tangent Gallery hosted a celebration for German record label and club Tresor, honoring its 25-year legacy with sets from Berlin legend Moritz von Oswald, Detroit local Terrence Dixon, and more.

On Sunday, the parties continued to bring huge acts to smaller settings. Adam Beyer brought his Drumcode label party to Detroit for the very first time, going b2b with Joseph Capriati for an extended set at The Annex. Over at The Works, the Interface party once again hosted hours of exceptional underground and industrial techno, with live sets from Cassegrain and Headless Horseman and relentless DJ sets from Andrei Morant, Adam X, and Perc. Monday closed out the weekend proper with a rare label party from Nina Kraviz‘s трип label at Populux. Detroit locals like Terrence Dixon and K-Hand gave their souls to their sets, and трип rising star Bjarki played a monstrous live set before Kraviz herself closed the weekend with a hour of non-stop anthems and underground selections.

In a way, the electronic music underground scene in America and Detroit as a city draw parallels for their rise, fall, and resurrection. Both experienced lush beginnings, setting the standard for future imitators and competitors. Then, the two declined and many loyal observers wondered if they could ever reclaim their former glory. Now in 2016, both have experienced renaissances that may even surpass their original halcyon days. It’s quite a beautiful sight to witness, and we can definitively say Movement and Detroit are here to stay for a very long time.