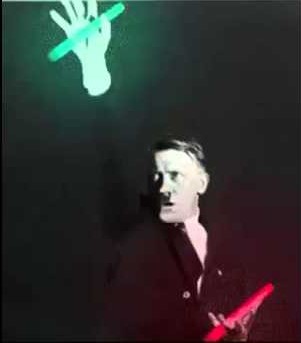 With so much fantastic and exciting music being released these days, alongside enormous festival displays and maturing trends within the community, it’s often hard to remember that dark and more sinister sides of dance music still exist. No, we’re not talking about infamous nightclub Berghain or even the dangerous drug culture that sometimes permeates the scene. This one is much worse.

“War trance:” a sensible mix of heavy techno, drum and bass and jungle rhythms and old footage of Nazis and Adolf Hitler during WWII. In a recent report published by The Daily Beast, one war trance DJ is focused upon exploring the murky depths of this strange and horrifying genre of music.

DJ Ghost of the Reich, otherwise known as Edward Perkowski Jr., was arrested on Long Island in June after police seized weapons, bomb-making instructions, drugs and Nazi propaganda from his home. Before then and for at least the last seven years, however, DJ GoR has acted as a pioneer in the war trance genre, creating his own perplexing strand of music video mashups.

The clips employ a combination of fleeting war footage, closeups of Hitler and followers, static text regarding philosophies on war, Aryans and the Jewish population, and other relevant material. Speeches and battle sounds are played underneath pounding, electronic beats during many of DJ GoR’s videos.

The work of DJ GoR is aligned with others in the field, such as DJ Nazi Scum, DJ Adolf, DJ White Pride and more.

Robert Futrell, professor of sociology at the University of Las Vegas, said that the mixture of dance music and Nazi propaganda can “do things that shade into a familiar pop culture form, which creates confusion and curiosity.”

He believes the efforts of such DJs are meant as recruiting tools to expand the population of white supremacists through a familiar medium. “All they’re looking for in a strategic sense is for you take one more step. It’s like saying ‘Hey, white people, if you could just understand what we’re about, you’ll be enlightened and want to become one too.’ Music is a tool to draw in new recruits.”

Check below for another of DJ GoR’s videos. Of course, discretion is heavily advised.