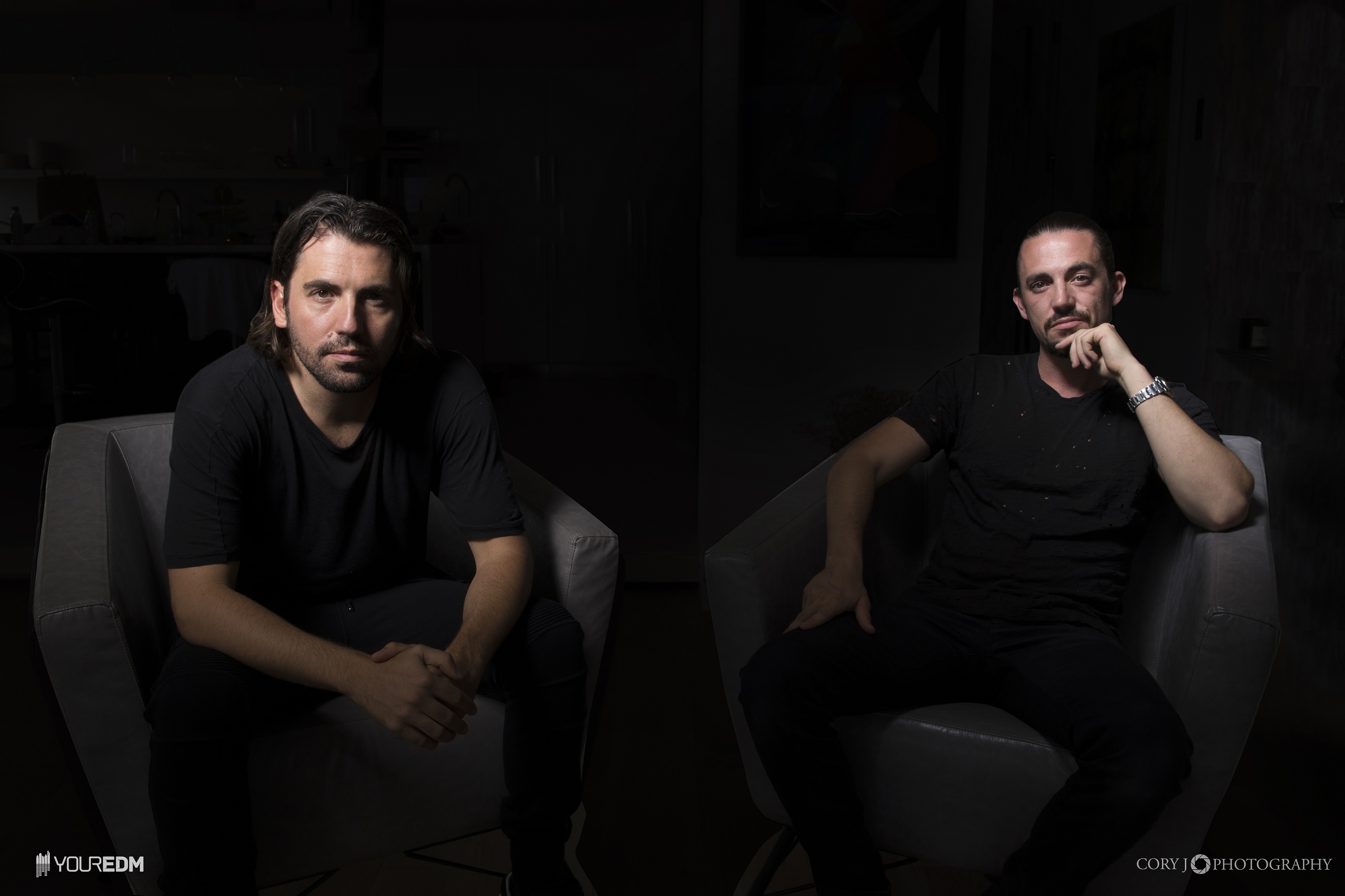 It’s another one of those things people say, like artists don’t play live…

Mike: [in a far off voice] It’s pre-recorded! Honestly I think it would be much harder to try and mimic every little movement, every little effect… “Ah fuck, I forgot one! God damn it!” [laughs] You know? Who does that?

Dimitri: Even now, even if there’s pyro or effects, there’s no excuse because there is a time code system. All the pyro, all the vocals, everything can be done in real time. So that’s the beauty of technology now, so when I read those comments like, “Your show’s pre-recorded because the vocals are right on time.” It’s like, “Hey… it’s 2016. We have time code.”

Dimitri: Anyway, sometimes it’s funny to read, sometimes it’s frustrating. But I can still remember, I don’t want to be a hypocrite. Honestly, I remember being 16 or 17 years old, being in a club, and the DJ’s playing, and I still think standing in the corner, “I can play better than that.” But that was years ago, there was no internet, I’d be talking to 10 friends and it would stop there. Now there’s internet and people can spread their message everywhere. But the internet is probably the biggest reason for the success of all the DJs today.

Mike: Especially Facebook, because when I first started using it, I harassed every DJ and spoke with them on a daily basis. Back then, people didn’t really do that. And now, we get a million of those messages every day. It’s also impossible to answer those – but back then, maybe I was one of two messages they got that day, you know?

Dimitri: That’s the thing with haters, you read those, but they’re really one or two percent max, and the rest are all good messages. So after time, somehow they don’t stick by you as much. It’s a task for most artists to get hard skin.

Mike: I remember speaking to David Guetta about it, and he kind of laughed in my face. I noticed he had a lot of haters and he was just like, “What the hell are you talking about?”

Dimitri: He’s always been very kind about it, saying, “You don’t have to worry about it.”

Mike: It didn’t seem like he gave a single fuck about it.

Dimitri: Honestly, everybody cared but…

Mike: Now, I can honestly read it and it doesn’t do anything. I think it makes you harder.

Dimitri: I guess most of the bigger artists realize that you can’t have a million fans without a couple of people not liking you, I suppose.

Yep. We’re aware of that. [laughs]

Dimitri: And, let’s say, it’s easier to get attention with a negative message than with a positive one.

The next controversy in your career after the ghost producer bullshit was the DJ Mag Top 100. It sort of came out that people were going around in Belgium at Tomorrowland with iPads, asking people to vote for you… As far as that story goes, is there anything you can tell me about the people with the iPads, whether they were hired or if it contributed to your rank?

Dimitri: The thing is, we have been running — for example, at Tomorrowland, there was the campaign for our shows at the end of the year. Then once you’ve signed up for your tickets on the iPads, we give people the opportunity to vote. But nobody ever made anybody vote for us. You can vote for anyone, but of course we ask you to vote for us. We saw the comments saying we gave people free iPads…

Mike: Yeah, we gave every single fucker an iPad, like really??

Dimitri: That’s how far the story went! But realistically, in Belgium, where people had the opportunity to vote, we sold 60,000 tickets and Tomorrowland is our home ground. So in general, if somebody in Belgium votes, mostly likely they’re going to vote for us. So that’s one of the big reasons I think why we got that #1.

Mike: But also, while everyone was focused on America the past few years, we had the focus on Mexico, Brazil, India… we toured in all those other places on a pretty consistent basis and we had huge fanbases in those countries.

Dimitri: But it’s true, we did a big campaign, and everyone who campaigns uses certain marketing materials. But nothing we did in our campaign was against the rules of DJ Mag. So other people also use iPads–

Mike: This year, I bet there will be many more artists using iPads.

Dimitri: And other people used other marketing campaigns — but I don’t like name calling, other people do, but other people have websites giving points for pushing the message for voting for DJ Mag. Or you know, what’s the difference in spending $20,000 or $50,000 for promoting on Facebook, versus just saying, “Hey, if you want to vote, you can vote here,” you just facilitate the process. At a certain point, some DJs care about DJ Mag and they campaign and they put money in the campaign and they push the message. Other people, they don’t and they look down on it. The only thing is, I can respect more that certain artists who don’t really go for DJ Mag say, “Pfft, I don’t take part in the circus and it’s all bullshit.” But other artists who do campaign a lot, and probably more than us, then get sore that we used a different technique and that they lose the advantage. At that point, I’m not really cool with that.

Mike: But we don’t take part in the name calling game, never have and never will.

Dimitri: I mean, when we got called out, we could have called back. We had other opportunities to call back about other stuff, but I think if you go through our Twitter timeline from the very beginning, I don’t think we’ve ever participated in online fights. I don’t think we’ve ever responded to anyone attacking us, either. If I feel that I have a problem with you, I will call you, I will email you, I will talk to you. But I don’t think it’s a thing that should always be spread over the internet. But again, that’s our personal opinion. Everyone is free to do whatever they want.

So how did you feel when you were voted #1? Pride? Accomplishment?

Dimitri: For us, it’s the biggest recognition —

Mike: I remember celebrating being number one-hundred-and-something like, “Yeahhhhhhh!”

Dimitri: For us, we never expected that we could make #1; and to be honest, to close out the thing about the iPads, people will only vote for who they want to vote for. We didn’t have a team of people with handguns pointing at people’s heads saying, “Vote for Dimitri Vegas & Like Mike.” So the people who voted for us wanted to vote for us. Would you vote for somebody if you didn’t want to vote for him?

Dimitri: [motions “well there you go”] And the rules are very clear – no one is to give any presents, so no one was given any incentive to vote for us. It was just, “Here’s an iPad, would you like to vote for Dimitri Vegas & Like Mike? Yes or no?”

Mike: No sexy girls or anything either, it was girls in white fuckin’ T-shirts. I’ve seen things like “Oh they had naked girls on the beach in Ibiza going around with iPads.” Like what?

Dimitri: See that’s the thing how small stories get blown out of proportion. The biggest one is that we gave everyone–

Mike: — an iPad. Yeah, that goes around South America because they don’t understand all the articles, so that’s what they make out of it, you know? “Ah, everybody got iPads!”

Dimitri: But the whole controversy about the iPads did sort of make me feel bad.

Mike: Yeah, it really brought down that whole happy moment of our careers.

Dimitri: Especially the corner that it came from was a bit surprising for us, the way that everyone got pulled into different directions. But it is what it is, life goes on.

Well, I think that about covers it guys… unless you have anything left that you want to touch on?

Mike: VOTE FOR US!