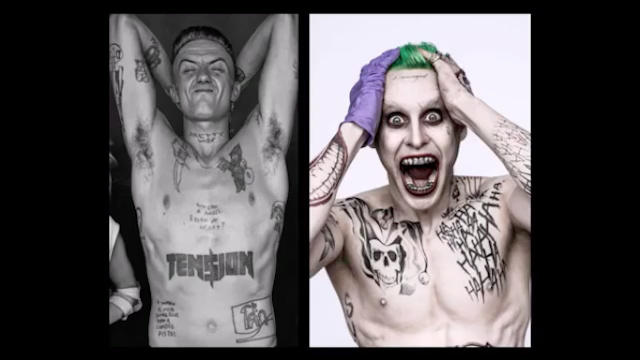 Now that Suicide Squad is out and the dust has settled, the once-craven community that couldn’t contain themselves from its release have taken to social media and review sites to condemn their phenomenal disappointment with the final result. With an over-advertised presence by the Joker, a flurry of overlapping and unnecessary storylines and a measly 26% critic score on Rotten Tomatoes, it’s safe to say that the comic community will have to wait a while longer before being satisfied with a less chaotic rendition of the anti-hero series.

While most of us moviegoers hang our heads, however, fists are being raised over the film’s artistic aesthetic by one very interesting source. Die Antwoord’s Yolandi Visser, half of the acclaimed South African duo, took to her Instagram account early Wednesday morning to call out Suicide Squad director David Ayer for “jocking their style.” In a lengthy text post, she describes Ayer as stealing the pair’s signature black & white wall drawings, Ninja’s trench coat and tattoos, her multiple wristwatch style and more.

She said that Ayer had initially contacted Die Antwoord about the film, “pretending to be down,” but then talked them up while on set without responding to their eventual concerns. Ayer even invited them to the film’s premiere, Yolandi said, where Ninja was forced to sit and be nice because of his child being with him.

She calls Ayer a “fake fuck,” and even compares him to Kanye before telling him to come down to their studios.

Check out the post below, and watch the comparison video Yolandi put together of the film’s similarities to Die Antwoord’s style.

yes David Ayer u jockin our style. callin ninja up before your movie came our pretendin 2b down, so it looks OK when u bite our black & white graf style & our opening sequence to umshiniwam & an all da lil tiny details u nibbeld dat other people wont see but we notice. Cara & Jared told us how much u were talkin abt us on set but u never asked our permision to rip us off. An when ninja texted u sayin wassup wif dat u said nothin like a scared lil bitch. U were jus flauntin our names pretendin to b down. u aint down an u never will b. but before we knew da extent of ur two face nature – u invited us to ur movie premiere(which i didnt wanna go to) but ninja went , tinkin ur solid guy an mayb there was jus a lil "misunderstandin". Den poor ninja had to sit thru dat hole bullshit movie. An u even got da nerve to say wassup to him smilin – an ninja has to b nice cus he is there wif his kid. But we all tink u wack. U shud start a crew called:,"im a fake fuck" ask kanye if he wants to join u. Cum show ur pretty face at my studios. U know Muggs & u know where da Soul Assasin Studios at. we watin for u. @djmuggs_the_black_goat_ @zef_alien @boojie_baby_ @ragingzefboner @_dark_force_ @dejanvisser @djhitekisgod @jipsi518