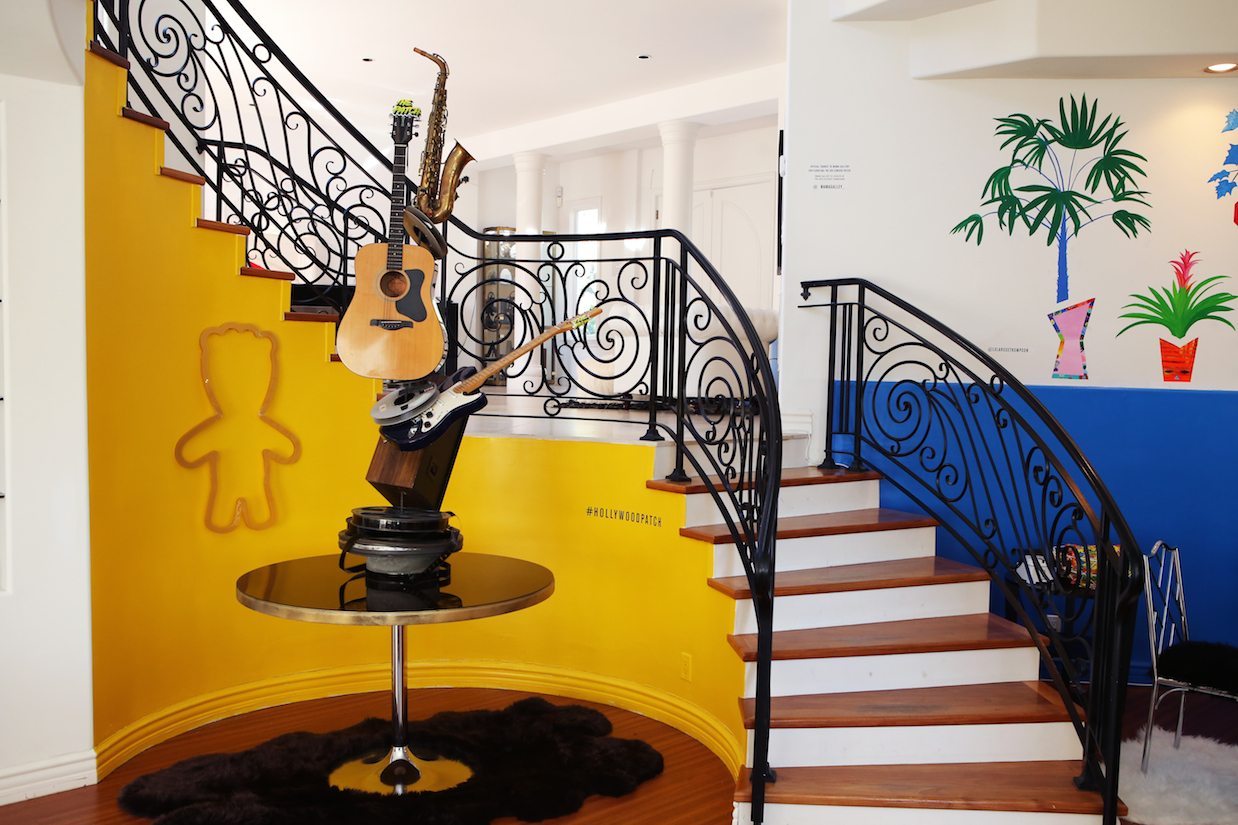 This past weekend I got the unique opportunity to visit the Hollywood Patch House, an innovative and functional house for music artists to stay and work, and break up the monotony of life on the road. Nestled deep in Hollywood Hills with pristine views all around, the Hollywood Patch House is a truly serene place to both live and work for a few days. This particular weekend saw ATTLAS, Matt Lange, No Mana, BlackGummy and Monstergetdown, all artists on deadmau5’s label mau5trap, enjoying a perfect Southern California Saturday at the Patch House.

As previously mentioned, the purpose of the Patch House is two-fold, first it’s a space for artists to retreat to and unwind from their hectic day-to-day lives, second, it’s a fully functional house where the artists can live and have access to a plug and play studio to focus on work as well. Some artists, such as No Mana and BlackGummy, took the opportunity to head into the plug and play studio and work on some new material. No Mana had this to say about the opportunity staying at the Patch House provides.

“I love it, I couldn’t ask for more. I guess it’s more like when we feel like it, I mean for me, I’m mostly a make music in my own studio by myself kind of guy. I can always collaborate online and send back and forth files. But this is really good, we have face to face time; we can work together simultaneously. It’s cool to meet everybody and see each other in person, rather than just seeing everyone online, we’re all humans.”

For others, such as Canadian producer/DJ Jeff Hartford, better known as ATTLAS, this was a chance to unwind and detach from the music world. In fact, Jeff was the star of the day, as we has busy in the Patch House kitchen, cooking up some gumbo…literally, he was stirring for more than an hour. Jeff is a stereotypical Canadian, and not in a bad way, he is the friendliest chatterbox you’ve ever met. Our conversation steered from food to music to baseball (naturally he’s a Toronto Blue Jays fan).

“Here’s the thing, being on the road is amazing, I get to see these new cities, these new people, share the music that I wrote in my room, that meant something to me personally, and then have them reflect an emotional experience back, and that’s amazing, but a lot of it’s like, 20 hours of travel for two hours of amazing exciting nights. The hotels are lonely, the airports are isolating, and what the Patch kind of counters is saying no, no, this isn’t a hotel where you have to go find a restaurant or room service, you have a kitchen where you can cook food. And there are bedrooms, plural, with your own shower, your own bathroom, you don’t have to check out at a certain time, and with this label, we’re all pals and we all get along. So what that means is we can kind of hang out and like “Hey, I was working on this.” And I don’t know about the hotels you stay in, but no hotels that I stay in have studios in them, and grand pianos, and Gibson guitars. And I think that’s the big plus in this situation is that, there’s a creative ebb and flow. Sometimes you want more tacky, sometimes, me, I’m a little bit more melodically inclined, but, what this gives me is a chance to indulge in those sides.”

“It’s funny because it’s not just the support, but it’s also the push. I mean if I wasn’t on mau5trap I would be going to the show (Random Label Party) as a fan. With all of these guys, individually, as artists and creators and people, I’m a fan of them. To be able to communicate on a regular basis and things like this to actually hang out together is unreal, because we’re sharing, okay here’s what I’ve heard, you think, oh no, I’m not that smart, I gotta push myself a little bit harder. I’ll play something and they’re equally as impressed, I think it’s a creative push. We’re not competitive with each other but we do want a lot from ourselves. And what that gives you is a chance to say okay that’s a new hurdle and I want to meet that and surpass it. We’re a competitive bunch but we’re first and foremost musicians and creators and that’s kind of why it’s been a blast staying here.”

You may be wondering why it’s called the Patch House. Well, upon entering the property I noticed that there were packets of Sour Patch Kids everywhere. It took me a minute, but, yes, that’s right, Sour Patch Kids is actually the sponsor behind this amazing artistic endeavor. Hollywood is actually the third Patch House, the other two are in Brooklyn, NY and Austin, TX. If you want to see more of the Patch Houses, you can check out their Tumblr page. You can also watch interviews and Patch House Sessions on their YouTube page including past interviews with Louis the Child and Tommie Sunshine.