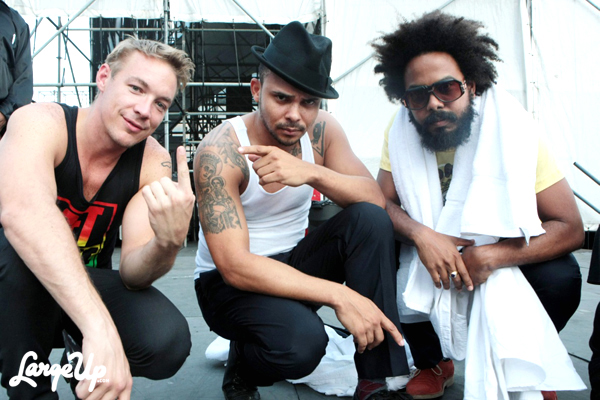 Diplo Fires Back At Accusations Of Cultural Appropriation

Diplo, one-half of Jack Ü, one-third of Major Lazer, and don of Mad Decent, has been accused of cultural appropriation for pushing the evolution of music. The producer has been pulling inspiration from dancehall for years as part of Major Lazer, and even longer as just Diplo, so it certainly comes as a surprise to hear his latest work on “Lean On” and “Cold Water” has caught flak for misrepresenting Indian culture.

Excuse us while we agree wholeheartedly with Diplo’s statement that music would be “f*cking boring” if artists didn’t draw inspiration from other traditions.

“For me, the band that’s most influential to us is The Clash. Nobody said, ‘You’re culturally appropriating,’ when they made Rock The Casbah. I think what makes a great artist is someone who can change the direction of music, not someone who stays the same all the time. Otherwise music would be so f*cking boring.”

“When I grew up, no one told me what I was supposed to listen to. I grew up and I loved music. I didn’t think: ‘Oh, I’m white, I’ve got to play a guitar.’ I never had a guitar. I really fucked that up. I only had turntables. I wish I got a guitar, then I wouldn’t have so much criticism.”

It seems a blatant case of honing in on the “random white dude be everywhere,” instead of acknowledging the influence of Trinidadian DJ Jillionaire and Miami’s DJ Walshy Fire, the other two-thirds of Major Lazer. In fact, Diplo says he couldn’t get anyone to pick up “Lean On,” even after approaching Nicki Minaj and Rihanna. “People didn’t understand it. Now, every song on the radio sounds like Lean On,” says Diplo. But Major Lazer has certainly learned that the power of superstars is nothing of what it used to be, “I’ve always worked in an industry where your goal is to give [a song] to the biggest star. That’s gone now.”