From the fog-laden forests of the Pacific Northwest, a new sound is emerging from the underground, one you should most definitely be keeping on your radar. Sitting somewhere between the realms of drum & bass, grime, and trap, this fast-growing style presents itself as an intersection of the UK and US half-time movements. It’s fresh, it’s raw, and we can’t get enough.

At the forefront of this sound are artists like Mike.iLL. His upcoming album Tip the Scales is a straight-up smorgasbord of bangin’ beats and low-end fueled heaters. It’s a perfect intro to anyone unfamiliar with music of this nature. While the album won’t be released in full until October 17th, you can get a taste of what’s in store with the first single, ‘Watch That Thing Go’. A collaboration with fellow Washington-based producer, Subduktion, the tune features growling sub-bass meshed flawlessly with subdued 808s and crisp percussion. Distorted synthesizer notes flit through the background, adding a distinctly digital feel; you could fight your way out of the Matrix itself with this tune pumping in your ears.

Best of all, it’s a free download. Check out the full stream of ‘Watch That Thing Go’ after the jump and  keep your eyes peeled for the full release of Mike.iLL’s Tip the Scales on MalLabel Music.

But, wait, there’s more! If you’re out in the area, Mike.iLL and MalLabel have also teamed up for a stellar album release party on October 20th. The show will feature the man himself, plus performances from fellow movers and shakers in the scene like Shermgerm and Pilz Beats. All the info you need is on the flier below, check it out! 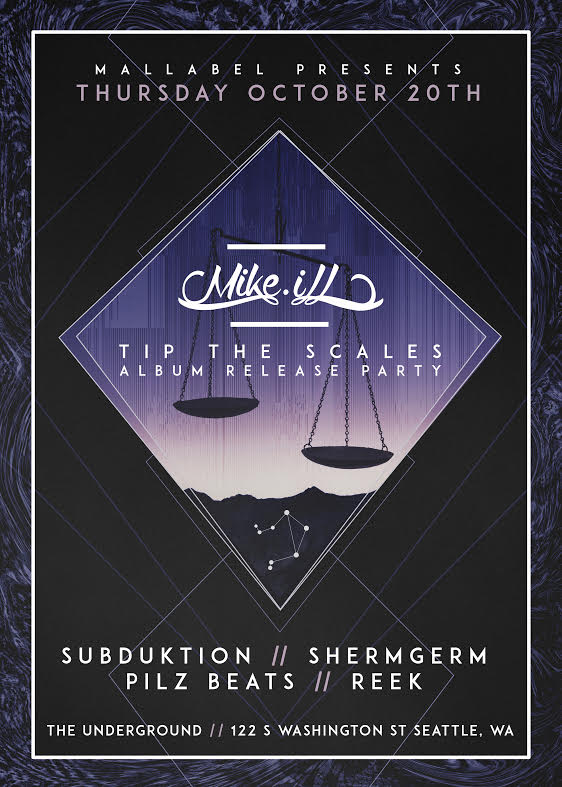