I came home from Groove Cruise, as I have the past few times, tired and wanting to go back for more.

The biannual cruise, the longest running of its kind, sailed from San Diego to Cabo San Lucas over Halloween weekend, hardly your typical Halloween EDM festival. And yet in spite of all the major festivals across the nation hoarding their own selection of exquisite artists, Groove Cruise – a venue which literally prevents artists from leaving – managed to attract its own cadre of impressive performers.

This year still presented its own challenges, and not everything was as great as it could have been, nor as great as I’ve experienced on past sailings. But there’s also plenty that I loved about it. And so with this in mind, I chose to frame this review in the form of “the good, the bad, and the ugly.”

I rarely have anything bad to say about the music on Groove Cruise, and I don’t have anything bad to say this year, either. As a self-diagnosed bass head, Groove Cruise my once-a-year escape and opportunity for experimentation with house, techno, and trance. And with artists like Dannic, Ørjan Nilsen, Mark Knight and more on board, there was a lot for me to experience. 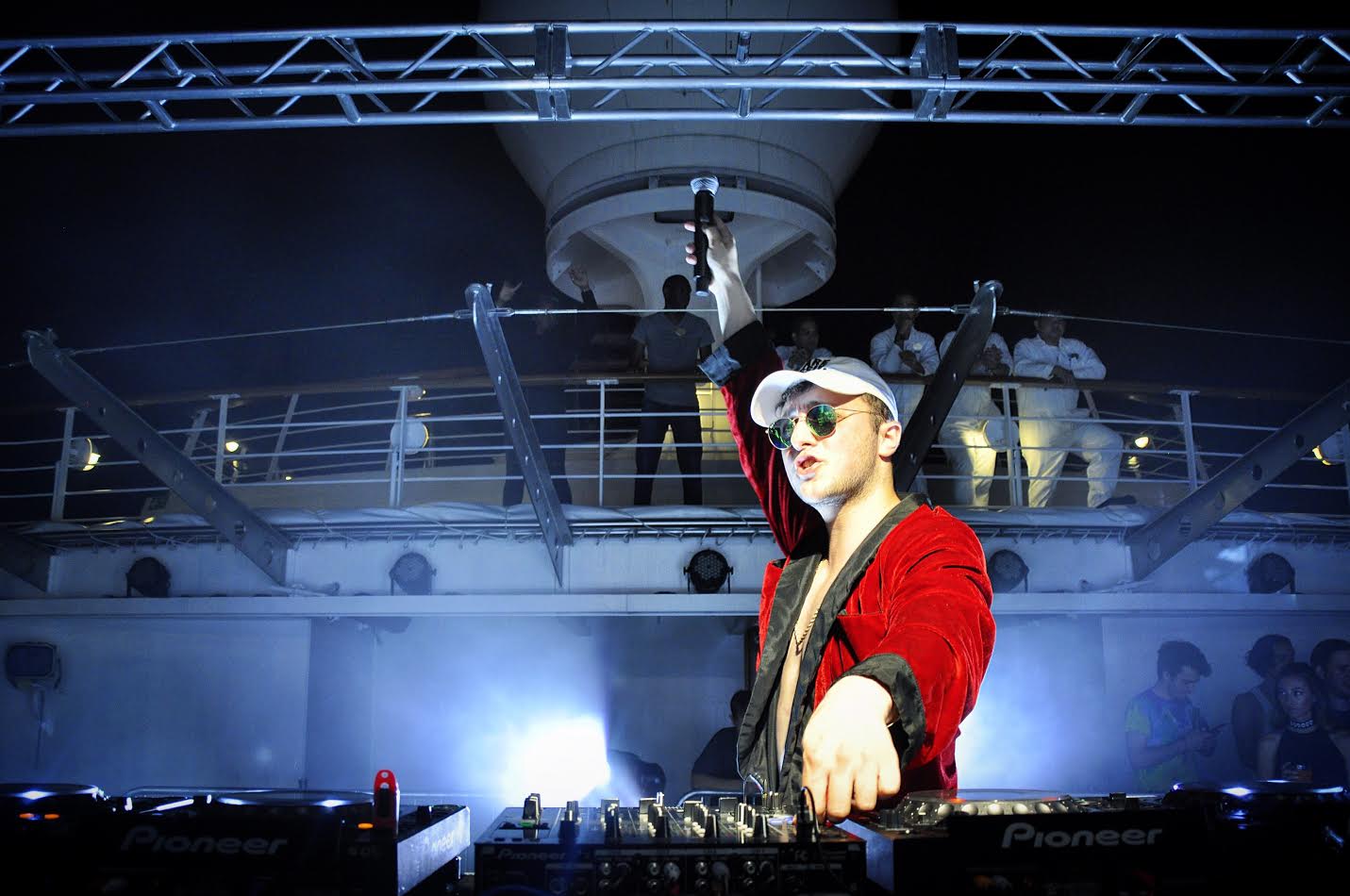 That being said, I stayed up for the final sunrise set – as so many do – to hear DSK CHK’s throwback vinyl house set and it was easily the best house set I have ever heard, if not one of my favorite sets I’ve ever heard overall.

Cabo was really fucking hot – good thing there was a massive pool and ocean to chill out in! Not to mention the cafe at the side of the pool which offered a much-needed respite from the sun and some great food. ME Cabo was really a haven and a wonderful location for a party.

I heard a lot of complaints about the cabanas, but most were from people who hadn’t read the fine print about bottle minimums or some such. For everyone else, if you weren’t being a complete leech, people were welcoming and happy to share their space and a lounge with you. 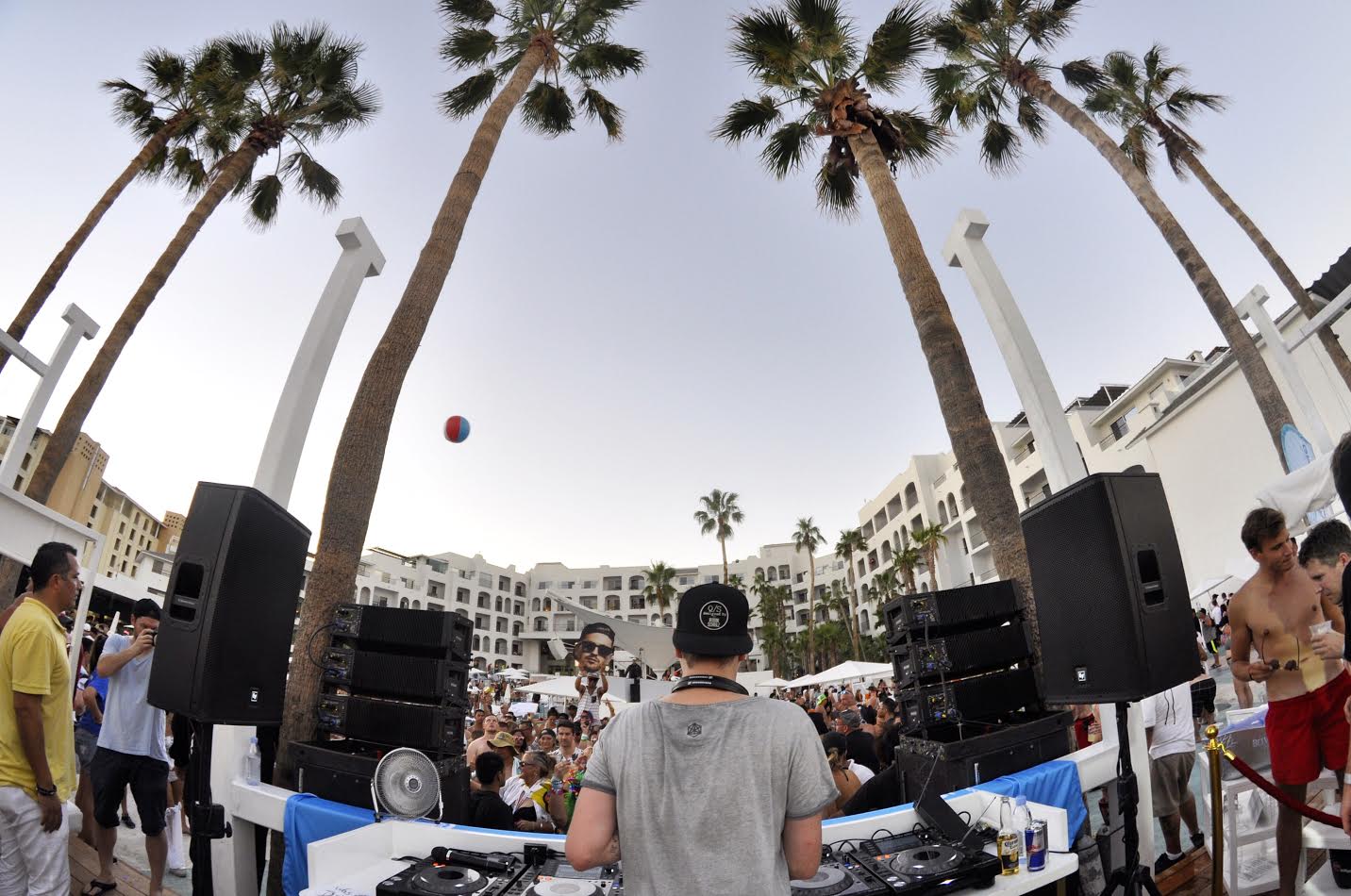 Unfortunately I wasn’t able to make it to Breathless for the late-night party, but I didn’t hear a single complaint about it.

The Whet Travel and Norwegian staff couldn’t have been nicer and more involved in the cruisers’ experience. Rafi and Jason could often be seen walking around the pool deck or randomly in a hallway and were always eager and willing to help and answer any questions.

There’s also a unique calmness about a festival without actual security. It didn’t hit me until a couple days in, but there’s really no one around to tell you that you “can’t go in here.” There aren’t any fences keeping people out of some super VIP area and the artists aren’t afraid to get into the crowd and dance with you, or have a meal with you. (Shout out Goldfish for that wonderful breakfast conversation.)

Beyond the music, Whet Travel always makes a point of giving cruisers something to do outside of dancing. These activities generally foster connections with other cruisers and may even give you a chance to let off some steam or get a few free shots of liquor for participating.

The ever-popular deep house disco made a return this year with sessions on three separate days. There was also a Giant Twister Game on Saturday, as well as a Tequila Tasting with Goldfish. You could participate in the Whet Foundation Volunteer Trip on Monday morning before the Team USA vs Team Europe Volleyball match in the afternoon, followed by the Halloween costume contest in the evening. 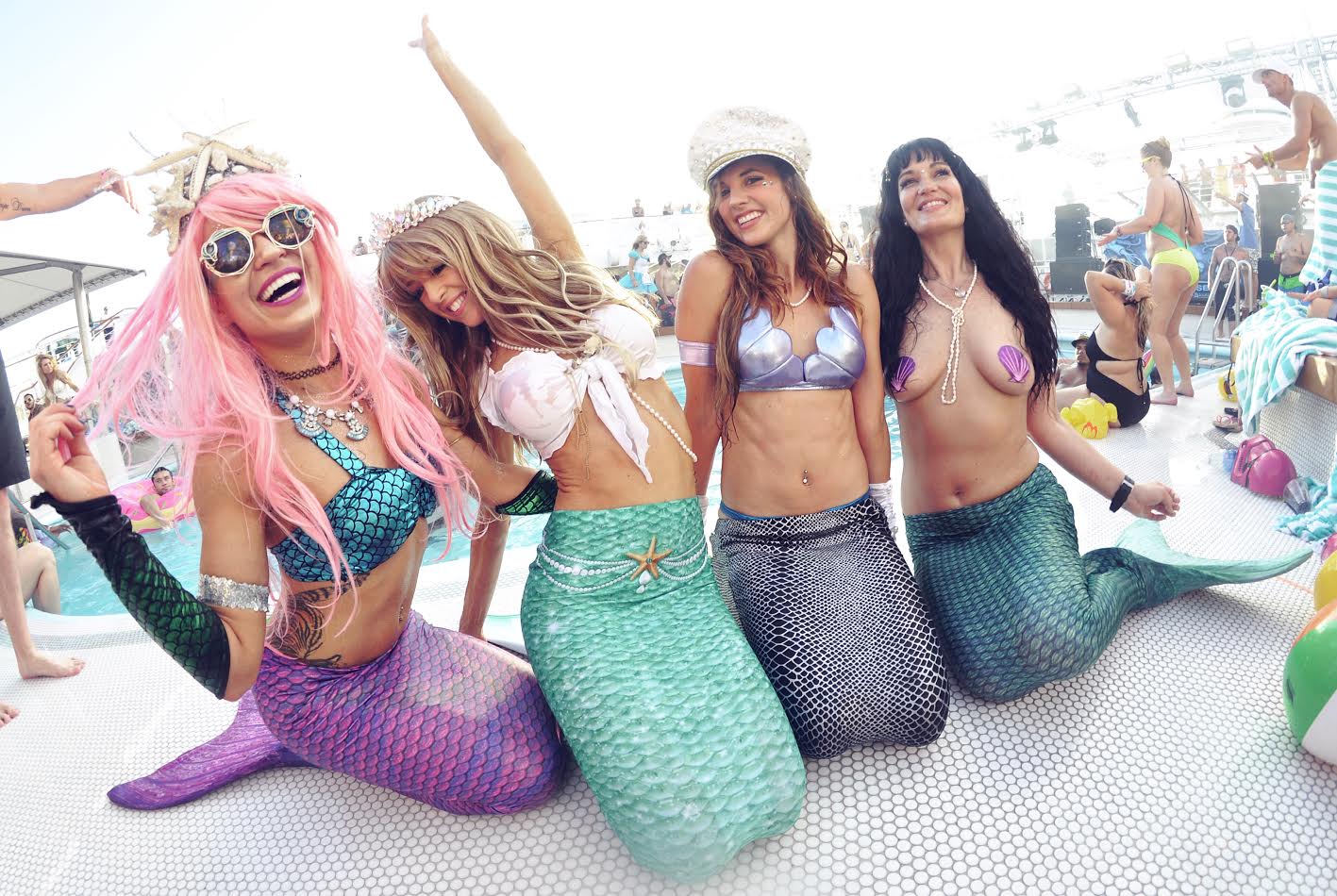 Beyond that, there’s a complete casino on the ship, as well as a basketball court and a couple of ping pong tables, a pool, hot tubs, buffet and so much more.

The theater is supposed to hold the biggest of the headliners of the cruise. This year, that would have been Gareth Emery, Dannic, Arty, EDX, Super8 & Tab, Audien and more – and the venue should be proportional to the talent. Unfortunately, the theater this year was a shell of what it should have been. Perhaps I was spoiled by Groove Cruise Miami in January with its absolutely massive theater that housed Darude, Markus Schulz and more, but the theater this year was cramped and not particularly suited for the type of show that it aimed to present.

Rather than a sprawling area with big lights and sound, it was a small (relatively) room that I believe failed to convey the size of the artists that it hosted. The artists still put on great sets, but I feel like the effect could have been grander with a grander room.

Cabo was great with the exception of Breathless. While I heard nothing but good things from the people who made it to the venue, many more were unhappy with the fact that transportation wasn’t provided. It wasn’t a terribly long walk, nor was it a terribly expensive cab ride, but for the price of a cabin on the ship, it seemed to be expected.

Seriously, where were you guys? I didn’t see a full crowd at a single set the entire cruise except for in Cabo. Beyond that, most people were sticking to the shady side of the pool deck, or were somewhere else entirely during the theater sets. Don’t get me wrong, we had fun without you with plenty of room to dance and move – but be honest with me, did most of you go just for Cabo or something? 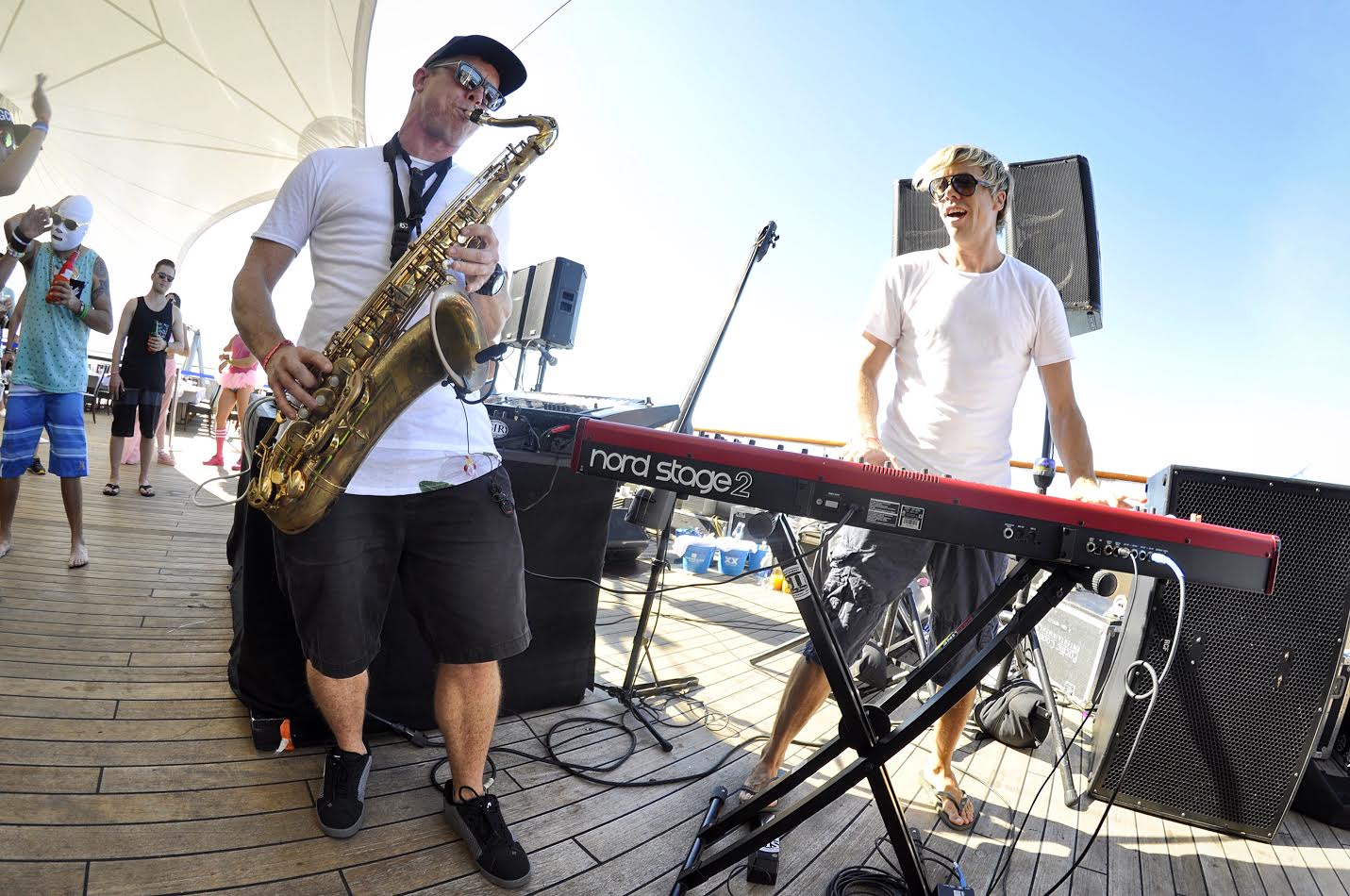 The choppy waters on the last day

This isn’t the fault of Groove Cruise or Whet Travel at all, but oh my god, could the boat stop moving so much on that last day? Seriously, it felt like I was taking a balance test. In response to my grievances about the crowd, I’d be willing to bet that many people were stuck with motion sickness in their rooms on the final day.

The one good thing about the choppy waters, however, was watching the impromptu wave pool develop on the pool deck – that was pretty cool.

The not so great

The groping and lack of personal space

Look, I get you guys are drunk and looking to hookup, but it is not okay to go around grabbing women’s asses and grinding on them when they clearly don’t want anything to do with you. Personal space on a cruise ship is going to be limited since you’re going to be seeing the same people day after day, so we shouldn’t have to make a mental note to stay away from any single person, either. Pay attention to basic social cues and you’ll be good.

This is something that has happened on every Groove Cruise so far, and is not so much the fault of Whet Travel, Norwegian Cruises or any partner of the voyage, but the mentality of the cruisers themselves. The average age on Groove Cruise is above 30, so it’s incomprehensible that something so simple still needs to be taught.

The lack of round-the-clock pizza in the buffet

Do I really need to say anything else about this?

All things considered, I will never have a bad time on Groove Cruise, it’s just not possible. My own neuroses and complaints aside, Whet Travel consistently provides a home to over 2000 people twice a year and we’ve become a real family. When you see the same people year after year, you get to know them and develop friendships and that’s not something you can easily replace.

I look forward to my next Groove Cruise!