Porter Robinson & Madeon have just successfully sold out 2 nights for their Shelter Live Tour in one of the biggest cities in America. The electronic music tastemakers played both Thursday and Friday night in New York City back to back with a DJ set at Webster Hall for the Shelter after party following a sold-out Friday night show.

The event was all ages and the doors opened up at 7. The first act to take the stage was a Toronto-based producer who goes by the moniker, Robotaki. The electro-pop phenom warmed the crowd up with some popular SoundCloud tracks like Illenium’s remix to Flume’s “Say It,” Rezz & Ratio’s “Alien,” and of course his very own original “Ghostboy.”

The next DJ that took the stage was a masked Paris-based electronica producer named, Danger. It was actually my first time seeing Danger live. His DJ’ing, to be honest, had the crowd in kind of a daze. The majority of the crowd was sitting down for his performance simply because I personally feel like his music live was more for personal listening as compared to crowd pleasing. After the event later that night I checked out some of his music on his SoundCloud profile and to my surprise I absolutely love his work. Most of his tracks are very soundtrack-like which are great work to due to the absence of a vocal narrative. His unique war themed, Lion King-like visuals were nailed to a tee with his music. Simply put Danger put on a true musical experience.

There was about a 10-minute setup for Porter and Madeon’s production to be completed, which was shorter than expected and allowed people to get up and gather refreshments. The moment Porter and Madeon took the stage the entire crowd immediately got up and gave roaring chants of exhilaration. The two artists opened their set up with their hit collaboration, “Shelter” to which Madeon sang live and the crowd responded with pure enthusiasm. Porter did not shy away from singing as he covered one of his personal favorite Madeon tracks, “Beings” watch below!

The entire show included live edits, reimagined takes on each other’s works, vocal performances, and of course each artist’s respective classics. The Shelter Live Tour came with an entirely new visual experience reminiscent of Porter & Madeon’s anime-inspired aesthetic. Their track selection was mainly comprised of larger than life melodic ballads to which they played roughly an hour and 30 minutes of. Porter purposely stayed away from his heavier music like Fresh Static Snow (Live Edit) & The Thrill (Porter Robinson Remix) on purpose to keep the mood of the night in its awe-inspired setting.

Once they played their “last” song everything randomly turned black which left the crowd wondering what was going on for a solid 5 minutes. Unbeknownst to nearly everyone Porter & Madeon actually took to the crowd to perform Shelter live which was transitioned into Porter’s most iconic track “Language.” Most of the people by then had left the theater as they had thought the event had finished which created for a less populated and more intimate crowd, watch below!

Porter Robinson & Madeon’s Shelter Live Tour will go down as one of the best tours of 2016, no question. The tour combines the best of their individual catalogs into one interactive performance fusing emotion, live instrumentation, visual artistry and cutting edge technology.

If you have not gotten a chance to see Porter & Madeon live in action do not stress. The show goes on in various cities across America including: San Francisco, Los Angeles, San Diego, Denver, Salt Lake City, Sacramento, Vancouver, Portland, Spokane and Seattle and Vancouver too for Canadians. If you live in America fear not the Shelter Live Tour is expanding across seas and stopping in at places in Europe and Australia! 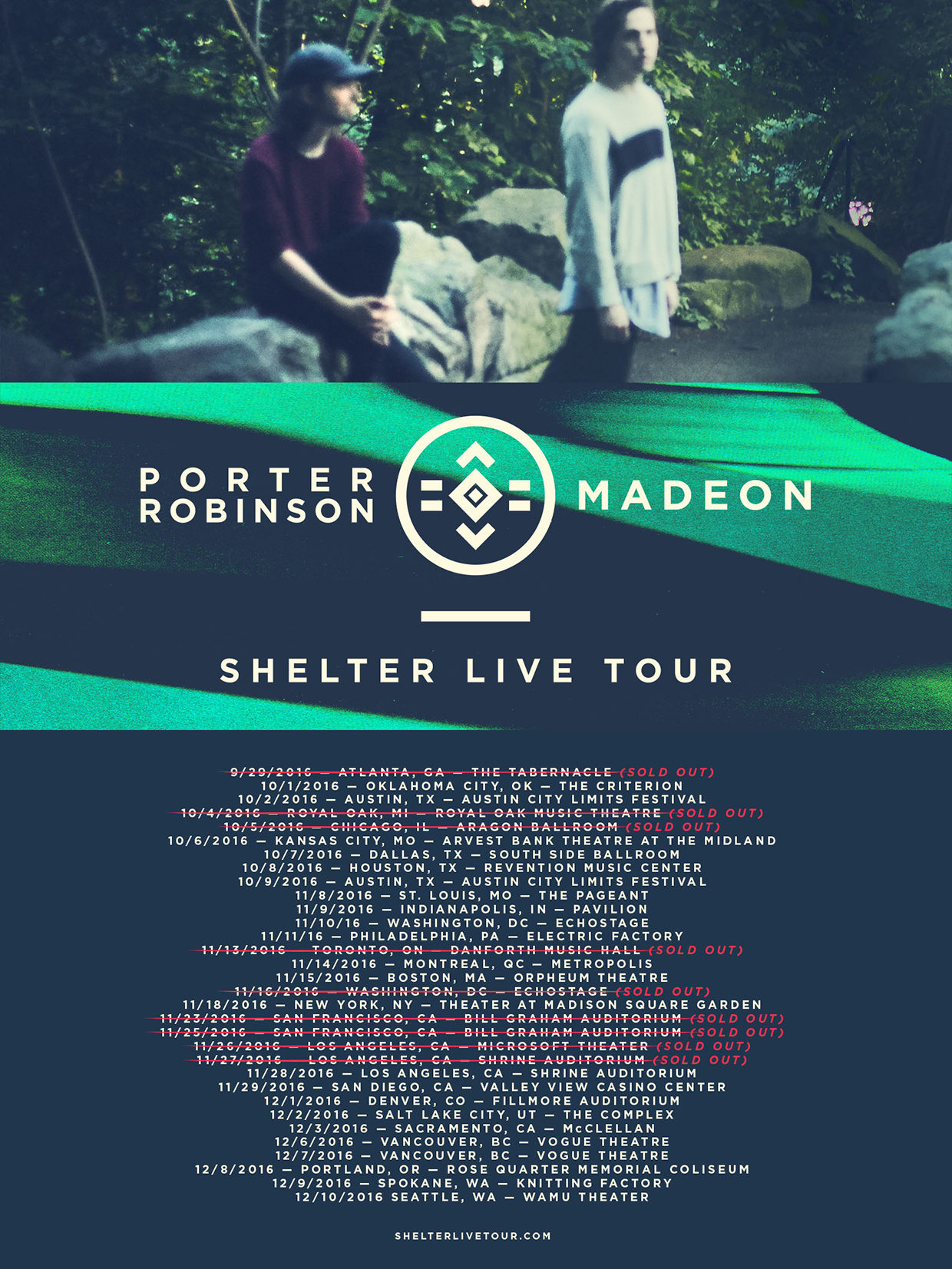