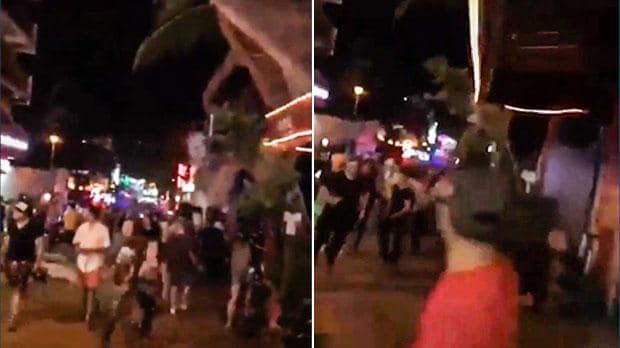 “They got denied because they didn’t want to be patted down,” he told Billboard. “Three of them left out of our vision and two of them shot security guards at the entrance, ran in and aimlessly opened fire. There were two guys there, not one like the news incorrectly reports.”

The man said he later saw one of the men walk through a police perimeter, this time without his leather jacket.

“One of the dudes I saw try to get in was just casually walking with everyone else with the gun in his hand,” he told Billboard. “We looked at each other and he sort of waved it at me, as in ‘it’s none of my business, keep walking,’ and I wondered why the police were not doing a single thing.”

Billboard notes that the man’s report aligns with one from Mexican publication Semanario Playa News Aquí y Ahora, which blamed the attack on a drug cartel dispute. Quintana Roo state is a longstanding hotbed of cartel and drug-trafficking activity, sources said. The Quintana Roo District Attorney’s office told Billboard the shooting was most likely drug-related and aimed at a single target.

A 23-year-old man from Los Angeles told Billboard he saw people outside of Blue Parrot lining up in strange formations before the shooting began, suggesting several of them knew it was coming.

“Outside the club it seemed like there were people actually squaring up as though it might have been cartel-related,” he said. “It gave them the feeling that something was about to happen.”

A DJ told Billboard he was confident that the shooting came from multiple gunmen. After jumping over a beachside fence to escape the fire within Blue Parrot, the DJ said people that were with him saw a second gunmen running down the beach. It “felt like a statement,” he told Billboard. The official version of events “do not check out” to him, he said.

One industry source told Billboard he heard gunfire coming from at least two blocks away from Blue Parrot while escaping the scene. He said he witnessed “yelling that they saw somebody shooting from a car,” and cited friends’ accounts of shooters both inside and outside the nightclub and on the beach.

“It couldn’t be in the same spot,” he told Billboard. “I must have heard shots that happened from the beach or street. How can one guy be shooting all this and not get caught?”