Earlier this week, Insomniac head Pasquale Rotella took to his Snapchat to reveal the first information about the Kinetic Field stage design for the festival’s 21st installment this June. Referred to in a “Kinetic Gaia Storyline” page, the themes and design elements of the forthcoming main stage were revealed.

A “Great Kinetic Hall” is mentioned after the initial, thematic lines, where attendees “can escape everyday life and share stories with other members of the owl community.” In the middle, the passage continues, will be a statue of the Kinetic Gaia. It will hold four compasses that connect with owl communities around the world, perhaps referring to the global live streams seen during last year’s event. There will also be two guard owls on either ends of the stage, the passage says, to “protect the statue of the Kinetic Gaia.”

What the Kinetic Gaia will look like, we can’t yet say. Judging by the language, however, she appears to be a type of all-knowing oracle that will stand as the centerpiece of the epic Kinetic Field set up.

Check out the Snapchat post below, and read the full transcription further down. 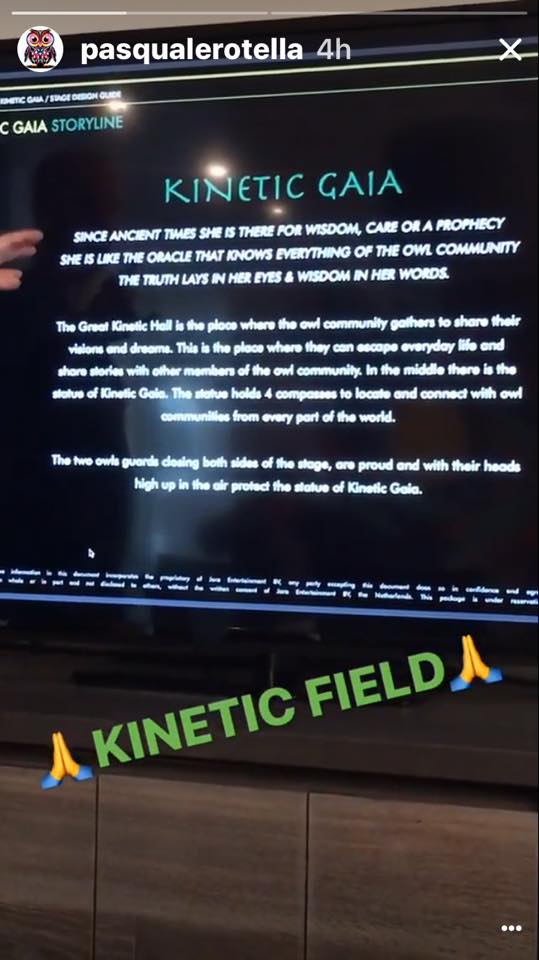 “SINCE THE ANCIENT TIMES SHE IS THERE FOR WISDOM, CARE OR A PROPHECY SHE IS LIKE THE ORACLE THAT KNOWS EVERYTHING OF THE OWL COMMUNITY THE TRUTH LAYS IN HER EYES & WISDOM IN HER WORDS.

“The great Kinetic Hall is the place where the owl community gathers to share their visions and dreams. This is the place where they can escape everyday life and share stories with other members of the owl community. In the middle there is the statue of Kinetic Gaia. The statue holds 4 compasses to locate and connect with owl communities from every part of the world. The two owls guards closing both sides of the stage, are proud and with their heads high up in the air protect the statue of Kinetic Gaia.”