When a party series crosses not only borders but oceans successfully, it’s doing something right. Electronic music parties often expand beyond their meager beginnings, and HYTE exemplifies such an expansion perfectly. Known for its Amsterdam and Berlin events, HYTE has recently made the trek to the United States for multiple New York parties. Now, HYTE descends upon Miami during Miami Music Week to offer one of the best lineups of the entire 2017 festivities.

Scheduled to take place on March 24 at Mana Wynwood in the Wynwood neighborhood of Miami, HYTE Miami brings usual HYTE favorites among some of the best DJs and producers working in electronic music today. HYTE is known for its insane b2b pairings, and this new event offers two rare b2bs: Loco Dice b2b Luciano and Danny Tenaglia b2b Chris Liebing. Those sets alone would normally be enough to define an event, but HYTE goes the extra mile and selected South Africa’s, now Drake-sampled Black Coffee, the eclectic and genre-defying Maya Jane Coles, rising duo Pan-Pot, crossover star Tiga and Puerto Rican DJ Caleb Calloway. HYTE managed to pick some of the best producers and DJs playing Miami Music Week and rounded them together under one roof for a truly massive event, and we’d wager HYTE Miami will go down as one of the best Miami Music Week parties yet.

Head to Resident Advisor to purchase tickets and check out HYTE Miami’s set times below: 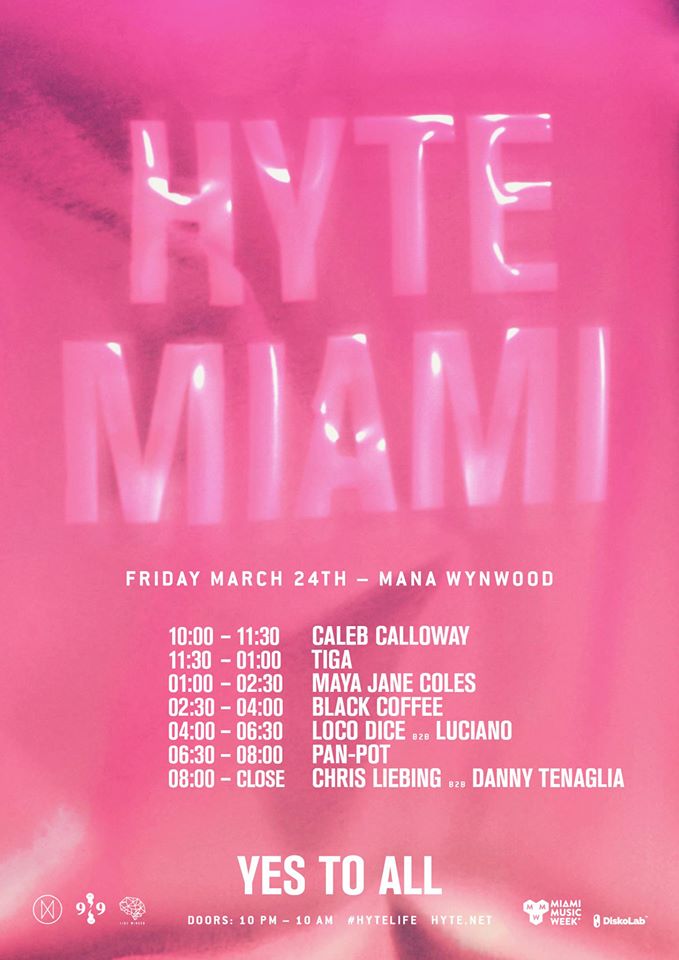