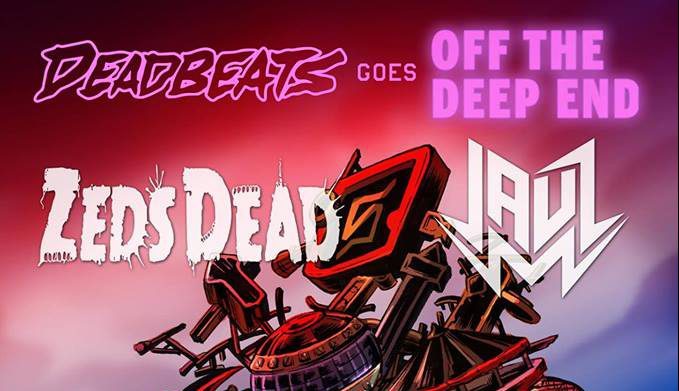 Miami Music Week is like a buffet where people find themselves surrounded by various options to fill up their afternoons and evenings, but still can’t possibly have everything on the menu. Starting from March 21st and lasting through the 26th, MMW delivered another year of outrageous pool parties and nightlife events that make most other cities in the United States tremble at the thought of just hosting one of these wild parties. Thursday night in that week had plenty of competition but none of them reached the level of raging rowdiness and diligent debauchery like Deadbeats Goes Off the Deep End in Wynwood that evening.

Hosted in Soho Studios, the event was a collaborative effort between Shark Squad leader Jauz and Deadbeats heads Zeds Dead where they brought along their peers to perform for a massive Miami crowd or act as special guests between songs. The best part about Deadbeats Goes Off the Deep End was how unexpected the entire evening was with wild back-to-back sets and the new music blaring through the speakers.

The event kicked off around 10 p.m. where Sober Rob warmed up the audience as it grew and grew. His latest collaboration with Pham and Maui titled “Alibi” was a definite attention grabber to the young crowd as they flooded the warehouse to kickoff a nocturnal rave-scape. Following him was Nebbra with punchy bass music and melodic gems like his track “You.” But by the time his set wrapped up around midnight, it was obvious that it was time to bring out the event’s biggest weapons in its arsenal.

Known for their collaboration “Crank It” in 2014, Ghastly and Mija were announced on the lineup when it dropped in February. But there was a mystery guest to perform back-to-back with them and it turned out to be the one and only NGHTMRE. Together they dropped everything from A Day to Remember to Kendrick Lamar with bass music bangers in between to get the crowd head-banging for one full hour. The trio massacred the auditorium with their upbeat track-selection and the surrounding visual production from the LED screens.

Following Ghastly, Mija, and NGHTMRE was the first headliner of the evening Jauz. From playing classic hits like “Rock the Party” with Ephwurd and “Can’t Feel the Volume” to his most recent bangers like “The Game” and his remix of “PLUR Police” by Knife Party, Jauz kept the crowd under his energetic spell during his hour slot. He amplified every person in the room with his yelling MC-style interacting with the people in ways that ignited the venue in new ways. And to top off all the hype oozing out of Jauz’s set, there was another headliner and a another mystery back-to-back set for the next three hours!

The next headliner Zeds Dead brought their grimiest set ever in Miami to date. The last times they performed in the 305 has been during Ultra, Life in Color, and at a now closed venue called Grand Central where the duo brought their filthiest productions and VIPs for the local bass heads. But this set, with its sheer size and insane visual production, took the Toronto duo from the hype of their previous appearances and sent us higher and higher into bass paradise. Playing songs from their recently released debut album Northern Light and from their label’s first compilation album, Zeds Dead owned the night…or so I thought.

At the very end of the set, Jauz returned on stage with Zeds Dead to perform a special back-to-back set playing everything bass-laced. It was a phenomenal hour of tracks from Skrillex, Infuze, Bellecour, Carnage, and more that kept the house pack til four in the morning. Even as Herobust, Troyboi, and surprise guest Grandtheft came to the stage to play out the last set of the show, the whole building was filled with ravers getting their last fix of hard-hitting bass before the sun rose.

All in all, Deadbeats Goes Off the Deep End was a marvelous evening of bangers tunes and moody music. There were even surprise appearances from Netsky and Dirtyphonics who hopped on stage to show their support and add their celebrity to a night celebrating bass music. It cannot be understated how everyone in that venue (myself included) was dancing, head-banging, or engaging in some form of repetitive motions because the music was just so darn catchy. If only I had one of those large, portable battery chargers to keep my phone alive long enough to take more photos.