by Rain Robinson
in Interview

While I was at Minus Zero Festival in Vermont, I had the fortunate opportunity of speaking with upcoming duo VAVO comprised of Jesse Fischer and Alden Martin. The two young house producers have an exciting past with releases gaining support from W&W, KSHMR, Dash Berlin, and so many more. I sat down with them to discuss what the future holds for them as well as what shaped them into the artists they are today.

How did you guys start producing together?

Alden: Jesse was in a duo previously called Flight School and I heard one of his songs ages ago. So I hit him up to make a track. We made “Cyclone” and we found out we worked really well together.

How is it that you managed to gain support from W&W and so many others so early in your career?

Jesse: Everything we send them they show a lot of love on. Our style kind of reflects their style. The stuff that we make is what they play live.

Alden: KSHMR is one of our biggest supporters and he was one of the first people to support us. He supported the “Seek Bromance” Remix and it did really well. I got to meet him in Ibiza and got his phone number and chatted for a bit after his show.

Jesse: He’s one of those artists that if someone hits him up on Twitter or something he replies. He’s really down to earth, which is hard to find with a lot of artists. We try to do that. Our fans are what make us, so if you can’t show love to your fans you can’t have them.

What inspired the name?

Alden: We fought for ages and ages about what we wanted. It’s hard to think of something that sticks out.

Jesse: If it doesn’t come to you naturally it’s a lot of pressure. Alden came up with VAVO and I was like, that sounds pretty cool.

Alden: I was in my bedroom and I was drawing some things on a pad of paper. I drew a couple triangles and a circle and it looked like VAVO.

Alden: We wanted something that looked good as a logo as well. We used to have it with triangles, but then we got this paintbrush effect that we thought was better.

Jesse: We want to be a household name in dance music. Everyone starts somewhere. When we started, we did the whole who are we kind of thing. It didn’t last too long. It’s hard. Like k?d and those guys who are still somewhat anonymous, it’s hard to keep that up because you want to say this is us, this is what we do.

Are there any upcoming tracks you can tell us about?

Jesse: We’ve got a few tracks coming out on Freeway Recordings, we can’t say too much right now. John [Christian] is super supportive and does amazing mix and masters for tracks. We have a lot of stuff coming out with him. Hopefully some stuff with Mainstage. There’s a lot of stuff that we’re working on right now that hopefully within the next few months will be released. 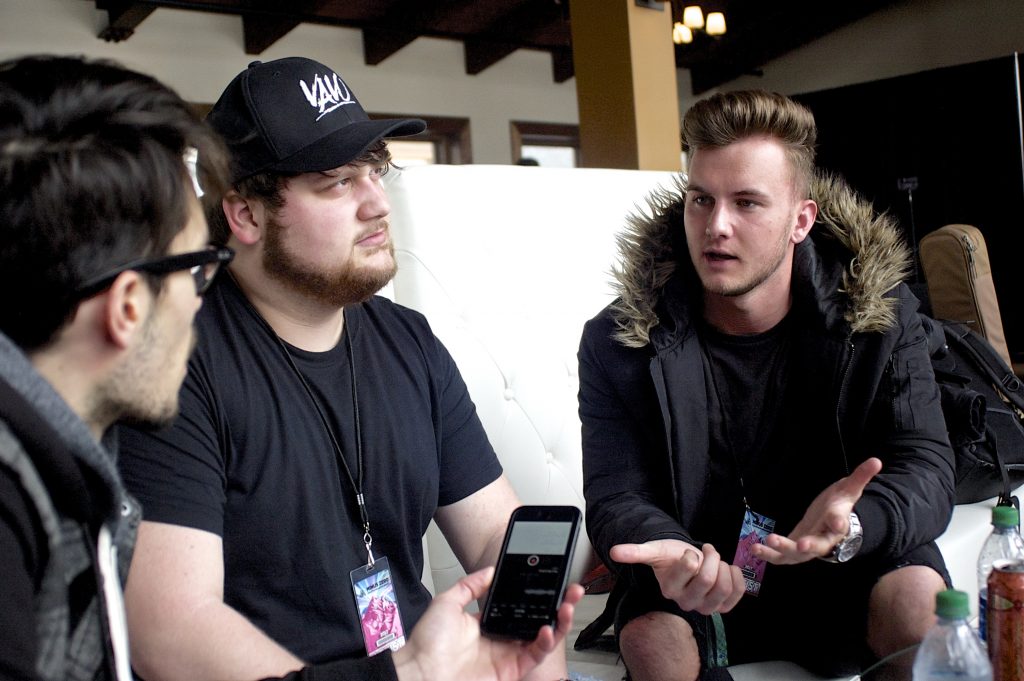 Are you playing any festivals this summer?

Jesse: We’re playing some, but we’re on the phase two lineups so can’t reveal too much right now. We have a couple more gigs in NY with some pretty big names too, also can’t give away to much about those though. We’re playing Story Miami with Nervo, that much I can tell you. We’ve been VAVO since 2015. That’s when we started. But really we’ve only begun playing out and our music has been taking off since we met Max [their manager]. Our first show was in September of 2016. From then to now things have been really good.

What would be your ideal festival?

Jesse: There are a lot of cool festivals too like Minus Zero that are popping up. I think this is their second year and the backdrop here is amazing. Having the mountain right behind the stage is amazing.

Watch out for these two because they’re definitely on the rise!