Paul Van Dyk is a household name in dance music thanks to his long career of boundary pushing electronic music. Van Dyk began seeing success in the 90’s with releases like his remix of “Love Stimulation” and his hit single “For An Angel”. From there, he climbed to the top, becoming the Grammy Award winning artist we know now. Most recently, Van Dyk has announced a North American tour in collaboration with Dreamstate. To honor this exciting news, we dove into an interview with him to discuss the tour and how his recovery has been.

Seeing as this is a big tour for Van Dyk, I was curious how his recovery process has been going.

“The doctors said it will take probably 4-5 years until I don’t feel the long-lasting effects of the accident anymore,” he said, “and that if I reach 50% of what I could before, it is considered a success in the light of my injuries.”

Given that news Van Dyk is determined to push forward, as we can see with this North American tour and with the news of his album releasing May 5th. The first single, “Touched By Heaven” is already out. I asked Van Dyk what excited him most about this album, The Politics of Dancing 3.

“I am a musician with all my heart and making music is an essential part of who I am,” van Dyk said. “So having music being released that I wrote and produced makes it one of the best things in the world.”

Curious to see who’s he has been in the studio with, I inquired if we could expect any collaborations on the album.

“The production process isn’t finished yet, but no. To me it is more important to work with someone who shares the same passion for music rather than someone who is considered famous by the mainstream,” he said.

It’s obvious that Van Dyk places a heavy importance on the musicality and production of each song. Having considered that, I inquired what went into the creation and inspiration of the album.

“Since I started making music live in general, everything I experience inspires my music and since most of the music was written after the accident, the impact and long lasting effects of what happened to me are part of the process,” he said.

Taking the accident in stride and having it serve as an inspiration to the music he has been creating makes me excited to hear what he’s cooked up. I’ve been a long time fan of Van Dyk’s, considering he was the reason I got into electronic music back in 2011. Curious to see if he had thoughts on how the industry has changed in that 6 year span, I asked if he could provide some insight into the constantly evolving electronic space. He offered some wise words.

“So many things have changed, it’s probably easier to talk about what has stayed the same. We, at Vandit record still search and support up and coming artist, we do what we do because we love the music,” van Dyk said. “And for me the accident and its impact has undoubtedly effected me heavily, but I am still as passionate as I have always been about the music I love.”

To show this passion for music, Van Dyk paired with Dreamstate to present his newest North American Tour. He says that “it’s gonna be something really special.”

I will be attending the first stop of the tour in Boston, eager to see what makes this tour so special. You can check out the rest of the tour dates below, or visit the site: 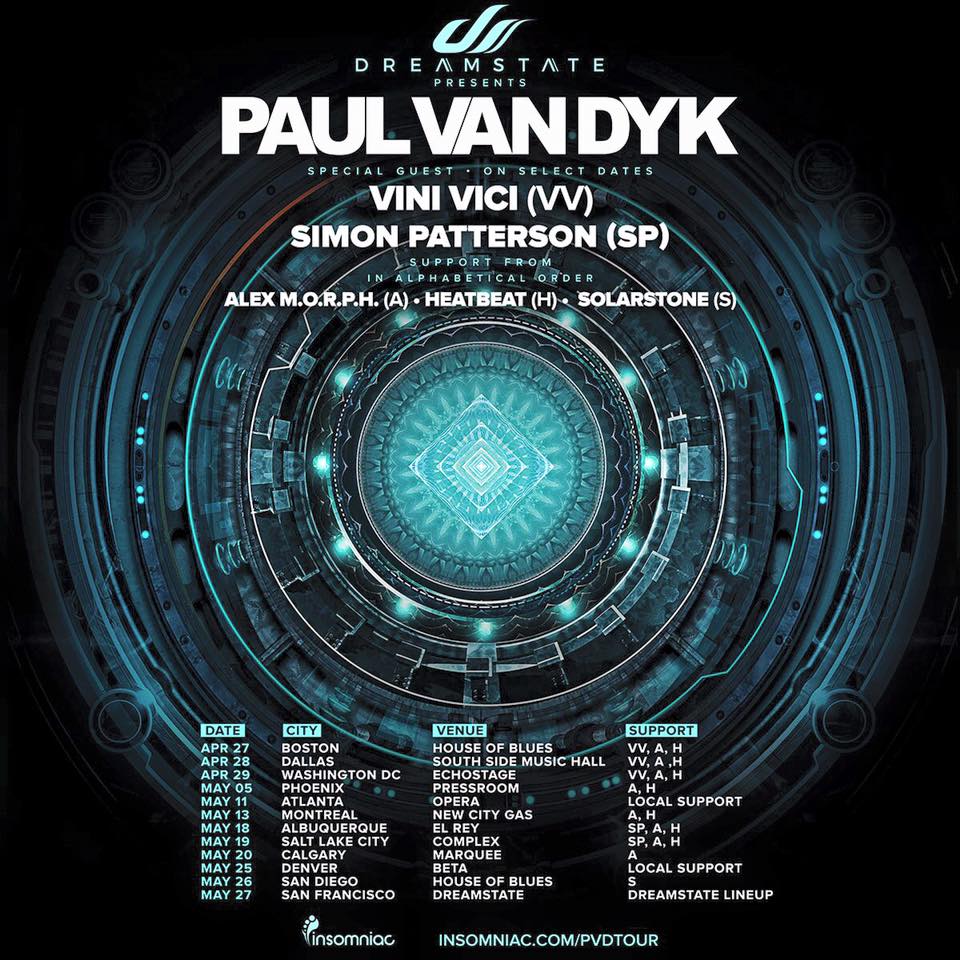