After what can only be described as a disastrous few days for attendees and organizers of Ja Rule and Bill McFarland’s Fyre Festival, the weekend has brought several new updates: an official statement from the festival itself; a video that surfaced of Ja Rule giving his team a boastful and subsequently cringe-inducing toast before the festival was to take place; and information from festival employees that they were warned of the event’s demise in advance of the weekend.

Below, we’ve compiled the weekend’s top stories regarding Fyre Festival. Join us in enjoying the carnage.

First, and most importantly, comes an official statement from the festival organizers themselves. Posted to the event’s official website, the statement seeks to explain some of the confusion and mayhem surrounding the proceedings.

It begins by explaining how Ja Rule and Billy McFarland met and came up with the idea to throw a music festival. They started a viral marketing campaign, created a website, booked talent and employed the help of hundreds of Bahamians. The problems began when people starting showing up to the island, it says.

“The team was overwhelmed. The airport was jam packed. The buses couldn’t handle the load. And the wind from rough weather took down half of the tents on the morning our guests were scheduled to arrive. This is an unacceptable guest experience and the Fyre team takes full responsibility for the issues that occurred.”

The statement goes on to describe the chaos that was reported in nearly every media outlet during the beginning of the weekend. The festival’s top priority, it says, shifted toward getting everyone home safely and securely.

Then, the statement takes a questionable turn. Despite the event’s danger and ill-preparedness – not to mention the avalanche of criticism throughout social media and the news – the statement points to an alleged outpouring of support from the music community. “People were rooting for us after the worst day we’ve ever had as a company,” it says. Wherever this support was coming from, we missed it. Read the below paragraph taken from the statement.

“Then something amazing happened: venues, bands, and people started contacting us and said they’d do anything to make this festival a reality and how they wanted to help. The support from the musical community has been overwhelming and we couldn’t be more humbled or inspired by this experience. People were rooting for us after the worst day we’ve ever had as a company. After speaking with our potential partners, we have decided to add more seasoned event experts to the 2018 Fyre Festival, which will take place at a United States beach venue.” 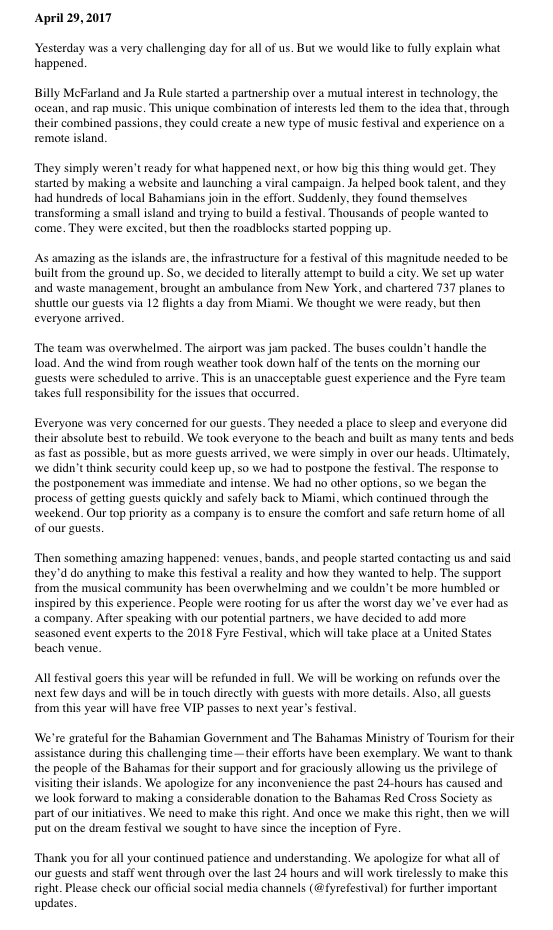 Next up is a video that surfaced on Youtube, showing Ja Rule giving a toast to what is likely a team of people involved in the creation of Fyre Festival. His celebratory tone would imply that the team was unaware of the kind of nightmare the weekend would soon become. Now that we can compare it to the catastrophic photos and videos from the following days, the video now comes as a spine-tingling jolt of cringe.

Below is a transcript of Ja Rule’s toast, capped off by co-founder Billy McFarland.

“- to make this thing come together and be amazing. Rockstar sh*t. And this is me and Billy’s favorite toast, and it goes to all of us in the room. Here’s to living like movie stars, partying like rockstars, Billy?”

Last on the agenda is a piece of news from Motherboard that details a preemptive warning system issued to the festival’s key employees before the festival began. According to a source who spoke on the condition of anonymity, the employees were told to stay in Miami rather than continue their travels down to the Bahamas.

“We’re all getting ready to go to the Bahamas, and one of these new girls calls me on my cell phone and says, ‘Hey, don’t even bother, there’s no accommodations for you guys and you’ll be in a bad situation.’ So, we didn’t even go to the Bahamas, we just stayed in Miami.”

During the months leading up to the festival, the source said, many signs pointed to its probable failure. New hires were not given laptops to complete their work with, and payment sometimes came irregularly.

Now, as Fyre Festival continues to pick up the pieces of a disastrous weekend, the future of the company rests in a more than rickety position.