The BBC Radio 1 Music Bot isn’t normally where I look too to find out about upcoming releases, but in this case, a keen-eyed Redditor from /r/skrillex noticed that the automated feed might have just leaked an upcoming Skrillex release.

The redditor /u/everilmaker89 posted a screenshot of the bot, which is a live Twitter feed of what the station is currently playing, that stated that they were currently playing a mega three-way collaboration between Skrillex, Oshi and Sober Rob. Oshi had a Diplo & Friends mix broadcast on BBC Radio 1 Saturday night which was likely where the bot picked the single up from. 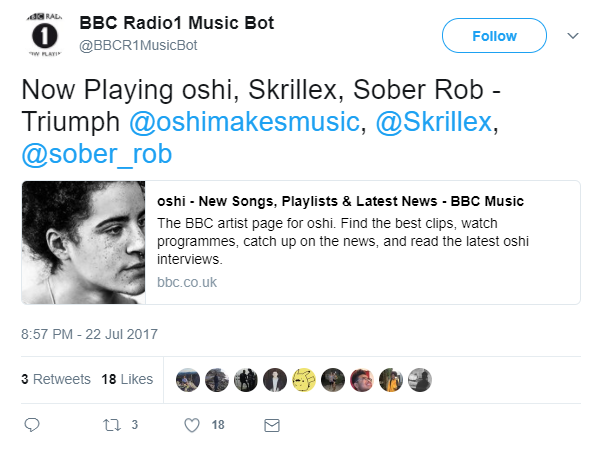 This news, coupled with the news of a Skrillex leak earlier today, leads us to believe that he’s getting ready for a bigger musical push. After all, there hasn’t exactly been an outpouring of Skrillex music lately. But that’s what makes this exciting.

Stay tuned for more news of the single. Check out a rip from the mix below.