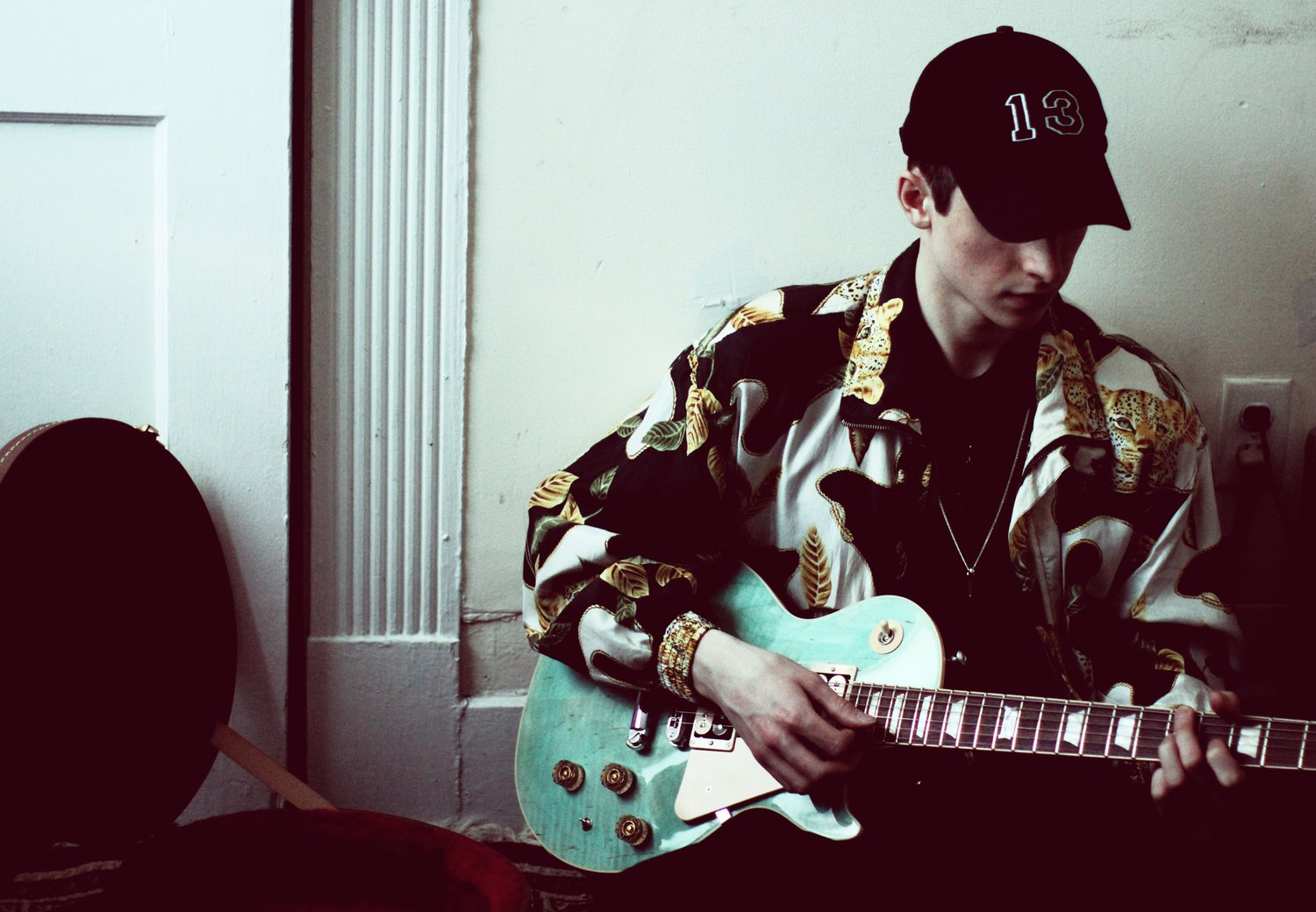 Your EDM Interview and Premiere: Fytch Talks About ‘The Future’ of Trap and Dubstep as His San Holo Remix Drops

Fytch is a producer out of Paris who seems to be re-writing the way dubstep and trap can present themselves. The two bass music genres have largely been focused on EDM in the last few years, and while pop has gotten involved recently, not a lot of rock has merged with trap or dubstep beats. Fytch’s single “Sirens Over Paris” released in December and merged a dubstep beat with what appears to be his first instrument: a Gibson guitar. The track had a lot of early French guitar influence as well, even going back to pre-rock folk/jazz infusions.

Fytch’s new track, “Change Me” features the vocalist Naika and has a bit more of a pop tinge to it, but there are still elements of classical guitar and rock which are definitely interesting in the face of trap and dubstep. Today he released his hotly anticipated remix of San Holo’s “The Future” as well, so check the soft premiere of the track here:

Your EDM sat down with Fytch last month to ask him about how he came to merge his styles, what he loves about bass music and how he sees his tracks evolving in the future.

Your style seems to run the gamut between R&B, dubstep and trap. What inspires you about heavy bass electronic music?

My inspiration comes from music itself rather than any genre in particular. I enjoy producing electronic music because it gives me the ability to mold the entire pallet of sounds rather than just one element – which is the limitation when I am composing for piano or guitar. The way I see it, it’s like 200 years ago you gave a classical composer an entire orchestra at his disposal any time he was composing, and he would have instant feedback of the full sound of his work. Today, technology has brought these capabilities into portable formats, so it’s this level of control and workflow that inspires me to make electronic music. Another important reason is the fact that working digitally gives me the ability to shape sounds in crazy ways. Getting to play around not only with notes and arrangement but also with the texture and timbre of every sound presents endless expressive opportunities.

It seems that recently you’ve begun to make more melodic tracks, where your style used to be quite heavy and glitchy. What inspired you to change or evolve your style?

Melodies have always been central to my music. Going all the way back to “What If I Told You” in 2013 and “Raindrops” in 2012, I’ve always tried to incorporate my experience composing for piano and guitar into the digital realm. However, you’re right to say my music has changed and this has been an ongoing process ever since these earlier tracks. Part of that happens organically as I gain technical experience in production, and part comes from consciously defining a sonic aesthetic and refining it over time.  The most recent developments have been focusing on more vocal-centric music, as I look for vocalists to bring something new and personal to each song.

How did this track, “Change Me” come together?

I came up with the intro guitar riff for “Change Me” over last winter break and slowly worked it into a full track over the Spring Semester. I like to work on projects as if I was playing correspondence chess; every once in a while I’ll go in, make a move and then let it rest. This way, I make time work for me and I keep a fresh perspective on the material. I had worked on “Just Like Gold” with Naika a few years earlier and I thought her voice would fit nicely so I got in touch with her again.

How did you find Naika as a vocalist to work with?

I met her through my group of friends at Berklee College of Music and we also became friends. She has very strong vocal ability with a distinct character that stood out to me. As soon as I had something that fit her style I sent it over to her.

How did you match the beats and synths on “Change Me” with Naika’s voice?

The instrumental and vocals work well together because Naika wrote the part when the music was already fleshed out. Once we did the vocal session and I had the final takes, I went in and made adjustments to put her voice in value. This includes changes in arrangement whereby I took out certain elements that were in the same range as her voice. I also replaced elements of the drop to give her more space, and the final mix brought out a certain synergy between all the layers of the track and made the vocal shine before mastering.

“Change Me” is sort of a cross between dubstep and trap, yet still manages to have a very chill vibe. How do you think you achieved the balance in the track?

There are a few things that help “Change Me” balance this heavy and melodic aspect. In the intro the sustained piano chords create a nostalgic atmosphere which then washes out into a spacious pre-chorus. Introducing dynamic contrast here by taking elements out and leaving the piano in focus emphasizes the effect it has in the intro, and leaving a ton of space for Naika to be expressive as tension builds definitely helps that chill quality. In the drop, there is a lot of energy emanating from Naika’s voice and the drums, but I also included a pad playing a melody in the background. This synth plays a sustained articulation like the Bass, which makes them blend, and thereby helps define the harmony to complement the vocal. This in turn helps to retain the melodic aspect in the heavier section. The middle part is characteristic to the mellow aspect as I’ve mostly taken out the drums to make a smooth flowing ambience. The granulated guitars coming out of the drop make it feel like you’re hanging in limbo and when the low end comes back with the second pre-chorus, weight is added but background effects and Naika’s voice interact and keep the melody moving forward. To summarize, I would say it’s the constant presence of harmonic and melodic elements that keeps the track chill. Furthermore, these are adapted to match the energy level of each section, mostly through manipulation of their texture and articulation.

Do you think that some of the slower (140-150bpm) bass music is starting to merge in the way you’ve done in “Change Me”? What do you think is exciting about this type of evolution of subgenres?

It’s very hard for me to think of music in terms of BPM. I would say the most exciting thing is seeing producers step away from genre and subgenre classifications. While genres may help promote music, from the artistic perspective they keep the artist locked into a set of conventions. If you follow these conventions closely everything you make starts to be compared with other producers working under that specific genre. This sets limits on creativity and innovation, as the music becomes a competition of who can make the best music within those specific restrictions. What I am seeing more and more of is people who are impossible to classify under a specific genre and who keep evolving their aesthetic – this is what I will continue to strive for, as I believe it will pave the way for new and exciting innovations in electronic music.

So you’ve just remixed the San Holo track, “The Future” for a remix album he’s doing. How did that come about?

It came about very organically, I was approached by Heroic, liked the original tune and decided I’d have a go at it. I don’t really know San personally but I worked on another remix in the past which I wasn’t quite satisfied with – this time I was very happy with the final outcome!

It seems like the remixed track retains a lot of the original structure, but it’s a more dark, pensive beat. What was your goal in terms of the remix? What did you want to change in the track while maintaining its integrity?

My goal was just to explore a different perspective of the same idea. The fact that it’s dark and pensive is mostly because that happens to be the kind of atmosphere that resonates with me the most, but it’s also because it provides a contrast with San’s original. To maintain integrity, I just stuck to the same BPM and used the format of the vocal to keep the same arrangement. These weren’t conscious decisions though, it’s just how the remix unfolded. I don’t hold integrity so highly when we’re talking about remixes – I prefer to hear something wildly different, than something restricted by the bounds of the original.

What’s coming up next for you?

I have a new collaboration in the work with another Berklee vocalist and I am working on getting some instrumentals out to rappers. I had a lot of fun doing hip hop mashups by taking classic rap a capellas and creating new instrumentals for them in the past. This is my way of getting back into that!

Keep up with Fytch and his releases, especially his San Holo Remix, via SoundCloud.