There has been nothing but buzz, buzz and more buzz since the release of “Lighthouse” by Ookay and Fox Stevenson on the Monstercat label. The two are currently in the middle of their “Wow! Cool! Tour” with stops loaded across North America where they are combining DJing with live-instrumentation. To talk about new music, new tour, and miscellaneous fun, we got a chance to chat with Fox Stevenson.

From your days getting into music with “Music 2000” on PlayStation to your time as Stan SB to now bouncing between releasing on labels like Spinnin’, Monstercat, and more, how would you describe the ups and downs of your music career?

To be completely honest, I try not to give into either. I think if you feel the highs too hard, you can become complacent or arrogant. If you let the downs defeat you, it can be hard to feel like it’s all worth it. But It really is. Instead, I prefer to just find joy in what I’m doing at the time. I focus on the fact that I do what I do because I love it.

You said you’ve had a deep-seated love of the music from songwriters like Counting Crows, Imogen Heap, and Ben Folds among others. How do you think they do or don’t influence your music?

All of these are really good at having really interesting, melodically-rich instrumentals, but still managing to let the vocals take center-stage in the composition. That’s one of the things I take away from them, that and songs that aren’t just shitty, thinly-veiled metaphors about hooking up after the club.

Back in January, I was on a mini tour here in the US and had some time off in LA. So I was just making stuff at a studio. Then a sketch that later became “Lighthouse” came into being, like most tracks do. It just kinda suddenly suggested itself. A few nights before, I had played at Space Yacht in LA and Abe and I had finally met in person and played back-to-back. So I texted him the track and the next day he came over with some vocals that really weren’t far off what it is now. We pushed through the instrumental together, and over the course of a couple hours and one taco run later, the tracks was basically done! The rest was just tightening up everything, and that took a WHILE [laughs].

Is the singing on the single you and Abe (Ookay) or just you? Can you describe how the process of singing and harmonizing went for “Lighthouse” compared to other songs you’ve worked on where you’re singing?

We went back and forth on a few different ways to do the vocals. We ended up opting for a mixture of the two of our voices in such a way that you can’t tell who it is that it can be either. To be honest though, the process of actually writing and making the final vocal sound wasn’t any different to how things usually are.

For the Lighthouse Tour with Ookay, it’s said that there’s a lot of live singing and instrumentation involved in the stage production. Will your sets also incorporate live elements (and what are they) or will  you be DJing in the traditional manner?

For this tour, I’m DJing and then playing drumpad stuff for “Lighthouse.” As for me going live… this is a topic I talk very big on behind closed doors and there is a lot I think people aren’t doing that they could be. By the end of next year, I want to have rewritten the rulebook on this through some vehicle or another. I can’t promise anything, but the live EDM thing is so in its infancy that it needs someone to take the bull by the horns and blow that all out of the water.

What are three songs/tracks that have been on repeat for you?

Ok tracks…”The 7th Sense” by NCT U, the Herobust remix of “Broccoli” by Lil Yachty & D.R.A.M, and the last one is a tie between two tracks from D.D Dumbo: Satan and Walrus.

Between touring and creating new music, what do you do to unwind from work?

For the last year or so, I’ve been bouldering a lot. It’s both physically and mentally engaging. So I find it takes me way out of everything else I would have been thinking about.

Are you still playing League of Legends? If so, who’s your main? If not, what has replaced LoL for you?

Anyone who knows what this means is gonna think and know I’m an asshole now but my main is Fizz.

What are you working on now? Is it solo work, collaborations, remixes?

A little of everything to be honest! Just finished a lot of work I can’t really talk about so I’m just enjoying the luxury of not really having a plan right now!

Make sure to check out the “Wow! Cool! Tour” to catch Ookay and Fox Stevenson perform “Lighthouse” and more from now until December. 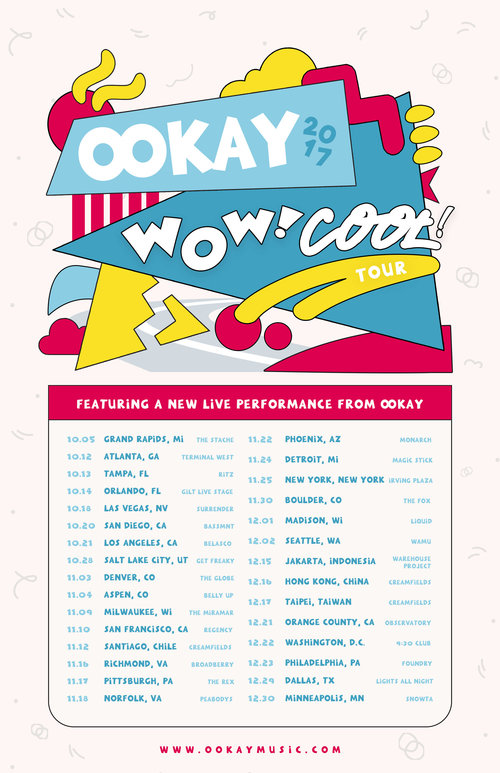