When you have Bassnectar, Ween and The String Cheese Incident all headlining a single festival, there’s one thing you can expect for certain: wooks. Normally, we wouldn’t look to Urban Dictionary for a formal definition, but for a wook, it works. UD defines a wook as “the dirty, vagranty variety of hippy. Almost always unemployed, following around jambands or festivals, and ripping people off.”

Note: this does not describe all fans of Bassnectar, Ween and The String Cheese Incident. But if this does describe you, you’re probably a wook.

One of the wook’s favorite activities is to consume psychedelics, including but not limited to LSD, magic mushrooms, peyote, and DMT. Now, DMT is a very peculiar hallucinogen, so special that it has developed a nickname as “The Spirit Molecule.” It’s hard to picture doing this at a festival, so why not take some home with you?

Some unnamed wook did that by disguising his DMT as his grandmother’s ashes on his drive from the annual Suwanee Hulaween in Florida to California. We’re not sure what route he took or if he was ever pulled over, but he clearly didn’t get caught with the goods.

Chalk one up for wook ingenuity, I suppose? But let’s just clarify – we at Your EDM do not endorse any of this nonsense. 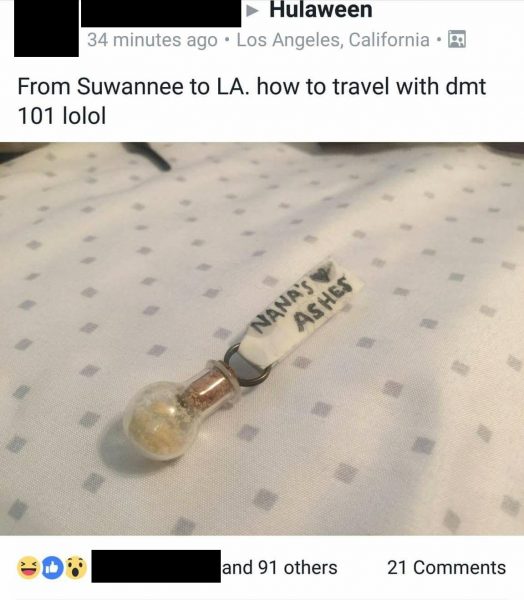