Drum&Bass Arena Awards Winners Announced: Some Surprises, Some Wholly Not Surprising [Link to show inside]

It seems that in the less than 24 hours since the Drum&Bass Arena Awards took place on Tuesday, December 5, there are two main talking points: first, Andy C is awarded best DJ again? And second, Camo and Krooked swept the awards, and well they should have.

There has been a debate pretty much every year after the D&BA Awards as to whether Andy C should be made exempt for award of best DJ a’la Qbert and the DMC Awards, because every year he takes it. A few suggestions always pop up around that: get rid of the category as DJing isn’t really a thing anymore, add different critera, open it up to the U.S. so Craze can have a shot, et cetera. One Facebooker even said at this point it should just be called “The Andy C Award.” There’s no good solution, really. As long as Best DJ is a category, Andy C will likely take it unless he retires himself from the category. In that case, we could legitimately re-name it “The Andy C Award for DJ Performance Excellence” like they do with the Arthur Ashe and Billie Jean King Awards in tennis. A new category could then be added such as “Best All Around” which could include label contributions, production and DJing, and Andy C would still likely take it half the time. He’d at least be in the top three.

Camo and Krooked is the other big story of the D&BA Awards, namely that they swept the thing. For their incredible and epic album Mosaik, they took Best Album and Best Track for “Ember” as well as Best Producer. They were runners-up in the Best Newcomer Label (Alix Perez’s 1985 took that one, well-deserved as well) and for Best DJ as well. 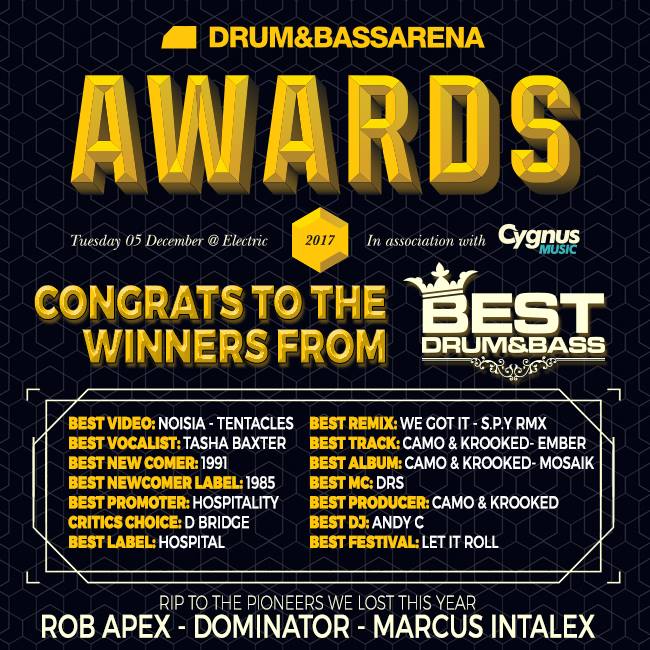 If the night belonged to anyone other than Camo and Krooked, it was to the drum and bass legends the community lost this year: Marcus Intalex, Dominator and Apex. The three fallen comrades were mentioned numerous times throughout the evening, as well as some other important heads we’ve lost. Host Pav dedicated the Best MC award to Stevie Hyper D, who passed in the late 90s, while his Co-host Jenna G paid homage to Marcus Intalex and his influence in putting Manchester on the map for UK drum and bass. Finally, Andy C gave the most emotional farewell to all three when he accepted his award. There was no getting around that this would be an emotional event, and it was likely very healing for both friends of the departed and the DnB community at large to address the losses at the ceremony.

There were some surprises this year in terms of winners: Hospital took the award for Best Label for the fourth year in a row, and many people on social media disagreed, with third place Critical seemingly the Twitter favorite today. 1991 was named Best Newcomer, and while this was a bit of a surprise, most agreed it was well-deserved. DRS and Tasha Baxter took Best MC and Best Vocalist respectively in dual upsets, while Hospital surprised again for winning Best Club Night, which quite often goes to Fabric London. Of course, Fabric had its issues this year and is just getting back up to steam. A couple non-surprises (aside from Andy C winning best DJ, of course) were Noisia’s “Tentacles” for Best Video and Let It Roll for Best Festival. Because of course they did, that’s why.

Overall the Drum&Bass Arena Awards captured all the hard work everyone in this industry has put in, as well as the passion, the emotion and the love all the producers, promoters, DJs, MCs and press have for the community. The D&BA Awards definitely put an exclamation mark on the end of what has been one hell of a year in Drum and Bass.

To see the full results for the D&BA Awards including second and third placings, visit https://breakbeat.co.uk/. The Drum&Bass Arena website has also put up a link to the full show on its site and on YouTube. Click here to watch of press play on the player below.

Voting for Monstercat’s “Best of 2017” Compilation Is Now Open

Voting for Monstercat's "Best of 2017" Compilation Is Now Open