Although he was mentioned in one tweet regarding sexual abuse/misconduct accusations earlier today, Space Jesus has made the bold decision to pull from Datsik‘s ongoing “Ninja Nation” tour indefinitely.

See below where he is mentioned in the last tweet about his involvement in these accusations.

yall i have to delete my original tweet due to a request for privacy, here it is for the 3rd time! pls RT pic.twitter.com/WHnxXI9ptN

Although Space Jesus’ integrity was called into question, he has made an attempt to redeem himself in a much more transparent way than Datsik by recusing himself from the remainder of the Ninja Nation tour; you can read his statement below.

In Datsik’s response to the allegations, he heavily implied the tour would continue as planned.

Now, however, the future is looking rather uncertain for the long-time dubstep DJ/producer.

His show tonight in Des Moines, Iowa has already been cancelled while this continues to blow up on Twitter, where Datsik is a trending topic, and other social media platforms around the world. 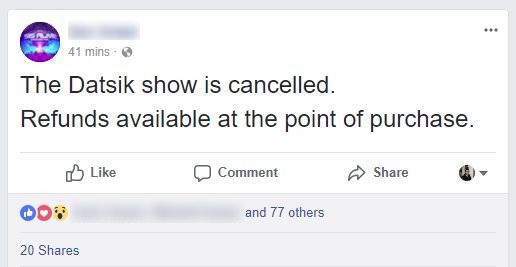 For continued updates stay tuned and be sure to visit our other articles on the topic.

EDM Reacts To The Sexual Misconduct Claims Against Datsik