Your EDM Interview: Enter the Mind of Mindscape – With the Second Chapter of ‘Reanimator’ Mindscape Gets Deep (and Not Just Deep Rollers)

Mindscape’s Reanimator EP series on Eatbrain is different conceptually from the way most multi-part release series are done in drum and bass and beyond. The first EP came out in December of 2017 and was dubbed Chapter I for a reason. Eatbrain as a label is known for its creative and usually creepy stories, written by members of Sonicode PR attached to each release that relate back to some sort of horror theme and more often than not to the label’s zombie face mascot. With the Reanimator series, Mindscape wanted to extend that storytelling not only to a number of chapters, but into the music in a much more concrete sense.

Chapter II of the Reanimator series came out May 28 and it’s clearly meant to be a continuation of the story. Not only does the written story continue, but it seems the music is also a variation on the sci-fi theme from the first chapter, which includes a mash-up of the well-known Eatbrain zombie vibe and more Frankenstein-style sci-fi. The result musically is somewhere between deep rollers, techstep and darkstep. With the MC work by Miss Trouble and the vocal samples used by Mindscape, the tracks and their progression feel like a story, or at least as if one is entering some sort of sonic inner world created by Mindscape. It’s a bit trippy to say the least.

When Your EDM sat down with Mindscape to discuss this EP and the Reanimator series, he gave a more concrete glimpse into that inner world he constructs with music. The Budapest-based producer is definitely existential when it comes to how he creates, and that pensive bent definitely shows up in both his music and how he views it. Listen and read now, and enter the mind of Mindscape.

This Reanimator Chapter II is supposed to be a continuation of the first EP. How do you see the story continuing on this EP?

It’s the second piece of the album EPs, so it is meant to be a straight continuation or consequence of Chapter I. They are fragments of the same project, so I’d say it’s the next part of the story, the next chapter of the book, or the next episode of the series. And just as in every story the tension is rising as we are heading towards the end game.

Style-wise, did you want to keep this iteration of the EP consistent with the first one, or is it meant to follow a narrative as well?

If you mean “secret laboratories sci-fi zombie vibes”, yes sure, I wanted to and will keep this consistent throughout the album. It’s not a difficult thing for me honestly, this vibe describes my usual style pretty much, so it’s quite easy to follow this narrative.

I’m trying to tell something different with every track, from another point of view. I don’t like to repeat myself, it’s not exciting to me to make the same tunes over and over. I hope the listeners will feel these tracks sound comparable, as they are all coming from my secret laboratory, without being repetitive, but diverse enough to hold their attention.

How do you see your style as evolving in general, since the first Reanimator and beyond?

As every producer, I love to learn new things every day, seek out new mixdown and production tricks, new tech or even new shortcuts. Style-wise I do what I always did. As the overall production quality in music and drum and bass in particular is evolving, I’m trying to keep my production level up to date, innovating while staying true to the roots, where the genre comes from and where I came from. Mixing the quality of the new and the vibes of the classics, the future and the past together, that’s what I see as my goal.

How did you come to work with Miss Trouble on “Desert Storm”? How did you put together the track with her unique lyrics and vocal style?

We were talking about a possible collaboration for a while when finally we were able to do a track together. I’m a big fan of Miss Trouble, her voice is unique and powerful and her lyrics are clever and impulsive, so I was thrilled when she sent those vocals over and keen to make a sick beat for them right away as they were so inspiring. We had a few sessions online to fix every little detail because we wanted to make it as perfect as possible, so I sent it back to her a few times until we were both totally happy with the outcome.

Obviously we have the continued theme of Reanimator on this EP, but it seems in this case not all the tracks are necessarily as blatantly zombie themed. Is there another subtext on this EP in terms of the titles of the tracks and how the release is arranged?

It’s still science fiction, horror, futuristic, creepy and weird psycho stuff, but I don’t want to force this theme too hard on every single track. If you listen to all the tunes you can’t stray from this theme (too much) and you’ll have the impression at the end that I would describe as dark evil sci-fi disgusting zombie fun or funk. I think it’s there (the zombie or sci-fi theme)  in every tune at some level. More evidently in some, under the surface in others. 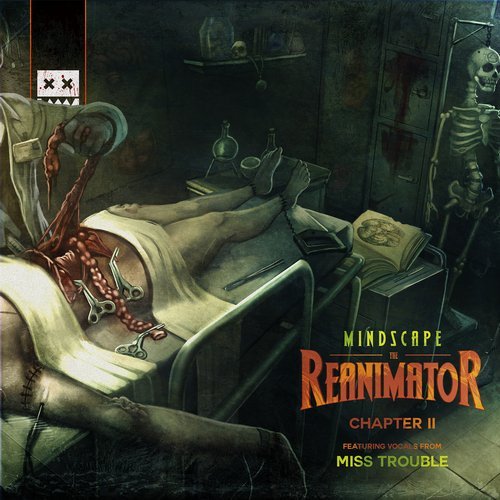 Most of the tracks seem to be heavy rollers on this EP, with the greatest variation being in the synths and basslines. Did you want these tracks to have sort of a rolling feel throughout the EP this time? Did your choosing of these tracks have anything to do with it being a summer release and near festival season?

That’s what I’m usually trying to achieve with my tunes, heavy and rolling vibes, with the lowest possible amount of sounds with lots of variations throughout the tune. Using those few elements to keep the tune evolving with them. I make tunes for myself too as DJ tools for my sets. That’s why usually I try to keep it heavy and rolling, because I play the same kind of tunes in my sets too.

Honestly I’m not that much of a summer person myself, I prefer it colder and darker, and it’s quite the same with my musical taste as well. I’m not really a fan of “happy summer music” business, but still love to perform on open air festivals though and I love summer nights with a cool breeze. In my experience grimy, heavy and rolling tracks can be working properly even on the happiest summer night too. If a tune is sick and catchy, it doesn’t matter if it’s cold or hot outside. I think actual mood can alter momentary taste, but weather conditions can’t change someone’s musical taste completely for the whole season. If a raver likes it heavy and rolling in the winter chances are the same person loves it heavy and rolling during the summer too. What could we do if those tunes make us happy?

Clearly this one just came out, but is there anything you can say about the third installment of Reanimator in terms of what fans can expect?

It’s not completely finished, and there are a few possible candidates for the four places on the EP, but one thing is for sure, there will be a feature by Mike Kryptomedic, and we’ve “gone sick” with that one! I have been testing the tune in action for a while and it does serious damage on every dancefloor. Wait, two things actually! There’s another track we are working on with the lovely MC Fedora, you might have heard about her already, she made a few big tracks with Chris.SU and other producers in the past and she released her first album recently.

Do you have any other releases in the works outside of the Reanimator series?

We are working on a collab with Jade these days, and I’m also finishing a remix for my friend Pythius, but it’s too early to tell more about that. I had a few more requests too, but the first and the most important task now is to finish Chapter III and to wrap up the whole “Reanimator” project, then I can work on other projects again.

Speaking of festival season, which ones will you be doing this year? Any other tour plans?

You can catch me playing on a few festivals this season: Beats 4 Love and Let It Roll in Czech Republic or Boomtown in the UK just to name a couple, and of course I’m playing in clubs here in my city – Budapest. There are no concrete tour plans yet, we’ll think about this when the whole album will be near to completion, which means in the near future.

Mindscape’s Reanimator Chapter II is out now on Eatbrain and can be streamed on Soundcloud or purchased on Beatport. Also check out his Eatbrain Podcast mix below.