The Dumbsteppaz, whose individual DJ names are Nazty and GZUZ, are a duo who began in Orange County but are now in Las Vegas and Denver, respectively. A lot of heads might not know it, but Denver and LV have decent working bass music scenes, and these two are always involved, if not at the helm. With their magnanimous Gone Jahmen Crew of about six DJs, the Dumb boys have been putting on crazy fun shows all around the southwest for over ten years, which are some of the most fun jungle and DnB shows one can find in this area of the country.

While Gone Jahmen is mostly jungle and amen-based drum and bass, when Nazty and GZUZ started working together, they specifically picked dubstep as their main means of transport for their sound. This was a response to the grumblings in the jungle and DNB scenes about the sudden prevalence of dubstep as a fad or not worthy of attention. The Dumbsteppaz wanted the grumbly old junglys to see it as both viable and its own thing, and with their very different approach to the 140 BPM beat structure, that’s what they did. To-date Dumbsteppaz dubstep tracks score high on the Beatport dubstep charts and their sets, either together or individual, are just as fun as Gone Jahmen shows and will force those jungle and DnB naysayers to look at dubstep in a completely different way.

It’s surprising that Dumbsteppaz’s first tracks on U.S.-based label Multikill Records would be jungle and amen-heavy drum and bass since they spent all that time establishing themselves as dubsteppers, but it makes sense when one knows the duo’s history: they’ll always be jungle and DnB, they’re just trying to be inclusive.

Your EDM thought it was high time to sit down with the LA bass music veterans and find out how Dumbsteppaz and Gone Jahmen crew work, what their thoughts are on U.S. bass music and where they’re going next. With more singles and a big album coming out soon, it’s likely that many more bass fans will be getting “dumb” shortly.

Can you each explain a little about your individual backgrounds and how you met and started working together (both DJing and producing)?

Nazty: I started producing hip-hop beats in high school which later turned into IDM and Drum and Bass. I met GZUZ at a Jungle event in 2007 and we started to collaborate on some ragga tracks. About a year later he had convinced me to try working on some Dubstep with him, our first releases topped the dubstep charts on Beatport and the rest is “dumb” history.

GZUZ: I used to throw a weekly drum and bass event in Orange County, CA called Freebass Fridays when I met Nazty. He was producing ragga jungle as Drum Unit with his buddy G Money and they invited me over to work on some tunes. We put out a release on Dub Chamber Records and after that we just kept pumping out tunes. At that time the LA drum and bass scene was starting to divide from drum and bass to dubstep and like true junglists, a lot of people weren’t accepting of this change. We started off just messing around, just trying to prove it was just another genre and ended up getting hooked.

You’re in different cities now, both putting on shows in respective cities and travelling to play at shows together. Is that when you get most of your writing done, or is it more remote?

Nazty: We don’t get to spend as much time producing together as we did in the beginning due to the miles between us, but we have always had a remote production type of relationship. We will start out with an idea or some samples and build from there. I will do the bulk of the production but constantly bouncing versions over for feedback on arrangements and sound design. Most recently with this newer stuff we are getting ready to put out, we have gotten some lyric and song writing assistance from our vocalist Miz Hyjak as well.

GZUZ: We definitely don’t get the production time together like we used to but Nazty does a great job making sure we all get to contribute to the process. Many late night face-time sessions in front of our laptops are the greatest to observe. They start off as serious business working on tunes then usually just turn into us making fun of the way each other look at the moment.

You each have backgrounds in jungle/DnB but also are clearly keenly into dubstep, based on your live shows. Why was it important to you for your first release on Multikill to be jungle?

Nazty: We honestly feel like we made a decent name of ourselves with dubstep, but after almost 3 years of not putting any music out, we wanted to embrace our roots while keeping the Dumbsteppaz name, letting the listeners know that although we were initially a dubstep project, we are expanding the name to Jungle, drum and bass, dubstep, or whatever else we are feeling. We want to make a wider variety of music now and want our listeners to not expect only dubstep from us.

The “Dumb Church”/”Law of the Jungle” EP is a very unique brand of jungle in that it’s very fast and sort of deconstructed. How did you come up with the idea of putting those tracks together?

Nazty: Both of these songs were made at the end of our current production run. We had a solid 10 or 12 songs together and were looking to put out a full length LP. The album seemed too light in the Jungle department, so we had to fix that. “Dumb Church” originated from a stand up comedy sample talking about “churches love dumb cunts”, we love samples with dumb in it. The title was changed to “Church” to make distribution happy and to give a nod to our old weekly we threw called Church. “Law of the Jungle” was the name of an old compilation from the 90s that heavily influenced my path toward Jungle Music, and we wanted to pay homage to that original stripped down bass booming style. 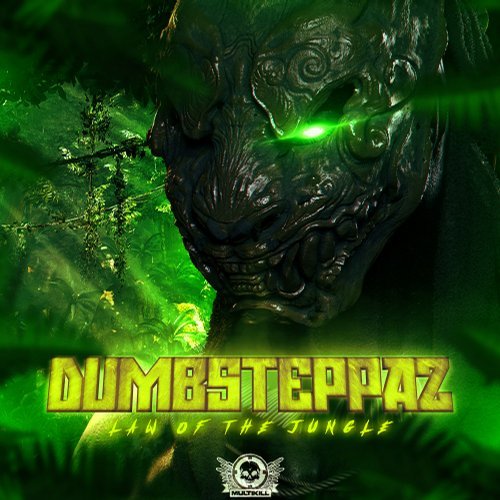 Was it tricky production-wise to have the tracks be so amen-heavy with a pretty minimal guiding beat?

Nazty: We used to get into the really technical chopping of amens, so it wasn’t that tough to get back in that mindset again. We always liked to produce dubwise-style tracks with the amen beats accenting the more straight forward DnB beat, we just flipped it this time and gave the amens the main stage for these ones.

Direct Feed’s remix of “Dumb Church” is a little more conventional. Why did you decide to include it with the other two originals rather than releasing it a little later? How did Direct Feed come to remix the track?

Nazty: Direct Feed has always been a close friend and production partner when we started this project. We have probably remixed each others’ songs four or five times previously, so it just feels right to give him the releases and he jumps on what tunes he is feeling. This time around he has been our go to guy for mixdowns as well, he has a great ear and is a great talent that we are so happy to have in our circle.

GZUZ: Listening to the original and Direct Feed’s remix I’m still surprised. If you go back to Direct Feed’s older jungle and drum and bass releases with any of his aliases (Chaos in Motion, Fixation, .Com) his tunes are all super heavy and dark with amazingly hard drum edits. If you look at our older jungle tunes which were primarily dubwise, you notice on this release we sort of reversed roles unknowingly.

You guys are part of a larger crew of DJs out of LA and Vegas, Gone Jahmen Crew. Are you planning any releases with the whole crew or other members?

Nazty: I have so much love for our Gone Jahmen Crew family, and would never rule it out, but we are trying to put all of our efforts into the Dumbsteppaz project again. We do have a bunch of collaborators on our upcoming releases that have either added vocals or remixed a track or two.

GZUZ: I’ve been a part of Gone JahMen Crew since its beginning and took the reins around 2005 when we put out our RAGGA FUCKING JUNGLE shirts and started to grow, so I’ll always want to include GJC as much as possible. Direct Feed is part of GJC and how we connected him to our work with Dumbsteppaz. Release-wise well always be under the Dumbsteppaz name, Gone Jahmen Crew is primarily now for when a big group of us get together to play out jungle or drum and bass. 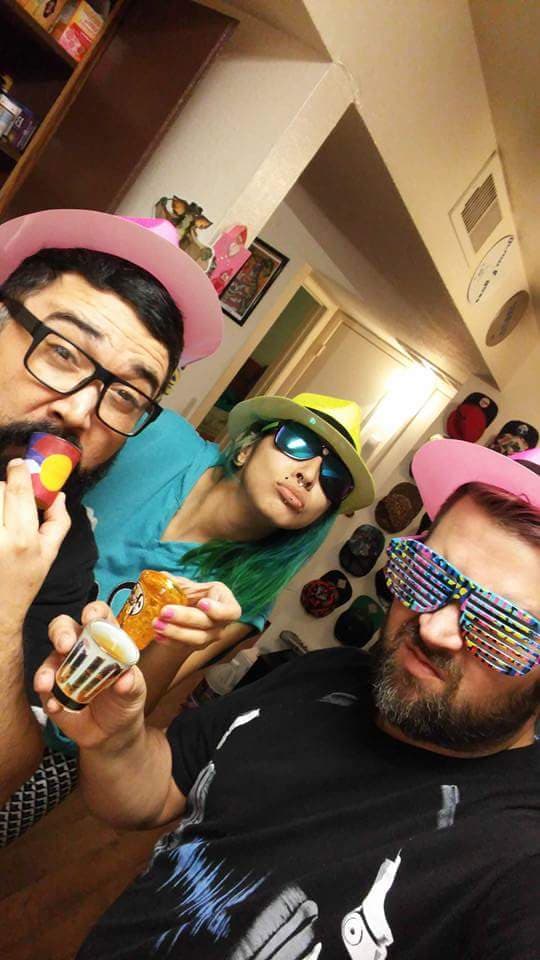 What other releases do you have on the horizon, and what other genres of bass music are you planning to explore?

Nazty: We have a new Jungle release coming up with MC Anti that we can’t wait for everyone to hear, the bass is so menacing and Anti is a beast on the mic. Stay tuned for that one before the end of summer. We also have our full length LP coming out on Rockers Dub end of summer with everything from drum and bass to dubstep to RnB bassy vocal stuff. We can’t wait to put it all out there!

GZUZ: The projects in the works touch a lot of areas and have plans to reach out to more. Hopefully, we’ll get to some of our half-time and future bass ideas. It’s always fun putting our “Dumb” twist on whats popular at the moment.

Since you guys have been working together for so long and know each other pretty well, so what’s one quirky thing each of you can say about the other in terms of your working together over the years?

Nazty: GZUZ would say I don’t take his notes on some tracks seriously, that’s really the extent of our frustrations collaborating at this point in our relationship. The distance between us has made us appreciate our past tribulations.

GZUZ: Repeating notes over and over until Nazty makes them used to be frustrating but not as much as an issue now. If anything the distance has made it easier to compliment him when he does surprise me.

Any upcoming shows for either of you or the whole crew this summer?

Nazty: Myself and Miz Hyjak will be going to Europe in August and will be playing in Bulgaria August 18th. We will try to pick up a few surprise shows while were out there. Stateside we always love the summer I Love LA events, so you will always be able to catch us on one of the stages or in the crowd getting down!

GZUZ: Once Nazty and Hyjak get back from Europe, working on getting all three of us united for a few shows, Denver, LA, LV for sure then any city who wants to get dumb!

“Dumb Church”/”Law of the Jungle” are out now and can be streamed on Multikill’s Soundcloud or purchased on Beatport, including the Direct Feed remix. Dumbsteppaz’s next tracks will both be singles from their upcoming album Decade of Dumb due out in September on Rockers Dub label: “Amen” will be out shortly and “Like a Black Hole” feat Miz Hyjak and MC Anti will follow in the lead up to the album release.