Your EDM Q&A: Jeremy Fitzgerald of Xcellerated Talks About Gearing Up for More ‘Innovation’

Jeremy Fitzgerald, or, as he’s known in LA, DJ Construct, has put his city on the drum and bass map with his hugely successful monthly club, Xcellerated. The promoter’s philosophy in booking and throwing parties has always been about staking the lineup with as many big names as possible with the intent of giving US heads the type of experience UK and EU fans get all the time.

Xcellerated just celebrated its five-year anniversary, showing that Fitzgerald’s work and acumen have paid off. He’s grown the Xcellerated brand, expanded into a bigger venue with three stages and is booking more and more crazy talent than anyone could have imagined. All this work is starting to pay off in other ways that no one could have guessed, including Fitzgerald himself: some of the UK and EU’s largest and best-known promotion companies are reaching out to partner with him and Xcellerated.

With a collab show already on the books last year with Belgian company Invaderz, this weekend will see a second joint show with the massive UK company, Innovation. Innovation is of course mega-famous for their Innovation in the Sun festival in Spain, but they also do loads of beach parties and “weekenders”. August 18-19 this week will be one of those “weekenders”, the first ever in LA with likely one of the biggest lineups Xcellerated has ever seen. It includes a club night on Saturday with headliners like Rene La Vice, Brookes Brothers and Original Sin, but  there is also a mega-huge boat party, also with two stages, three levels and another stacked lineup featuring DJ SS, Chimpo and Bladerunner.

Posted by Xcellerated on Wednesday, August 15, 2018

With all the anniversary and this crazy collab party going on, Your EDM thought it was time to ask the Xcellerated head himself how he feels about all this growth, how he’s managed to do it and what he’s looking at for the future. Turns out it’s a lot of work, a lot of gambling and a lot of love for the scene. Check out his thoughts as well as full lineups and ticket info below.

How did you come to work with Innovation on this project?

Someone from the Innovation team contacted me and spoke about our two brands coming together to do a collab.  Since I manage UNION and have a three year old there are no travel plans in my immediate future so I suggested that we do the collab here in Los Angeles, plus I thought it would be excellent for our scene here in LA.

Why did you think it was important to do the two parties, one at the club and the other on the boat?

Well first off, I am a huge fan of Innovation and I have seen their parties they do around the world.  They sometimes do these insane water park & beach parties, along with doing club nights and then daytime boat parties. They call them weekenders, so I thought it would only be appropriate to do a two-day show like they do and get a boat, plus it’s something different that hasn’t been done here before.

Both lineups are pretty stacked with hot artists, and you sometimes do themes to your parties to represent certain subgenres. Was there a theme or feel you wanted to have for each of the parties and the whole weekend?

Not so much, I did want the club night to look like a show they would throw back in the UK, so I wanted it to be extremely stacked, but I wanted it to be a bit diverse too so that everyone can find something that they are into.  Then as far as the boat I was looking for a particular vibe which I felt is boat party appropriate, again with a bit of diversity and fun.

For people who have never done a DnB boat party, what are some of the things they can expect?

This boat party is going to be insanely fun.  There are 3 floors.  When you first board the boat there’s one giant main room floor, then on the second floor there’s a sky deck where I’m putting a second outdoor stage, then the third floor will be a taco bar, because hey everyone loves tacos!  We are bringing some good production on the boat, along with decorations and there are multiple bars.

We board at 4pm with music and headliners playing then set sail at 5pm sharp.  We will see the sunset then cruise the harbor then see the Long Beach skyline light up then at 8pm we dock back and will have 30 more minutes of fun! 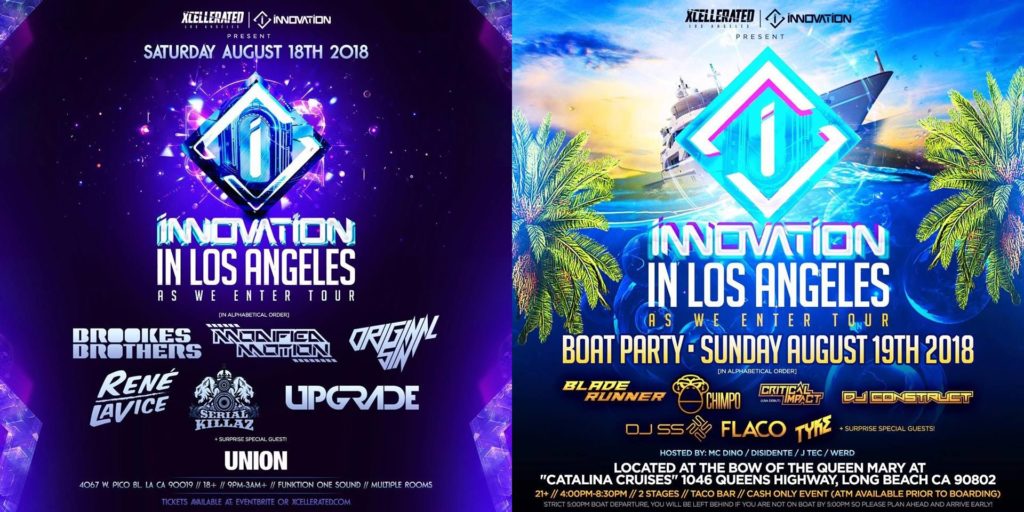 You just celebrated Xcellerated’s five-year anniversary. When you started the monthly event, did you have a goal to work with European companies like Innovation or Invaderz (last year), or is that something that developed unexpectedly?

Yes that was has always been a goal to expand, but no I never expected to collab with some of the finest in the world like Invaderz or Innovation, so it’s an absolute honor and incredible feeling to know that other big promoters out there are seeing my hard work.

What were some of the goals you had when you started Xcellerated? Do you feel like you’ve met/exceeded those goals?

I can’t reveal them all but many are coming into effect as we speak.  I’ve wanted to do a radio show but have held off because I know once I start it, I won’t see an end to it, so that’s something I have had on the back burners but will actually be debuting very shortly.  It will be a collaborative effort with Rough Tempo who’s a multi-award winning station, so Xcellerated will be the official USA representation of their brand.

No need to give away secrets, but in general how do you manage to come up with the huge lineups that have really put Xcellerated on the map? What do you think makes artists want to play at Xcellerated’s events?

Well, being a promoter is like being a bad gambler, you win some and you lose some, so with that being said I book artists, concepts, and vibes I like because at the end of the day, God forbid if I lose, I am not losing in something I don’t believe in or like.  I am very passionate about drum and bass and I try to push the next generation and do debuts featuring upcoming talent along with legends and just showing the scene who I feel are killing it around the globe.

What are some future goals that you have for Xcellerated?

Expanding the Xcellerated brand into a lifestyle company, much more merchandise, and a label in the works.

What advice would you give to someone looking to put on a monthly event in the US in terms of things to watch out for, benefits, et cetera?

Not step on others toes and be in contact with other promoters and be mindful of others that come before you so that you can help the scene rather than take away or split it up. The drum and bass scene is a community so the more everyone works together the more we will all thrive.

What has been your favorite part about doing Xcellerated for these last five years?